See Some, Miss Some

It felt kinda strange that some birds we saw one week ago in Baras were now missing, and on the other hand we saw a few species that were not seen then.

Our day started by seeing an Ashy Minivet perched on a tree branch not that far from where we had our breakfast along Jerez Street. It had been a while since we saw this bird here. 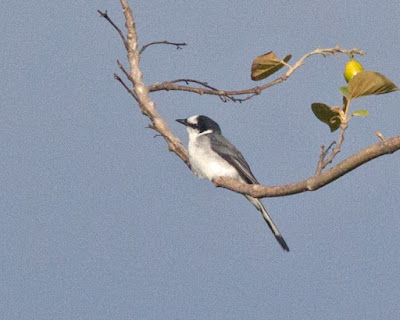 We proceeded to the area near the water tank and were surprised by some bird activities. Here we spotted several species that we didn't see the week before: Arctic Warbler, Black-naped Monarch, Philippine Pygmy Woodpecker and Elegant Tit.

What we missed were the Savanna Nightjar, the Little Ringed Plover and the Philippine Cuckoo Dove.

Thankfully we still saw quite a number of the resident birds here. The highlights of which were the Blue Rock Thrush (which we saw after three tries). The Stripe-headed Rhabdornis and the Philippine Hanging Parrot were both feeding on the red flowers near the clubhouse.

Posted by Bob Kaufman at 5:43 PM No comments: