Saturday morning, we decided to go birding at Palo Alto in Baras. The very first bird we encountered as we entered the subdivision was a Stripe-headed Rhabdornis. 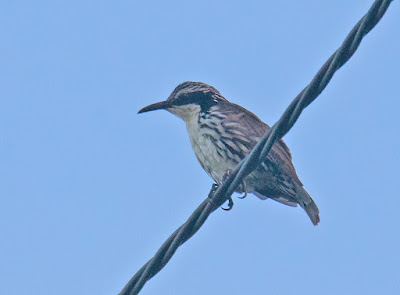 As expected, the White-throated (Brown-breasted) Kingfisher was at its usual perch on the electric wire. 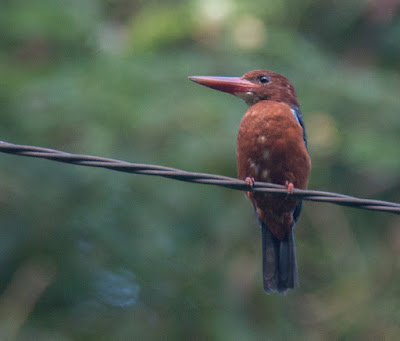 After having our take out breakfast, we moved on and saw the migrant Grey-streaked Flycatcher. Unfortunately it was backlit. 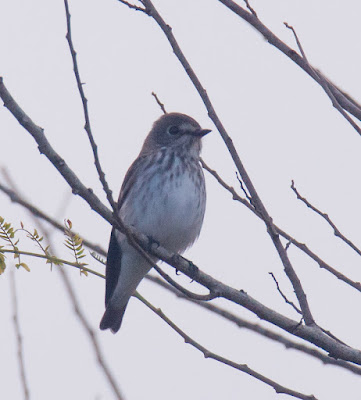 Along Alfaro road, near the waterway, we had a hard time focusing on the hyper-active Red-keeled Flowerpecker. 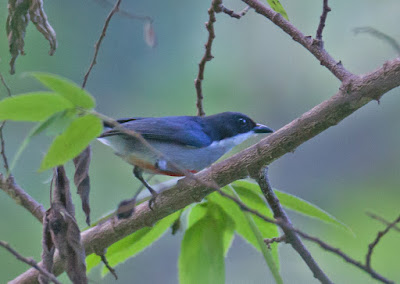 Moving on we got better shots of the usual denizens of this place: the Scaly-breasted Munia, Paddyfield Pipit and Zebra Dove.

We also saw a pair of Spotted Doves perched on a bare tree. 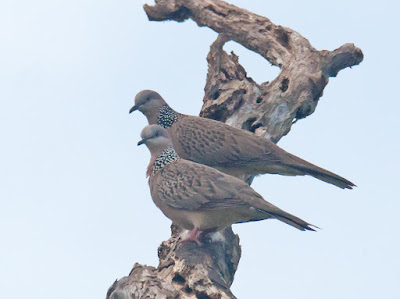 The Eastern Cattle Egrets were quite plentiful. I got a BIF (Bird in Flight) of one of them. 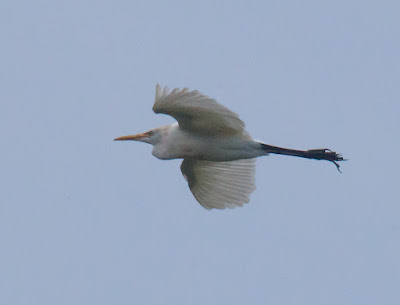 Back at the waterway, we were surprised to see a White-breasted Waterhen. This was the first time we've seen this species here. 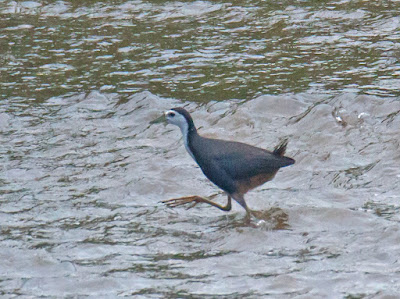 Along the creek, the expected Pied Bush Chats were busy hunting for prey. 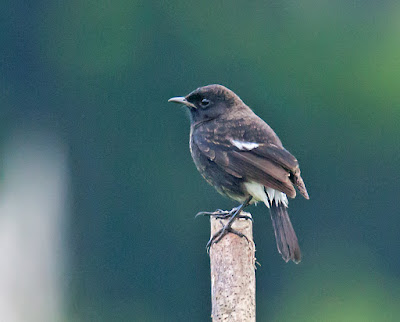 Since it is already the migrating season, I told Cynthia we should visit the rocky area and who knows the Blue Rock Thrush might be there this time. As we passed the area, we didn't see any bird at all. However as we were going back, I noticed a bird on top of the low cliff. "There it is!" I told my wife excitedly. 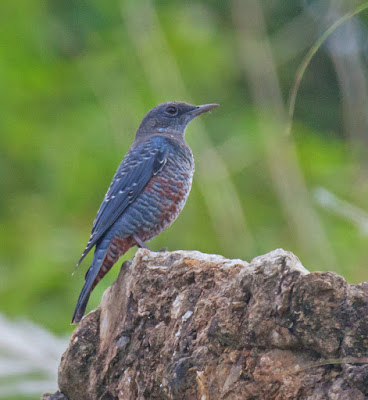 That was the highlight of our trip. As we were about to leave we chanced upon a big flock (about 20 of them) of Red Turtle Doves! 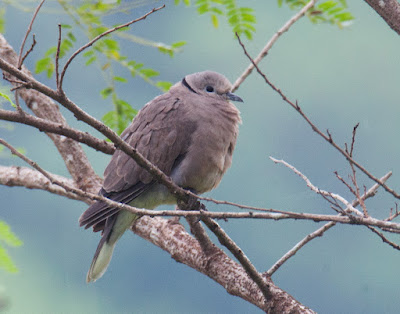 Near the exit we got a not too good shot of our last bird of the day - the Whiskered Treeswift. 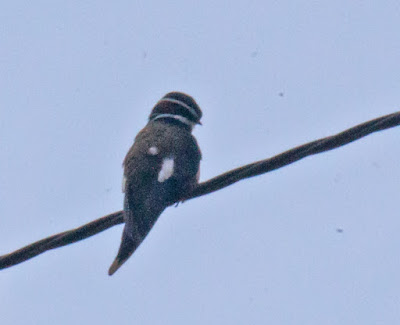 Posted by Bob Kaufman at 7:56 AM No comments:

Saturday morning we decided to go birding in Baras. As we entered Palo Alto, it was foggy and the road was wet. 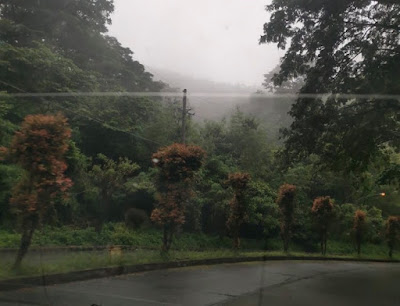 Doesn't augur well, I thought to myself. I opened my car window and looked at the electric wire at the other side of the street. "White-throated Kingfisher!"(or Brown-breasted Kingfisher - depending on which list you follow) I told my wife and started taking photos of it. 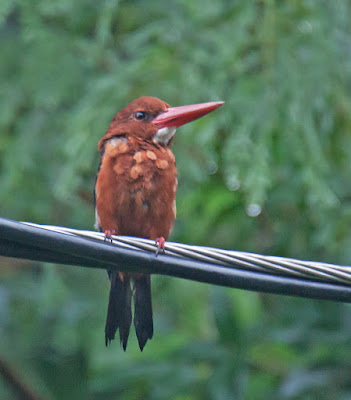 After having our take-out breakfast from Jollibee, Cynthia heard some singing. "Philippine Magpie Robin!" she said pointing to the very active black-and-white bird. 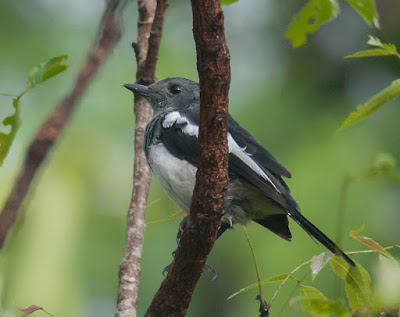 From there we moved on and got the expected Pied Bush Chat pair.

At the East Road we encountered a Spotted Dove. 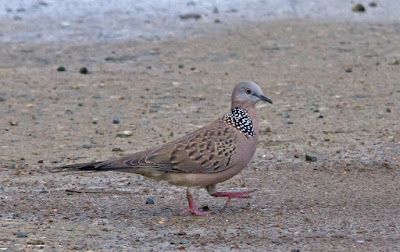 We were surprised to see two species that are usually staying on the grassy areas perched on a tree limb. The male Pied Bush Chat was so close my wife could not get a full body photo, with her shorter lens at that. 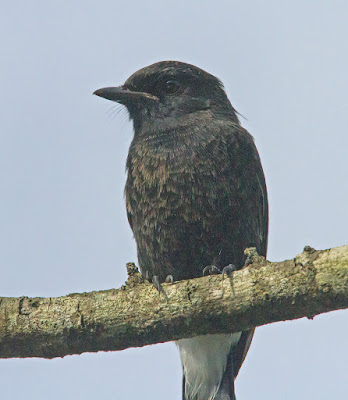 The other species was a Paddyfield Pipit drying itself in the morning sun. 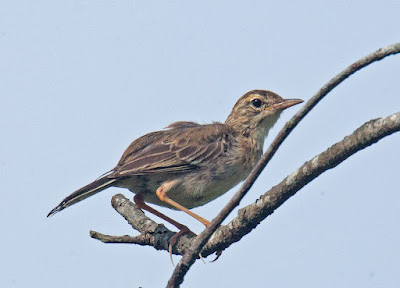 The Cattle Egrets were few this time and I managed to get a shot of an individual. 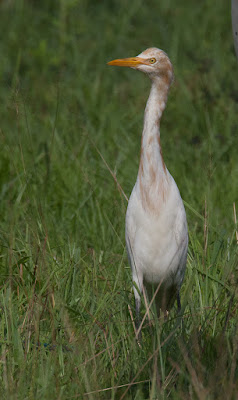 On the way to Cancun, we got the Collared Kingfisher. 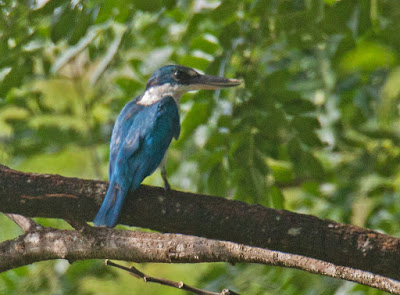 At Cancun, we were amazed at how friendly the Barred Rails were! 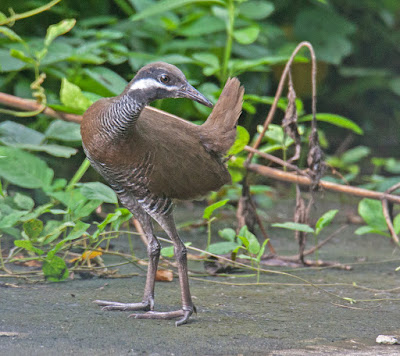 Not only the Rails but the Scaly-breasted Munias as well. 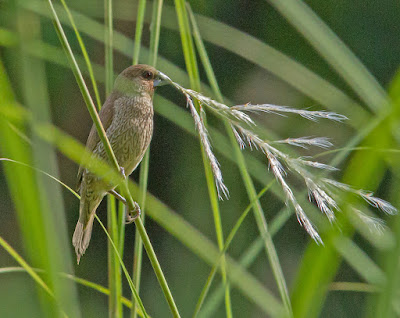 Near the water tank we were so sad to see a White-eared Brown Dove in a cage. Apparently it was a trap to lure other birds into that cage. 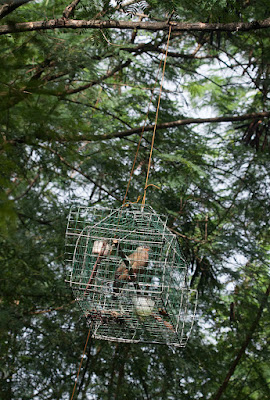 Inasmuch as the migration season has already began, we wondered if the Grey Wagtails are already here. We finally saw one at Jerez! 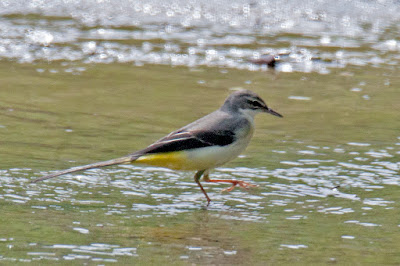 We also got a close up shot of a Little Egret. 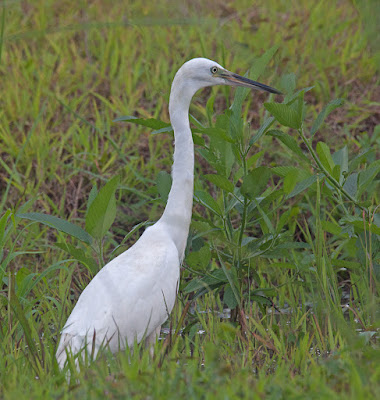 At the waterway, a Common Sandpiper finally showed up - again it was quite far. 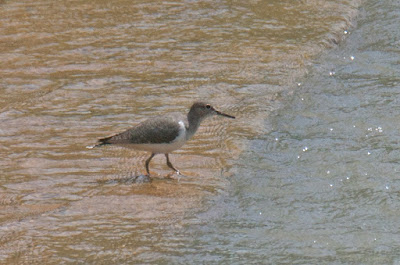 Of course, we had to take an obligatory shot at the White-breasted Woodswallow. 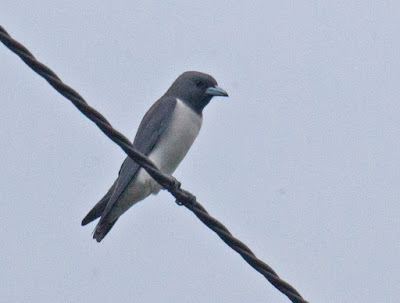 Around 10 am, we decided to call it a day. And as we were about to leave, guess what bird, we saw? - The White-throated Kingfisher, of course! The species we saw coming in, and the species we saw going out. 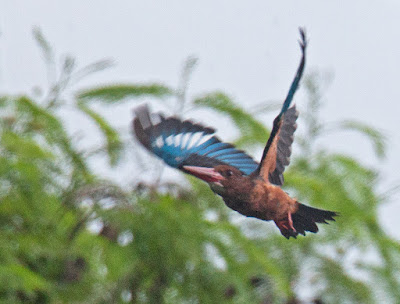 Posted by Bob Kaufman at 7:45 AM No comments: