Canyons to the Front of Them

The overcast skies of last Saturday was a great relief to the blistering heat of the past week. Southern California experienced record-breaking temperatures and high humidity. And so we joyously jumped into our Jeep and proceeded to our intended destination for that particular morning - Crystal Lake, high in the San Gabriel Mountains. As we negotiated the narrow and winding road, we noticed the fog getting thicker and thicker. Cynthia commented that visibility is down to 40 feet (actually, for me it was more like 20 because I wasn't wearing my glasses. But, of course, I didn't tell her that). About halfway up, we decided to turn around, lest we end up in the canyons below instead of the summit above.
Back on the freeway where visibility was again good, we decided to just go to the local nature center in Pasadena. There we saw the usual suspects - birds we expected to see there. We then tried a trail that we have not gone to before. As we approached a pile of rocks, I saw a wren that I thought I have not seen in this area before.
"Rock Wren", I whispered to Cynthia.
"Is that a lifer for you?", she asked.
"Not really", I replied, "we've seen one in Patagonia last year"
So we decided to stake out the tiny bird, since it was popping in and out of the rockpile. I had at that time my old camera body with my 300mm lens and a 1.4 converter attached to it. My good camera (Canon 20D) was out of commission and I didn't want to bring the 500mm monster lens at this trip. Now this camera (Canon 300D) was excruciatingly slow and does not do well in the kind of lighting conditions we had at that time (overcast skies, remember?). Nevertheless, I still managed to get a few shots of the bird, albeit not as sharp as I hoped them to be.
When I uploaded the images at home, it seemed to me that the bird did not look like a Rock Wren at all. (I just concluded, when I first saw it among the rocks..rocks..wren..must be a rock wren). Consulting my field guide, I was pleasantly surprised to learn that the bird we just saw was actually a Canyon Wren! Now that was a lifer for me! Thinking back..we were at Eaton Canyon Nature Center, so I should have concluded canyon...wren...Canyon Wren! We are always smarter at hindsight, aren't we? 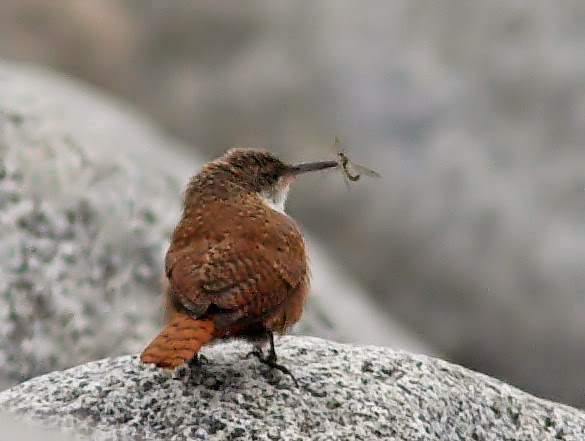