Nowadays my birding activities are being relegated to the background. Of course, the much needed heavy rain last Saturday morning made that decision a lot easier. Despite my wife's suggestions that we do our bird photography after the rain stopped, I just didn't have the enthusiasm for it. (And to think that there were some birds that can be twitched - the Magnolia Warbler in Sepulveda, for example).

What remained forefront in my mind was that three weeks from now I will be out of work. The current slump in the housing industry forced the company that I work for to take some drastic measures. One of which was to offer a "Voluntary Severance" package to those who would want to leave willingly. After much prayer and deliberation, I decided to take up the offer. I already informed my supervisor about my decision last Friday and tomorrow, Monday, I will be submitting the signed contract which will make my departure on Oct. 15th official.

This decision was punctuated by a sad incident that happened last night. Cynthia and I attended the 60th birthday party of one of her friends. As in any Filipino gathering, the food was sumptuous and the company vibrant. We left after a couple of hours since we still have a long way to drive. Today, Sunday, we learned that one of Cynthia's friends who was there at the party, Raul Roa, suffered a stroke later that night. The presence of mind of some of the party-goers saved his life although he is now in a self-induced coma and being observed at Kaiser Permanente.

Which made my choice to quit my job even more timely. At least for now, I will be free from the stress of the daily grind - which has been happening quite frequently lately - and benefit from the generosity of Indymac Bank. Life is short, and the Good Lord, in His great mercy and faithfulness, has given me this opportunity to take a most welcome respite and enjoy His blessings. 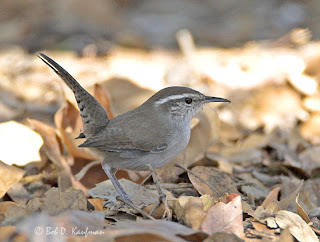 Maybe I had such high expectations or maybe I just wasn't thinking logically when I made a decision to visit Placerita Canyon yesterday. Fall migration was in full swing and I just thought that the canyon would host the usual number of warblers and vireos. I could not have been more wrong! The place was almost completely birdless! Normally, just at the parking lot, we would see Sparrows, Kinglets, Mourning Doves and Starlings. None of these birds were present that Saturday.

We moved on to the picnic area, another place that is usually swarming with birds, but other than a single Oak Titmouse, it was very quiet.

At the trails, a few Towhees played hide and seek with us. Near the bench, where we had Lazuli Buntings and several warblers in our earlier visits, a lone Wilson's Warbler foraged among the leaves high up an oak tree.

After more than two hours of birding, we still have not taken a single shot of any bird at all. My wife, seeing the bewildered look on my face, suggested we go to Eaton Canyon in Pasadena. I agreed, half-expecting to encounter tons of people walking their dogs as was the usual case there on a Saturday morning. To our surprise, there were only a handful of human beings and zero canines at all! But then our birding miseries continued as I only had acceptable photos of a forlorn California Towhee and a cooperative Bewick's Wren. Cynthia remained scoreless even up until the time we had to leave for lunch.

That night as I was reading the various birding listservs in Yahoo where some rare birds were seen, I can't find a really good reason why I chose going to Placerita Canyon instead of going to Malibu lagoon to "twitch" for the Yellow Wagtail or even to the Laguna Tams in Ventura where a Blackburnian Warbler was found. Perhaps I was bothered by the imminence of soon losing my job and made me consider not spending much on gasoline and therefore choosing a location much closer to home.

I don't feel bad a lot of times but this time "I'm wild again, beguiled again, a simpering, whimpering child again..."
Posted by Bob Kaufman at 9:14 AM No comments:

The Call of the Arctic

Sub-zero temperatures. Polar bears cavorting on ice floes. Orcas hunting sea lions. These are images that are conjured whenever the word "arctic" is mentioned. But then, there is also the Arctic Warbler, a small, non-descript olive-brown bird with a pale "eyebrow". As its name implies, it inhabits the cold north (mostly Eurasia and Alaska) during summer. In autumn, it migrates to the warmer climates of south east Asia (including my native county, the Philippines).

So when news spread that not one, but two, Arctic Warblers found their way to the oasis of Galileo Hills, hard-core birders from Los Angeles and environs dropped everything they were doing and headed to the Silver Saddle Ranch Resort. Since no self-respecting birder would allow something short of a miracle like this pass, we decided to become part of that enthusiastic group.

When we arrived a little after 8 am, we found a throng of "paparazzis" already hounding one of the celebrities as it flit from tree to tree. It wasn't long before we too joined the photographers in recording southern California's ornithological history. When news that a second Arctic Warbler was found in another part of the resort, the guys with the heavy guns heaved their equipment on their shoulders and galloped over to the location of the second celebrity. We chose to stay with the original. This time we concentrated on the other warblers foraging in the foliage above us - and there were plenty! We had Wilsons, Yellow, Nashville, Townsends, Hermits (a lifer!) and a female American Redstart. 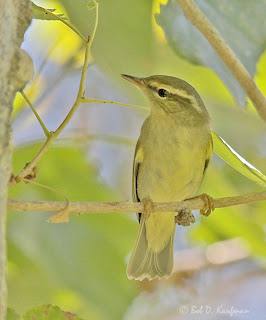 Soon the boys with the big toys returned and once again stalked the Arctic Warbler in our area. It was fun watching the photo dudes lift up their tripods and reposition them everytime the warbler moves to another tree (which was quite often) oblivious to the numerous, and occasionally noisy, admirers below. 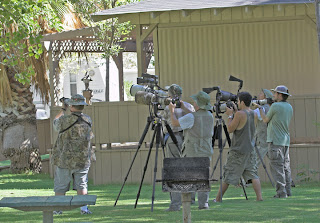 As noon approached, the number of photographers dwindled. Soon they were replaced by late-coming birders asking the same question: "Have you seen it?" By that time both Arctic Warblers have flown to destinations unknown. And we can only regale the newcomers with tales of wonder.

Saying goodbye to new friends, Mr & Mrs Tom Miko from Claremont (he is a very enthusiastic twitcher and a really fun person), and Mr & Mrs Christopher Taylor (he has more than 700 species on his birdlist! and son of the famous Monte Taylor of Calbirds fame), we left the beautiful Galileo Hills with two lifers under our belt.

"We should visit this place again", my dear wife said.

Those words could not have been any sweeter to my twitching ears.
Posted by Bob Kaufman at 9:58 AM No comments:

It would be unthinkable for me to have a three-day weekend and not go birding at all! Heat wave notwithstanding, we set off to Peter's Canyon in the city of Orange, if only to see the Roadrunner that frequents the area near the Ranger's station.

Getting to the canyon wasn't as easy as we thought because "Kit" (from an old TV series called Knight Rider which has a talking car) our GPS guide kept telling us to take Route 261 which was a toll road. Tightwad that I am, I adamantly refused to take Kit's advice and it (he?) kept saying "Turn back. Turn back". Finally silencing the GPS and just looking at the map, we arrived at our destination a little later than we planned to.

Just as we were entering the trail, a roadrunner came running. Towards us! Caught by surprise, we were unable to focus properly on the speeding ball of feathers. In a flash it disappeared among the thick tangle of bushes behind us.

Birds were few and far between as we traversed undulating trails, straining our inexperienced legs. Getting back to the Ranger's station without so much as a couple of yucky shots, I saw the roadrunner standing atop a picnic table. It was heavily backlit so we angled for a better shooting position. It must be our sweaty stench that gave us away for it abruptly sprinted to a low concrete structure and stared almost tauntingly at us. Nevertheless, stealth and patience paid off, as I was able to get off a few good shots. Cynthia was not as fortunate. 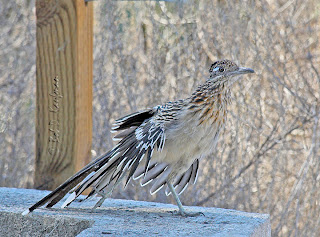 The heat was becoming unbearable so we bade goodbye to our target bird. We were already on Jamboree Road so I suggested that we visit Upper Newport Bay. Since we won't have to get out of the car in birding UNB, Cynthia agreed. Once again, there wasn't anything unusual. It was obvious, though, that the high temperatures were affecting even seabirds, as many of them had their beaks open (their way of cooling off, I presume).

We got the hint and headed for the comforts of home.
Posted by Bob Kaufman at 9:45 AM No comments:

I declared today, Saturday, Sept. 1, a non-birding day. No, I was not suffering from the onset of dementia. Let me explain:

First of all, the weather here in Southern California was what Paris Hilton calls "hhot!". How hot is it? It is so hot that the brain of a hatless person would be fried in a matter of seconds. Although it has been said that fried brain is a great fish food. Or is it that fried fish is a great brain food?


Anyway, the beaches would be much cooler, the weatherman said. And of course, all the population of this part of the great state of CA will be flocking there. So we won't even think of going anywhere near those places.


Second, my wife has an appointment at the lab for a you're in (I mean, urine) test at 7:30 am. That should take up the "cooler" part of the morning. Only the most masochistic of heliophiles would want to go outdoors past 9 am at these temperatures.


So what do we do when we are not going to be birding?


OK, those who know me must really think that I must be suffering from fried brain to agree to this.


But then I was promised a brand new pair of sunglasses. So there.


Mercifully, the covered parking lot was not yet full when we arrived at the Santa Anita Mall. We immediately proceeded to JCPenneys. Now I thought it was Cynthia who was suffering from dementia to go to a department store other than Ross or Target or Wal-mart. She must have read my thoughts for she immediately pointed to the price tags that read 50% off and then... additional 15% off if a JCPenney credit card was used in the purchase. Whereupon she suddenly whipped out from her handbag the plastic proof that would assuage my doubts. 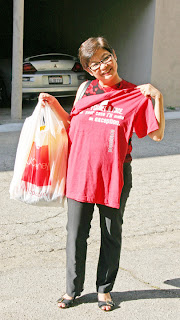 Satisfied with her shopping "duties" we then went to Solstice to get my Ray-bans. Despite my protestations upon seeing the price tag (no discounts here) she sweetly bought it anyway all the while telling me how good I look in my new set of shades. It's gotta be the extreme heat that made her act like this, I concluded to myself.


After a Philly Steak Sandwich and Hot Potato with Turkey lunch, we headed home.


And what do you know, I survived a non-birding Saturday without going berserk! I guess looking through a hundred dollars plus sunglasses helped. 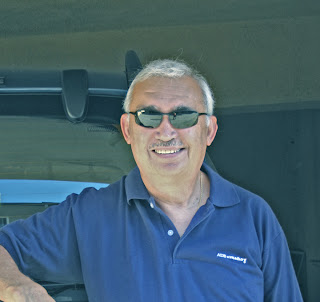