The brother of my wife's friend owns a resort in Lipa, Batangas but it was not yet open to the public. Inasmuch as he and his wife were in town (they reside in California) we thought it would be a good idea to visit them in their "farm". Cynthia had been there before, about six years ago, and she remembers the extensive forest cover that still exists in the resort grounds. She wasn't into birding then and she wasn't sure if there would be a lot of birds there.

Armed with a lot of faith and hope, we arrived at the resort owned by Andy and Agnes Puno. They welcomed us warmly and offered us fresh buko juice and sweet banana. When we informed them that we would be looking for birds, they told us that we are free to roam the 6 hectares of woodland at our own pace and convenience.

The first hour was quite discouraging. The resonant calls of the Coucals filled the morning air, but the birds were nowhere to be seen. Our hearts jumped when we saw a flutter of wings in a nearby tree. Our hearts then sank as quickly when I discovered that those fluttery wings belonged to a couple of Yellow-vented Bulbuls. I thought to myself, "We drove a hundred kilometers for this!". Now Yellow Vented Bulbuls are second only to the Eurasian Tree Sparrows in terms of ubiquitousness. They inhabit even the densest urban areas as long as there are a few trees nearby.

As we approached the house of our host, Cynthia heard the unmistakable call of a kingfisher. Looking up at the branches of the tall acacia tree, we finally saw the White Collared Kingfisher. Again, this is a bird that we almost always see at the University of the Philippines campus near our home. So far, not very encouraging at all, birding-wise. 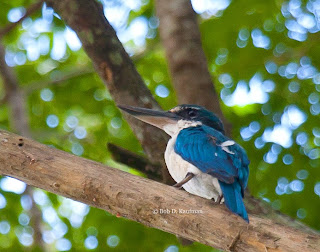 After resting a bit, we resumed our tour of the wooded areas of the resort. I contented myself at just taking pictures of the numerous butterfly species that flitted around. Suddenly Cynthia grabbed my arm and pointed at the coconut tree in front of us. Olive-backed Sunbirds were in search of food and creating a ruckus. 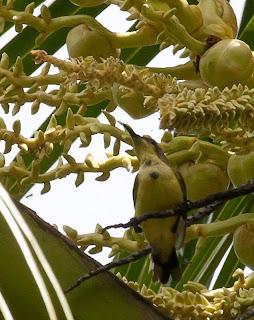 Things are starting to look good. Up the trail, we stalked a female Common Emerald Dove as it preened in the dark undergrowth. 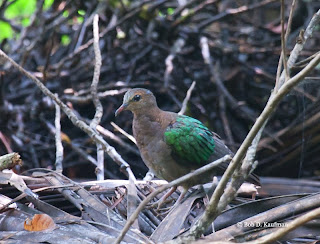 Then Cynthia heard the quaint tap-tapping of a woodpecker. Sure enough a Philippine Pygmy Woodpecker decided to drop by not far from where we found the dove. 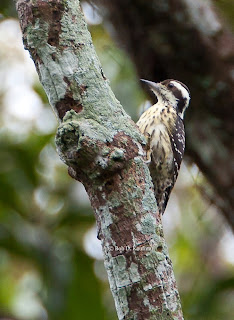 On the return route, we came upon a fruiting Macopa tree. The macopa fruit is bell-like in shape (hence the name) and is bright pink in color. Apparently it was also a favorite among fruit-eating birds. Well, at least, with the two species we saw feeding on them. One is the (ho-hum) Yellow-vented Bulbuls and the other is....the Red-keeled Flowerpecker! I can now honestly say that it was well worth the one-hundred-kilometer drive for this! With this tiny dynamo, we just got a lifer. 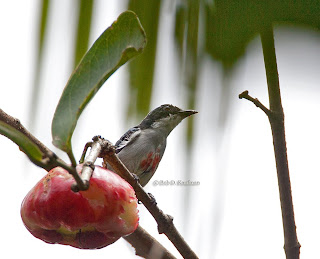 Happy that our faith and hope had been answered, we returned to the veranda overlooking the forested ravine. I was scanning the tops of the coconut trees with my binoculars when I saw something red move among the stems. With bated breath I fixed my attention on that particular tree. A few minutes passed and then it came into full view - the exotic male Purple-throated Sunbird! I told Cynthia to keep an eye on it while I fetch my big lens (all this time I had been using the 100-400mm zoom). At more than 20 meters away, even my 500mm could not do justice in capturing the gaudy colors of the male sunbird. Eventually the lovely bird flew off and it was then that we realized that it was almost noon. 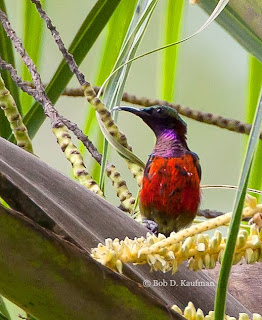 As we were packing and getting ready to leave, we were glad that even though we did not see a lot of birds, we were still rewarded with a lifer. We even resolved to return and maybe stay overnight at the guest house so we can bird really early in the morning. Now that is something to look forward to.
Posted by Bob Kaufman at 4:39 PM 1 comment:

In a span of one week, I visited the University of the Philippines (U.P.) campus in Diliman, Quezon City, twice! First, on a Thursday with my fellow bird photographer, Dennis Alfaro, and then on Saturday with my wife, Cynthia. On both days, the skies were as gray as can be. There were even times when it drizzled which had us scampering to the nearest shade. On a weather condition such as that, what birds could be seen? Not much, it turned out. On those two days, I only managed to photograph a total of seven species at the U.P. campus. Plus an Olive-backed Sunbird that my wife and I saw at the Ninoy Aquino Wildlife Park which we also visited last Saturday. 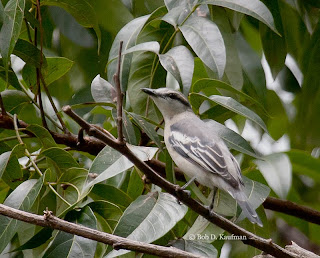 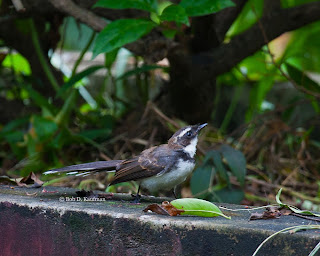 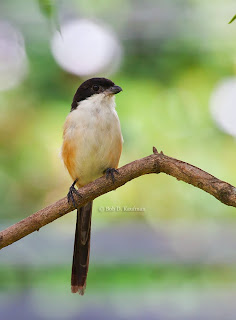 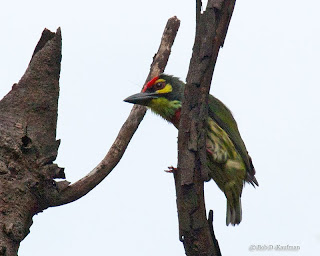 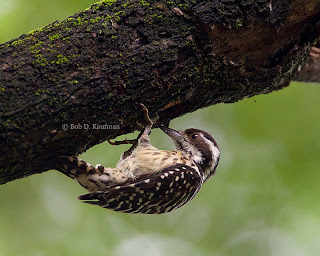 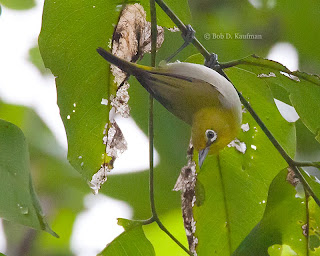 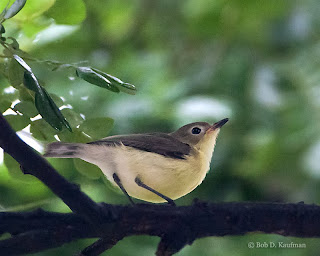 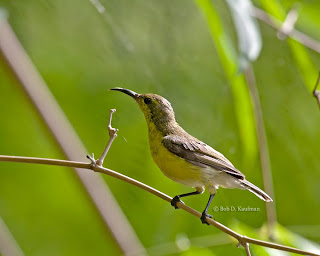 For other (more plentiful?) birding blogs and photographs, please visit:

First of all, I apologize for not posting to my blogsite as often as I would like to. When I was living in California, my blog got updated at least once a week. Now that I am here in the Philippines I realized that birding is not going to be a weekly activity. An important factor here is travel time. In America, I can be at a birding spot some 80 km (50 miles) away in about an hour. Which means I can leave Pasadena at around 6 am and be at San Joaquin Wildlife Sanctuary in Irvine around 7 am. That same distance would require about 2-1/2 hours travel time in the Philippines. Being a tropical country (which means an almost equal number of hours of day and night) birds get active quite early - usually before 6 am. Therefore, a birder must leave home before 4 am (and getting up from bed a bit earlier than that). Since it had been a while since I resided here, there had been a lot of changes in the street and highway infrastructure. In other words, it would be very difficult for me to visit the birding places on my own, even with the help of my wife, who had only been away for 5 years. In the United States, a GPS is a great help in taking me to places I have not been to before. Not so in the Philippines. From what I have heard (and seen, actually), a local GPS is not that accurate in navigating the roads and providing directions. So I rely on signs - some of which were not that accurate as well. Thankfully the local folks were always eager to help in giving directions.

Another factor in my not being able to bird as often as I could was the weather. We were now in the middle of the rainy season, and boy, when it does, it really pours. It would rain heavily for a couple of hours, then it would stop completely and the sun would shine through. But that condition is hard when out in the field. You just don't know when it would rain.

That said, Cynthia and I had an opportunity last Saturday to go birding. Two of our birding friends, Toto Gamboa and Dennis Alfaro, were going to Mt. Palay-palay, and we decided to meet up with them there. This will be the first time I will go there on my own. Armed with the directions given by another friend, Bert Madrigal (who drove us there the last time), my wife and I bravely set-off at 4 in the morning.

A little before 7 am, we parked near the entrance to the Puerto Azul resort. Toto and Dennis were already there stalking the Glossy Starlings noisily congregating on the treetop above us. Not seeing much, we decided to move on, leaving the two guys still photographing the starling flock.

Further up the road we noticed a Whiskered Treeswift family. I spotted an immature male perched on a branch above the road. The mom would fly in every now and then and give food to the young one which was already as big as the adult. Occasionally, the adult female would alight on a dead branch not far from the road and at an eye level even. This, of course, was the perfect photo-op, which I also experienced the last time I was here with my other birding buddies. Soon Toto and Dennis arrived in their car and after a little wait, they too, were afforded great views of the female Treeswift. 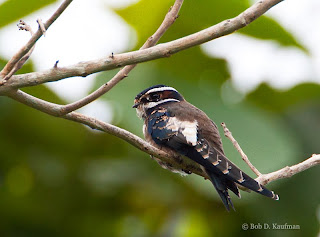 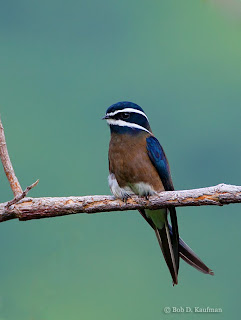 Once again, Cynthia and I moved on, leaving Toto and Dennis behind. This time we tried the new road going to Nasugbu. Here we got our only lifer of the day: A Pygmy Flowerpecker. As its name implies, this is a tiny bird (about 3 inches) but very active. Both male and female foraged in a fruiting tree, continuously making their "tip" "tip" call. Despite our diligent efforts, we only managed to get a few really bad photos of these little dynamos. 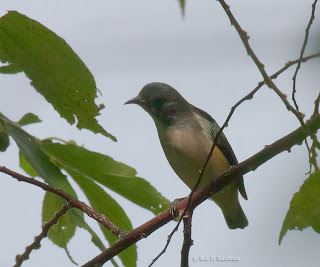 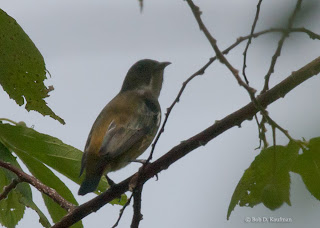 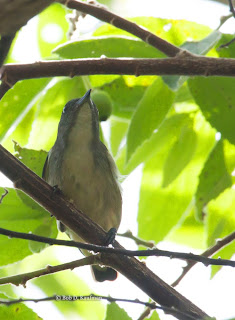 We met up with Toto and Dennis again at the gate of the Caylabne resort. Here a Philippine Coucal tried our patience by answering Toto's imitation of its call but frustratingly remaining hidden from view all throughout. Both guys were determined to get a glimpse of this bird and even hoped to see the White-morph version (which we saw here last time), so we bade them goodbye as we began our trip home. On the road down, Cynthia was able to take some shots of a pair Brahminy Kites soaring above us. 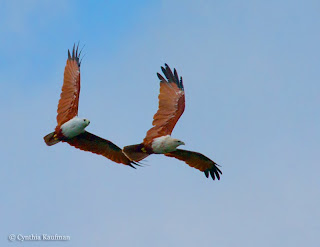 Back home, we were glad that we got a lifer and I was personally happy that I was able to make it to Palay-palay on my own. I am now wondering when and where our next birding foray will be. I guess that depends on when it will stop raining.

For other (less rainy?) birding blogs and photographs, please visit: