It had been quite a while since we seriously birded. At first we were still “getting over” our Hawaii trip and then I was under the weather for some time. Saturday, October 15th, we decided to drive down to San Diego on a two-fold mission: to bird Pt. Loma and to recover some of my clothes. Allow me to explain the latter. When I visited the Philippines last year, I left behind some clothes at Cynthia’s place (they were still being laundered at the time of my departure). Since then Cynthia had been trying to have those pieces of my apparel brought over by someone – anyone - who is coming over to the States. That finally became a reality when her aunt who attended Cynthia’s Tio Totoy's funeral, had the space to carry my clothes over. Her aunt of course, lives in Poway in San Diego County.

It was a bright and sunny morning when we left Pasadena. The moment we entered San Diego County, the skies suddenly turned gray. Undaunted, we continued on to our scheduled first stop – the Fort Rosecrans National Cemetery. Cemeteries are always good places to bird - the local residents don’t bother the birds at all. As we were getting off our car, another car pulled over next to us and disgorged two gentlemen birders/photographers. My kind of people, I told Cynthia. In a short while, all four of us were in a part of the cemetery called the “Dip” because the relatively level ground “dipped” slightly towards a ravine. There we joined several birders in looking up a eucalyptus tree. “Grace’s Warbler”, one of the birders whispered as he pointed to a tiny object flitting among the leaves 30 feet up. Training my binoculars to the constantly moving bunch of olive green feathers, I smiled as I saw my first lifer of the day.

We continued roaming the cemetery grounds and saw the usual birds – Black Phoebes, and their more colorful cousins, Say’s Phoebes, a bunch of House Finches and Yellow-rumps, and a Townsend’s Warbler, not as rare as a Grace’s, but pretty nonetheless. 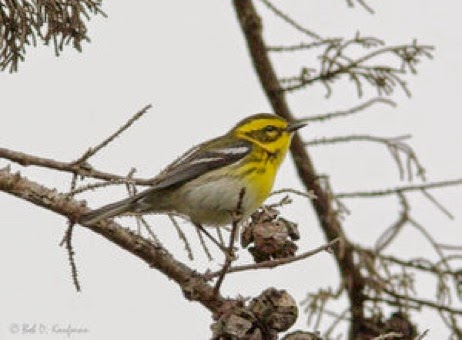 As we were getting back to the parking area, one of the birder/photographers we met earlier (we went separate ways after seeing the Grace’s Warbler) told us that he saw a Varied Thrush. Now not only is a Varied Thrush a colorful bird, it is also quite rare in southern California and this is one bird that I’m dying to see. We vigorously searched the area where the guy said he found the thrush but it was a no-show. Soon birders from the San Diego Audubon who also heard the news came and searched high and low but didn’t find the bird either.

Trying to stick to our schedule, we decided to go to the Cabrillo National Monument further down the road. After paying the $5 entrance fee (good for one week, we were told) we proceeded to the visitor’s center and inquired about the “Drip”. The drip is the one place at the park where birds are guaranteed to be seen. It is so called because in the middle of a clump of myroporium bushes is a faucet that drips into a red dish. This is where birds drink and bathe. We were informed that it was located not far from the visitor center so I grabbed my camera gear (with my 500mm lens) and rushed over to the “Drip”. We were surprised that there were already a flock (no pun intended) of birders there (many we already met at the cemetery).

I set up my equipment alongside the birders and their scopes and pointed my camera to the dripping faucet. Already bathing were a family of House Finches. Then coming in succession were the White-crowned Sparrows, Fox Sparrows, Orange-crowned Warblers and the highlight of the day, Golden-crowned Sparrows. 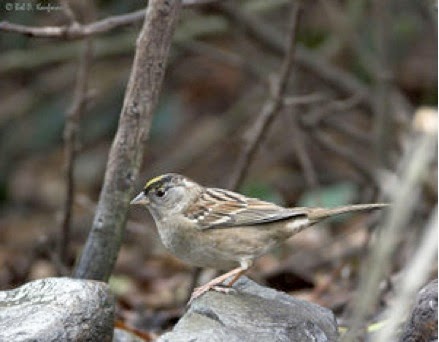 The rarer Clay-colored Sparrow and Green-Tailed Towhee were both absent. At about noon, and not seeing anything unusual, the birders slowly dissipated, us among them.

We decided to give the cemetery one more try (it’s along the way anyway, we rationalized) and see if we can find the Varied Thrush. There were still a group of birders there, holding a vigil for the now intriguing bird. After a couple of false alarms, one of the lady birders shouted, “There it is! There it is!” We all rushed to where she was and looked at the area of the fence that she was pointing to and sure enough, there it was, my second lifer of the day! 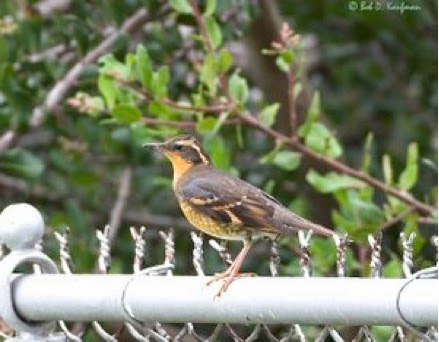 With hearts pounding and stomachs growling we finally went and had lunch at Arby’s. Somehow something as blasé as a roast beef sandwich seemed like a gourmet entrée when you just notched 2 lifers in half-a-day’s birding.

We arrived at Poway a little after 2 pm. After some family talk and being incredulous at the low rent rate that Tito Ramon and family were paying for their apartment ($375.00 a month for 2 bedrooms!) we said our goodbyes and left at around 3 pm. With still enough time to do another quick birding, we checked out a place called Blue Sky Preserve also in Poway. Other than a few Yellow-rumped Warblers, we saw nothing but blue skies (maybe that’s why this place was so named). On the way home we stopped by West Covina and had dinner at Salu-salo because Cynthia had this hankering for Pilipino food. To top off the evening we had fun dipping eggrolls in their sauce and seeing them dripping as we popped them into our mouths. Dip and drip – what a day today was!

Posted by Bob Kaufman at 5:50 PM No comments: