When our friend, Linda Gocon, posted photos of some unusual birds taken in Imus, Cavite, I thought "I must go there."

Early Saturday morning (June 26) my wife and drove to the place not that far from SM Center. Only to discover that the "birding" place was teeming with joggers, cyclists, and even motorcyclists. Forget about the Grass Owl I whispered to Cynthia. Thankfully, despite the abundance of human beings, there were still birds that inhabit the nearby grasslands. The most common of which (aside from the Eurasian Tree Sparrows, of course) was the Zitting Cisticola! 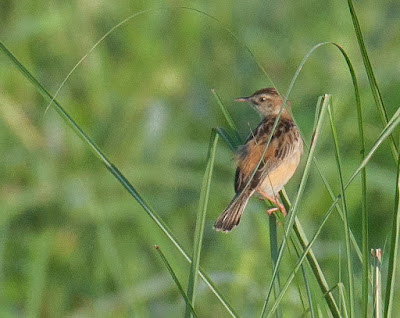 Something really weird happened next. We both saw some movement on the ground. So we both took pictures of the bird that was roaming around. I knew that my subject was a Paddyfield Pipit and I assumed that Cynthia was photographing the same species. However, when I was processing our photos at home I discovered that the bird my wife was taking pictures of was an Oriental Skylark!

Next came the doves: A Zebra Dove was also foraging among the grass. 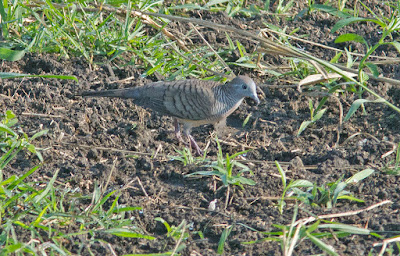 Cynthia was lucky enough to get a shot of a Spotted Dove making a landing. 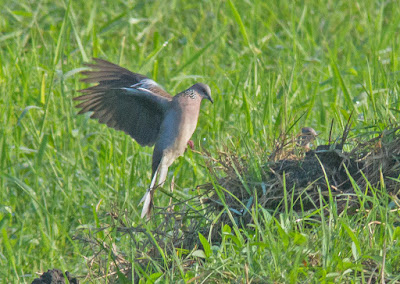 We then moved to a place where some trash had been piled up. From there my wife saw a Cinnamon Bittern in a distance. Eventually it flew off and of course, Cynthia got a perfect BIF (bird in flight) shot! 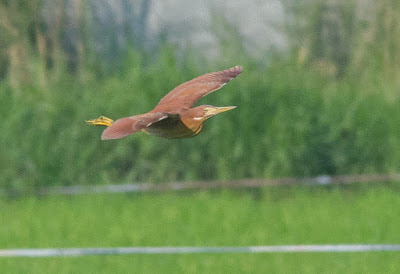 To console myself after failing to get my BIF shot, I took an obligatory photo of a Eurasian Tree Sparrow. 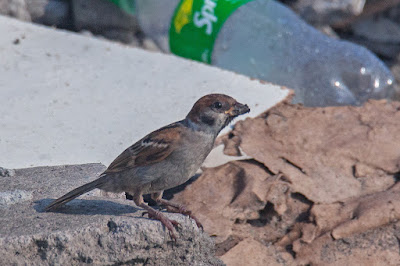 Speaking of BIFs, a couple of Oriental Pratincoles were flying around providing a challenge for us. 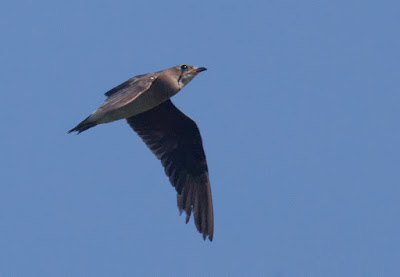 Cynthia's sharp eyes got her a White-browed Crake. From the roundabout, we proceeded to a road nearby. Feeding on the grass stalks were a horde of Munias - both Chestnut and Scaly-breasted. 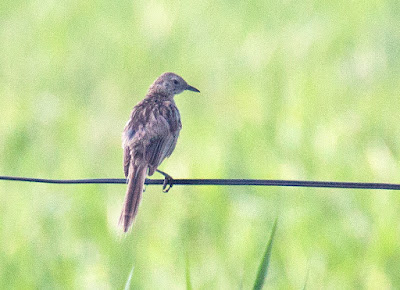 Near the narrow road, we were surprised to see an Intermediate Egret! 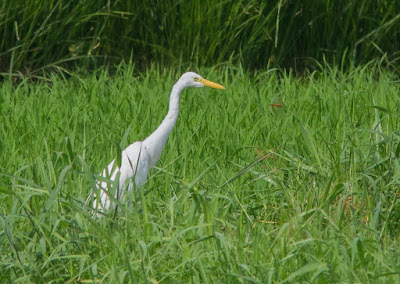 Perched on the electric wire were some Pacific Swallows 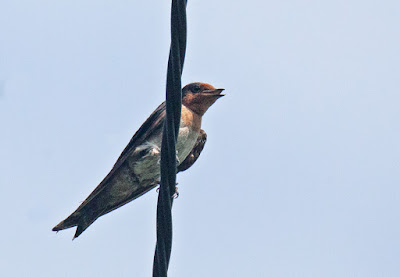 Past nine o'clock and we were soaked in our sweat, so we both agreed to call it a day. As we were about to leave, we got our "lifer" - penguins!!

Posted by Bob Kaufman at 8:10 AM No comments:

Since the pandemic, Baras had become a favorite birding place for us. For one thing it is not that far from our home - about 40 kilometers away. And of course because there are quite a number of birds to be seen there. Although the place we go to is a subdivision (Palo Alto), it has not been fully developed yet. The area is vast with various types of environments and there are only a few residential houses.

The morning of Philippine Independence Day we once again visited Palo Alto. We arrived at our destination in about an hour after undergoing through the nerve-wrecking experience of driving on a narrow road that was filled with countless bicyclists and motorcycle riders.

As soon as we entered the subdivision I saw a Philippine Magpie Robin near the entrance. I parked by the roundabout to unload our gears, a Common Emerald Dove swooshed across Cynthia and perched in front of her. I quickly handed over her camera and she was able to get some shots at it. 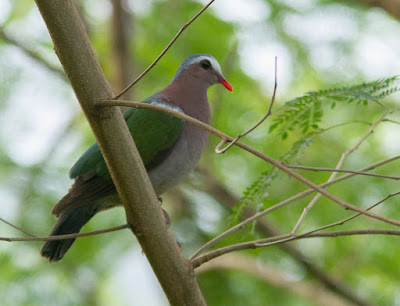 We then walked towards the place where I saw the Magpie Robin earlier. Even before we got there, my wife heard its call and eventually located the bird high up a tree. To high for a good picture so all I got was a "documentary" shot. 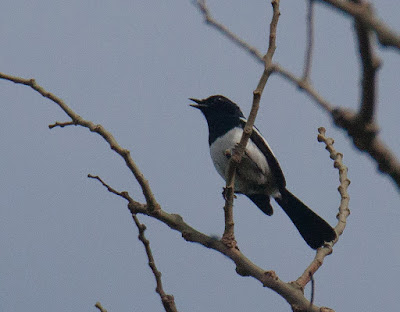 As we were returning to our car, Cynthia took a photo of a bird on a bare tree. I think it's a Philippine Bulbul she told me. It was only when I was processing the images at home that I was able to confirm that it was indeed a Philippine Bulbul. That was the first time we saw that species at Baras. 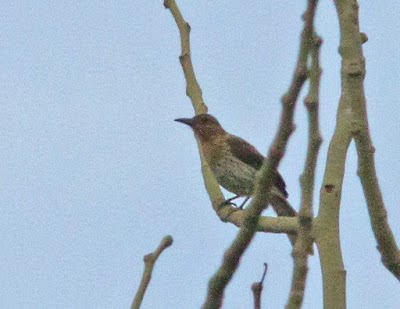 From there we proceeded to Campeche Road where we had our take-out breakfast from Jollibee. After breakfast we moved on to Alicante Road. Along the way a bunch of Scaly-breasted Munias were feeding by the roadside. 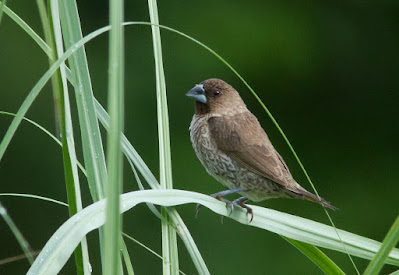 As we turned the road at Palo Alto West, some Crested Mynas were on top of a electric post. 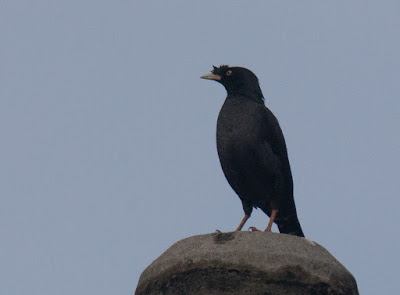 At Cancun Road, three Collared Kingfishers were perched quite low and in really bad light. 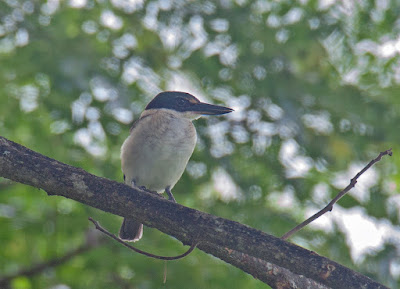 Paddyfield Pipits were fewer than the last we were here. We were lucky to find one at the usual place along Almansor Road. 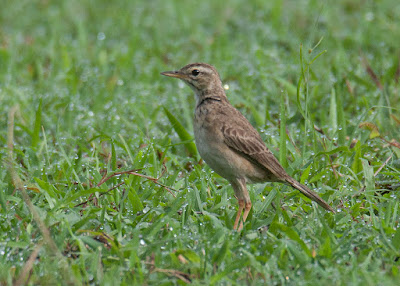 Not far from it were Pied Bush Chats - both male and female. 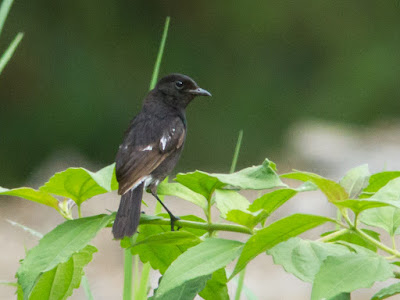 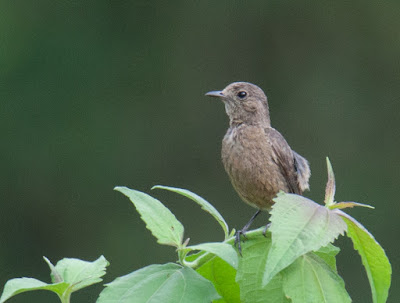 Strangely, the Spotted Doves were skittish. I managed to get a shot at one just before it flew off. 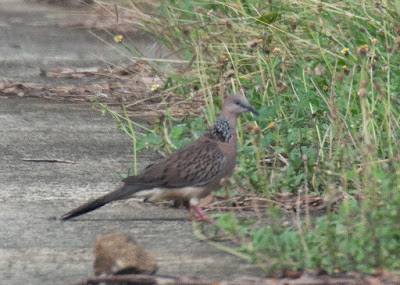 On the other hand White-throated Kingfishers were common. We've seen them in four different areas. This one was at Alicante Road. 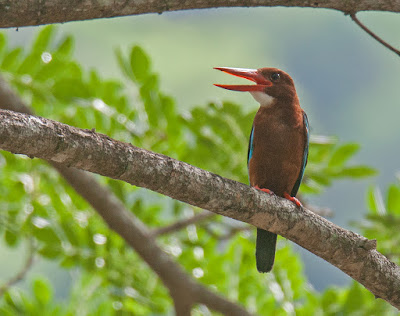 After taking shots at the Kingfisher, we heard the loud pok-pok-pok of a Coppersmith Barbet. We found it calling from a high perch. 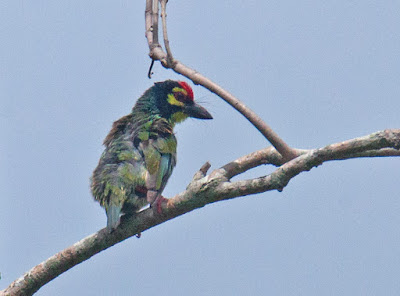 Near our car I was surprised to see a Zebra Dove so close that I got an almost full frame shot. 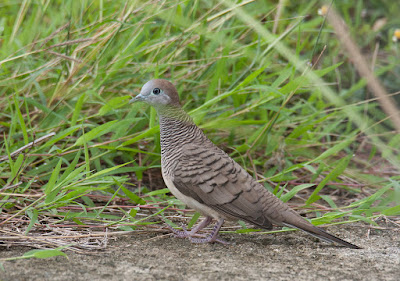 We noticed some movement at an aratiles tree. After much patience waiting for it to show up we got another surprise seeing a female Bicolored Flowerpecker! 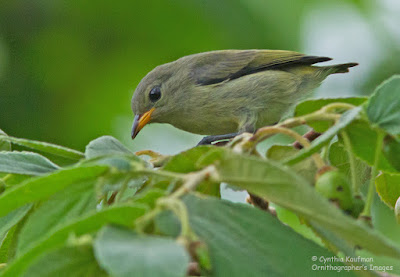 Cynthia then suggested we go to Frontrera Road where we saw a Long-tailed Shrike the last time we were here. I stopped at the place where it hangs out. "It's not there", my wife sighed. "It's there!" I pointed to her our quarry roosting a bit higher than where it used to stay. 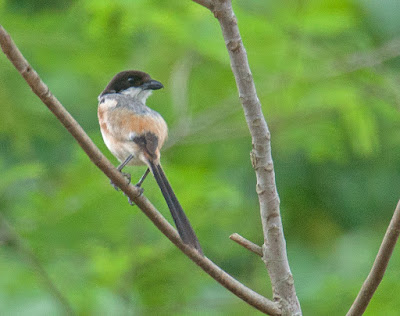 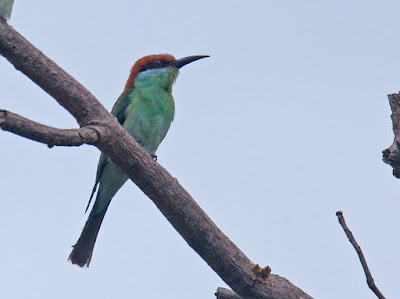 Another species we haven't seen lately was the Whiskered Treeswift. It used to be that we always see them on a wire along Palo Alto East near the roundabout. As we continued on back towards Cancun, guess what we saw! 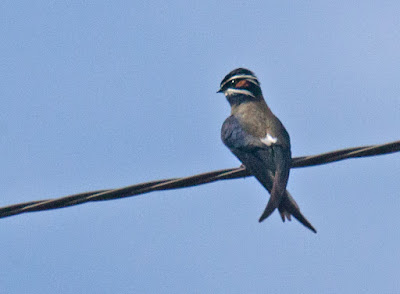 We were so happy that the birds we were hoping to see would suddenly appear before us. Hoping our luck would continue, we both said that we also haven't seen White-breasted Woodswallows for quite a while. We were already driving along Escano Road on our way out when we saw Woodswallows flying over. We watched and then saw them land on a bare tree! Photo ops! 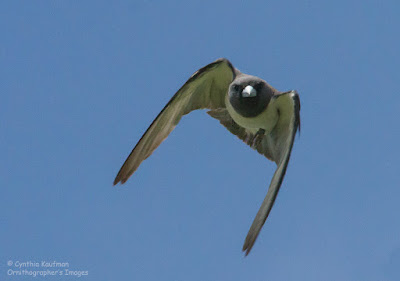 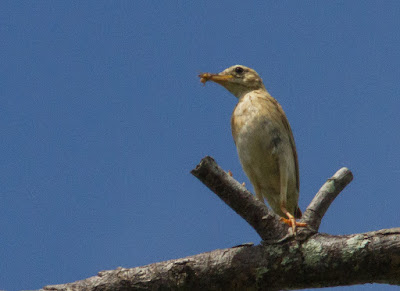 And that was how our birding day ended at Palo Alto, Baras. We just said the word and the bird we mentioned would show up! It was such a blessing!

Posted by Bob Kaufman at 2:30 PM No comments: