Too Little, Too Late

Recent postings in Facebook of some beautiful birds taken in Infanta by our friends made us consider going there to try our luck. Again, because I was told that there are several checkpoints on the way, I was a bit concerned that we may not be allowed to go through, being senior citizens. Then Cynthia wisely said, we wouldn't know unless we tried.

Saturday we were set to go. To my shock, our car wouldn't start! I did a quick prayer and tapped on the battery terminal. Thank God the car started and never gave us any trouble afterwards. At the first checkpoint in Tanay, the soldiers were very strict. The vehicle ahead of us was asked to turn around. When it was our turn, the soldier asked where we are going. I replied (in English) that we plan to go birdwatching along the road in Real going to Infanta. To our surprise, he smiled and let us go through.

As we reached our destination, our first stop was at Francis' house. Unfortunately he was at work. His wife was so nice and even pointed a Pacific Swallow perched just below their roof. 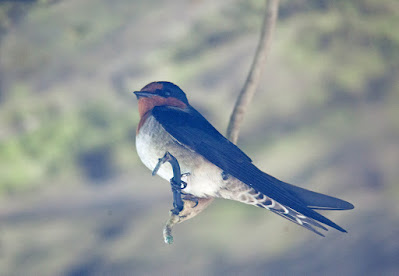 We thanked her and we moved on. Surprisingly, there weren't birds by the roadside probably because the hagimit trees were no longer in fruit. We proceeded to the area behind the chapel. There we met a group of bird photographers led by Mark Ghee. They told us that they saw an Amethyst Brown Dove and Philippine Fairy Bluebirds. As we waited for these birds to reappear, one of the guys pointed at a tiny bird moving around. We took some photos of the very active Buzzing Flowerpecker. 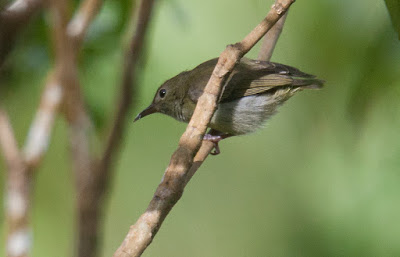 Without any more birds seen or heard the group decided to leave. Cynthia and I stayed behind hoping that some bird, any bird, would appear. Then came a flash of yellow-orange. "Scarlet Minivet!" I excitedly told my wife. This was the first time we've seen this species here in the Philippines! 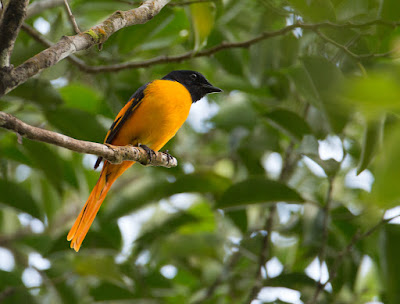 Happy that we got good shots of this colorful species, we climbed back to where our car was parked. At an open space we saw a couple of Large-billed Crows at a distance roosting on a pine tree. I got a shot at one of them. 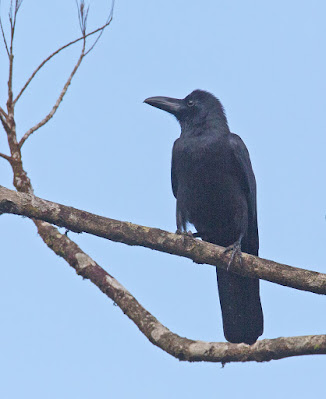 That open space was where we used to see a Paddyfield Pipit. However, we didn't see any this time. As  we exited that place, by the roadside, we saw two Paddyfield Pipits! 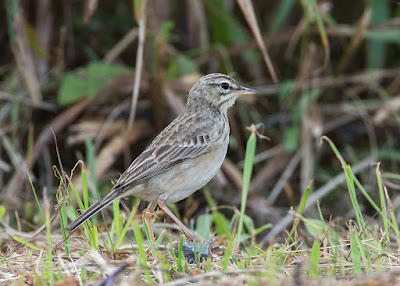 It was almost 11 am and as we were about to leave, we made a short stop at Gina's Garden. There Cynthia was able to get a shot at a Philippine Fairy Bluebird. 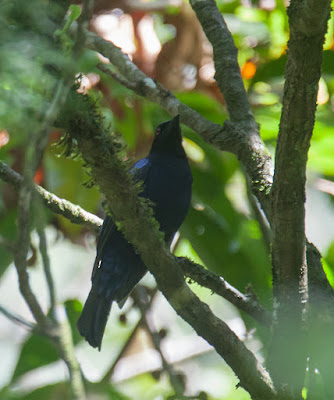 It was quite disheartening that in more than 3 hours of birding we only were able to photograph six bird species! We were too late because the usual trees that attract the birds were no longer fruiting.

Posted by Bob Kaufman at 8:43 AM No comments: