Such an event happened on Saturday, September 20th. Fall migration has begun. And when fall begins, the place to be is the row of Tamarisk and Eucalyptus trees along Laguna Road in Camarillo - known to birders everywhere as Laguna Tams. That small grove of trees is what is referred to in the birding world as a migrant trap. At the height of the autumnal southward flight of migrating birds, the Tams have been known to harbor some uncommon warblers and vireos.
Perhaps it was still too early in the season. Or maybe this was really not a good year for birding. Because in the two hours that we spent at the Tams, our search for the rare warblers yielded only one Orange-crowned Warbler, and one Townsends. And yes, there were some Song Sparrows and Common Yellowthroats by the creek, but these are species that are common everywhere. Thankfully there were also a few Warbling Vireos.

Frustrated, we tried the bridge along Wood Road where a Solitary Sandpiper was seen about two weeks ago. There was a sandpiper there alright. And it was by itself (meaning it was solitary..ha ha) but it was a Spotted Sandpiper.

"Where do you want to go now?" my wife asked seeing the dark clouds of frustration beginning to cover my face.

"Let's go to Playa del Rey", I answered. "At least we won't strike out because there will always be Oystercatchers and Surfbirds there."

As we hit the Pacific Coast Highway (PCH) there were some areas where cars can be parked and people can look at the Pacific Ocean a few feet below. At one of these vista points, we saw some gulls basking in the sun. As soon as I pulled over, Cynthia jumped out and started scanning the rocks by the ocean's edge. I followed her bringing just my binoculars as we weren't expecting anything unusual here, except for the gulls.

"There's a bird walking on top of the rocks over there", my wife said pointing to a pile of gray boulders. I caught a glimpse of some movement and focusing my binos on the moving object, my heart leapt and my jaw dropped.

"Darling, it's a Wandering Tattler!" I exclaimed. "Don't let it out of your sight," I instructed Cynthia as I sprinted to the Jeep to get our cameras.

One of the reasons I suggested going to Playa del Rey was that I was hoping that we would see the Tattler there, even though there were no reports of it being seen at that place lately. And so for the next thirty minutes or so, we enjoyed our serendipitous encounter with our 78th lifer of the year! 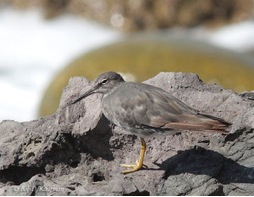 I even got a video:

So elated were we that we decided to cancel the trip to Playa and just rest on our laurels the rest of the day.
Posted by Bob Kaufman at 9:23 PM 3 comments:

Here and There Birding

My bad luck seemed to continue as I consistently dipped on my target birds the past couple of days. Fall migration is in full swing and there were a few reports on migrating warblers passing through the San Gabriel Valley area.

When I went to Eaton Canyon last Monday morning, my expectations were really not that high. So I just challenged myself to take a picture of every species I saw. After a couple of hours, I saw about 16 species and had photographed 13 - 3 of which are not good enough for my standards. Among the better shots are: A young Anna's Hummingbird whose head seemed like it was dipped in grape jelly... 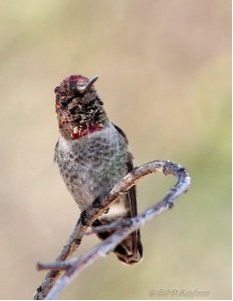 Tuesday morning I headed to Legg Lake. At the area where we found the Bay-breasted Warbler last year, various kinds of warblers, including a rare Lucy's, were reportedly seen. Of course when I got there, there wasn't a single bird at all. Not one! To console myself from such disappointment, I wandered around the lake and even visited nearby Whittier Narrows, hoping for some sort of redemption. Thankfully, there was. At a tiny puddle of water in Whittier Narrows, an Anna's Hummingbird, unable to stand the sweltering heat, decided to take a bath. 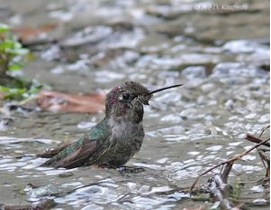 Soon it was followed by an Orange-crowned Warbler, finally showing why it was given such a name. 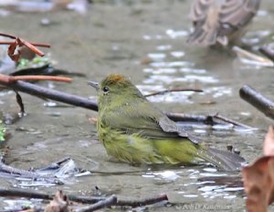 I returned to Legg Lake shortly after that, where I encountered a group of birders staring at a young Red-tailed Hawk, uncharacteristically perched low on a high tension wire tower. 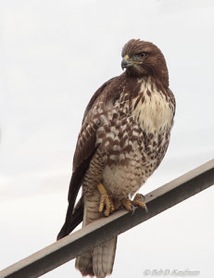 I joined the group for a few minutes as they searched vainly for the warblers as well. I even managed to show them a young Bullock's Oriole who tiptoed to look at the bunch of gawking people below. 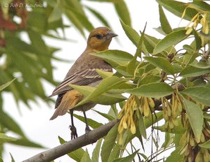 The heat of the day and the disappointment of not seeing some unusual warblers were both getting to be quite unbearable, so at 10:30 am I called it quits.
Posted by Bob Kaufman at 9:20 PM No comments:

I returned to San Joaquin Wildlife Sanctuary last Tuesday, Sept. 9th, to hopefully find and photograph the Solitary Sandpiper. Luck was not with me as once again I dipped on that bird. It never showed up in the whole 5 hours I was there!

Fortunately, another uncommon species, the Pectoral Sandpiper, has been the epitome of avian cooperation. The moment I arrived at the eastern end of Pond C, this lovely bird showed up and proceeded to hunt for food about 25 feet away from me. 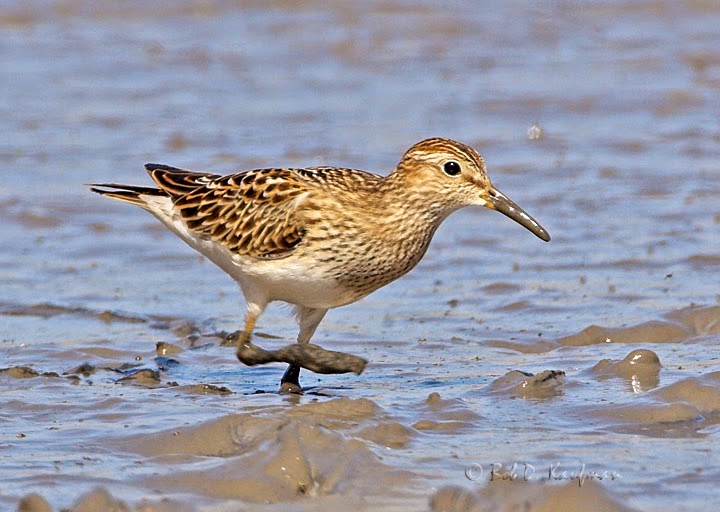 When I have had my fill of the Pectoral, I continued to scan the pond with the hope that the Solitary would somehow pop up. Through this endeavor, I was to have good looks at the other feathered occupants of the pond. Of particular interest was the strange fishing habit of a Black-crowned Night Heron. Normally, a heron would stand almost motionless by the banks of a pond or river and wait patiently for a tiny fish to swim close. It would then suddenly strike with its long beak to grab the unfortunate victim. This particular one however, swims or rather floats, on the pond and watches for an approaching fish. Then it would jump off the water, and then dive for the fish, much like how the pelicans would catch their prey.

On the last day of the three-day weekend, we finally got to go birding. We originally intended to go to Morongo Valley but the 120 mile drive in hot weather with no guarantee of a lifer made me cancel that plan. Instead we went to San Joaquin Wildlife Sanctuary (SJWS) in Irvine which was half the distance to Morongo, and where there was the possibility of seeing a Solitary Sandpiper. Which, of course, would be a lifer for us.

Whenever we leave the house early (before 7 am) to go birding, we almost always make it a point to stop by a McDonalds for breakfast. This has become more or less a ritual for us. After being misled by our GPS which directed us to a non-existent McDs at Michelson St (which was about a couple of blocks from SJWS), we finally found another one about two miles away.

After breakfast we decided to visit the San Diego Creek behind the Irvine Civic Center where a Solitary Sandpiper has also been found. The place was quite birdy: a Great Blue Heron, both kinds of Egrets (Snowy and Great) and a White-faced Ibis were there. But no Solitary Sandpiper. Interestingly, there were Lesser Yellowlegs and Spotted Sandpipers in the creek. If by some miracle these two species would mate, the result would look exactly like a Solitary Sandpiper - yellow legs, dark brown back and a disposition for bobbing.

At around 8:30 we proceeded to SJWS where the ponds yielded nothing unusual. Generally, sandpipers are tiny shorebirds that look alike particularly in their non-breeding plumage - as they were this time of year. So much so that they are collectively known as "peeps". In hopes of locating our sought after Solitary Sandpiper, I had to scan flocks of these constantly moving birds and try to look at each one to detect the telltale sign that would differentiate the Solitary from the Westerns and the Leasts.

A handful of birders came and went, each one asking the question of the day: "Did you see the Solitary Sandpiper?" And each time the reply was in the negative. At least some of us were lucky enough to see the Sora Rail, a very secretive and skulking bird, come out in the open. At around half past eleven our hopes of ever seeing our target bird were dwindling fast.

Just as we were about to leave, there was a bird that joined the group of barn swallows hawking for insects above Pond C. It was behaving like a swallow but it was almost twice as big. A tern! But unlike the usual terns that sometimes visit SJWS, this one had dark wings and a dark underside. I know I've seen this kind before....until it finally dawned on me..this was a Black Tern! Certainly unusual in this part of California. Soon other birders were alerted to its presence. 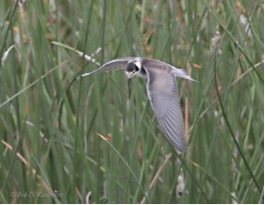 Of course, Cynthia always has a better shot. Did I mention that she is real good at photographing BIFs (Birds in Flight)? 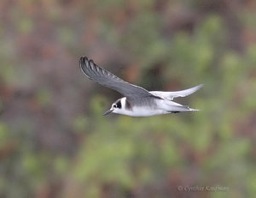 The Black Tern, though not a lifer, certainly made up for the disappointment of not seeing the Solitary Sandpiper. Not just for us, but for the other birders as well.

Posted by Bob Kaufman at 1:06 AM No comments: