My cellphone beeped. It was Friday evening. The text message was short: "We're good to go". In my mind I debated whether to bring my long lens and tripod or my walk-about 100-400 zoom. I chose the latter. I didn't sleep well that night - excited that I will be going birding with my buddies. Our destination: Mt. Palay-palay in Cavite.

3:30 am and I was wide awake. I got dressed, prepared my gear and waited. About an hour later I heard a van approaching. It stopped in front of our gate and out jumped fellow birder-photographer Bert Madrigal. After the warm greetings I bade goodbye to my wife, who opted to stay behind. Already inside the van were two more friends, Neon Rosell and Alain del Pascua. And then we were off.

Mt. Palay-palay is not that far from Manila and is a favorite among bird-watchers (and bird photographers) because of its diverse avian population. Dawn had already broken as we slowly drove up the mountain road. Bert stopped the van by the roadside to buy some foodstuff. We took this opportunity to assemble our gears. "Elegant Tit!", Neon announced. My ears perked. "Where?", I asked. "I can hear it", he said. Then, "there, on that tree!" I looked. I saw. I was happy. I got a lifer! 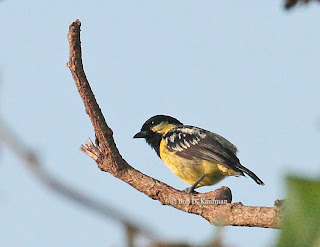 We moved on. "Coucal!" It was Neon again. Bert slammed on the brakes, reversed and stopped. We all crept towards the Philippine Coucal perched on a dead branch just off the road. However, the large bird can only be photographed from one vantage point. A small patch surrounded by grass as tall as us bordered by a deep ravine. We took turns taking pictures of the coucal until our shoes and our pants from the knees down were soaked from the morning dew. 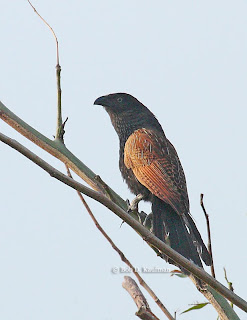 Further up the road as we rounded a turn we came upon a tree where about half a dozen Glossy Starlings were perched near the tree top. Below was a pair of Whiskered Treeswifts hawking for insects. But they were too far off to be photographed so we just moved on.

It wasn't long before Neon again shouted, "Coucal!" This time Bert slowly eased the van to a quiet stop. As we stepped out of the van our eyes and cameras were treated to a display of an insouciant bird basking in the morning sun. This time we had our fill. 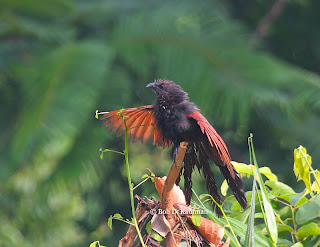 We continued up the mountain road. Another turn and Bert once again braked suddenly. A Crested Serpent Eagle was perched at eye level! Being the one closest to the raptor I was able to fire off a couple of shots before it flew away. And before Bert, Neon and Alain could even lift up their cameras. That was my 2nd lifer! 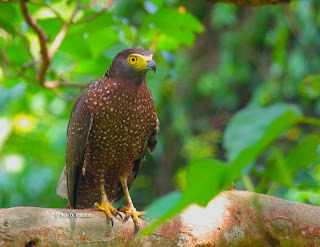 By midmorning the birds became a bit sparse. Except for a few Brahminy Kites soaring overhead and some Philippine Falconets and White-breasted Wood Swallows perched on electrical wires. At the end of the road and the entrance to the pricey Caylabne Resort, we were all startled to see a white-morph coucal fly across the street. We spent almost an hour stalking the uncommon coucal and failing miserably. We tried imitating its call to lure it out. That didn't work. We surrounded the area where we saw it land and tried to flush it. That didn't work either. We finally gave up.

On the return trip we once again stopped at the place where we saw the starlings and the treeswifts before. To our delight, the treeswifts (at least one of them) was now perched closer to the road. All four us pointed our cameras at the lovely bird and were shooting to our hearts content. Then it rained. We barely made it inside the van when a torrential downpour was dumped from the skies. 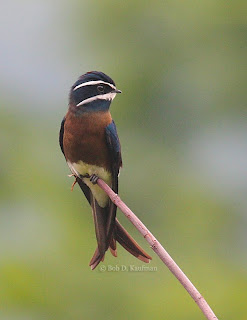 
For other birding blogs and photos please visit:

I must bird! I need to go birding! Otherwise I'll go crazy!

It has been almost a month that my left knee has been bound in a brace. This was to help heal the tear in my meniscus. That brace came off last week and slowly I flexed my left knee to see if the pain was gone. It was. But paranoia had crept in. For good reason if I may say so. For a while early in June I thought my knee was ok since I no longer grimace whenever I walk. So I went birding and walked a lot all the while carrying my hefty gear. Which resulted in the said tear in my knee cartilege.

When the brace came off last week I walked as if my knee was still bound by metal rods. One day later, Gathering all my bravado, I tried walking. No pain! Then I tried driving our car. No Pain! A Saturday filled with social appointments and a Sunday devoted to church confirmed that I am now able to walk, albeit slowly, and drive thru the chaos known as Manila traffic.

Monday and my wife knew I have to go birding. We chose a nature park not that far from where we live. It was already late when we got there (we woke up a little bit later than usual) so we were not keeping our hopes that high. At the lake we got lucky as a White-breasted Waterhen showed up briefly. Minutes passed as we stood sweltering in the mid-morning sun. All we were seeing were the ubiquituous Eurasian Tree Sparrows. Then something brownish flew into the reed-like plants across from where we were standing. Yellow Bittern! It is a common bird but difficult to observe because of its skulking habit, as most bitterns are wont to do.
And then it skulked. 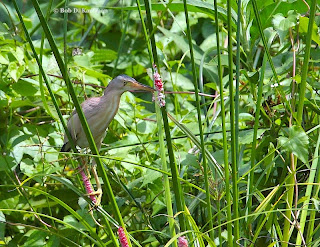 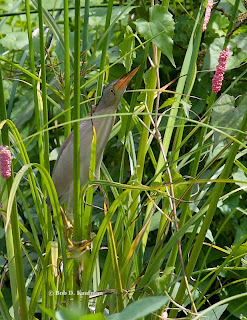 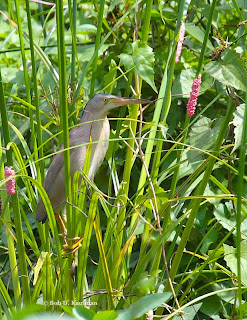 By now my shirt has already been drenched by the copious sweat that seemed to flow from every pore of my skin. Cynthia asked if my birding itch had been satisfied. I confirmed that it was. That bittern was just the medicine I needed I told her.


For other (less kneedful?) birding blogs and photos, please visit: