A River Runs Through

The Santa Clara River is the largest river system in southern California and is only one of two in the region that remain in their natural state and not channelized by concrete. It lies close to the boundaries of the cities of Ventura and Oxnard, some 100-odd miles north of Los Angeles.

The thought of seeing a river in its “natural state” - so different from the urbanized concrete jungle of greater Los Angeles, spurred us to investigate this waterway and try to discover what feathered creatures it harbors.  What made this trip more inviting was its proximity to McGrath beach – a strip of sand and sand dunes not frequented by the heliotropes of southern California. With the weather as hot as it was, a stroll on an uncrowded seashore would be a welcome respite.

And so we went early on a gloomy, overcast Saturday morning (what happened to the so-called heat wave?). The instructions we got from a birding site in the internet suggested that we park at the foot of the bridge which traverses this river and hike/bird from there. We found a good parking spot when we got there and were about to hit the trail when I noticed some debris which appeared to be the living quarters of some homeless person. Common sense dictated that we abandon plans of using this path so we proceeded to go the beach campground just a few yards away from the other side of the bridge, where we had to shell out $8.00 for the entrance fee. There was a trail right next to the parking area that led to the river, or as we soon discovered, the river bed. The natural river turned to be a small creek and a lot of mud. The river bed itself was huge, probably a quarter or even a half- mile wide. In spring when the snows melt from the mountains and the resulting waters rush toward the ocean, this river, I imagine, would be a real beauty. For now we had to contend with patches of water here and there. But there were birds, lots of them, and majority of them hidden in the bushes and trees by the riverbank. Another nemesis of mine, the Common Yellowthroat, were aplenty but so secretive and so active that getting even one good shot was an exercise in futility. The only bird that showed itself was the Black Phoebe. One of these days I'd probably write an ode to this black-and-white flycatcher. We go up the mountains, it is there, in a park full of people, it is there. In a desert or by a waterfalls, you'll find it there.

Anyway, frustration was beginning to get to me (skies are grey and I'm feeling blue), when suddenly a couple of killdeers flew by. Now that's another misnomer if ever there was one. These are birds about the size of a small chicken with big, beautiful eyes and certainly not capable of killing a deer. A shrimp maybe, but not a deer. I started stalking them, crouching in mud while Cynthia was chatting with a local hiker (Turns out she was getting directions for a birding place in the mountains not that far from where we were, either that or she was just getting an alibi for not traipsing in the mud with me).

With the killdeers eventually flying away, we started our hike toward the ocean where we could see a lot of birds congregating on the sand dunes. Along the way we passed by a group of tall reeds and a flock of Bushtits in a feeding frenzy. Bushtits are tiny (just a little bigger than my thumb), active, brown birds. They travel in small flocks moving from one reed stalk to another, constantly flitting, gleaning tiny insects from the plants. Knowing this habit, I positioned myself to a spot where I knew they would pass and hoped against hope that I would get at least one good shot of a bushtit. And I did. 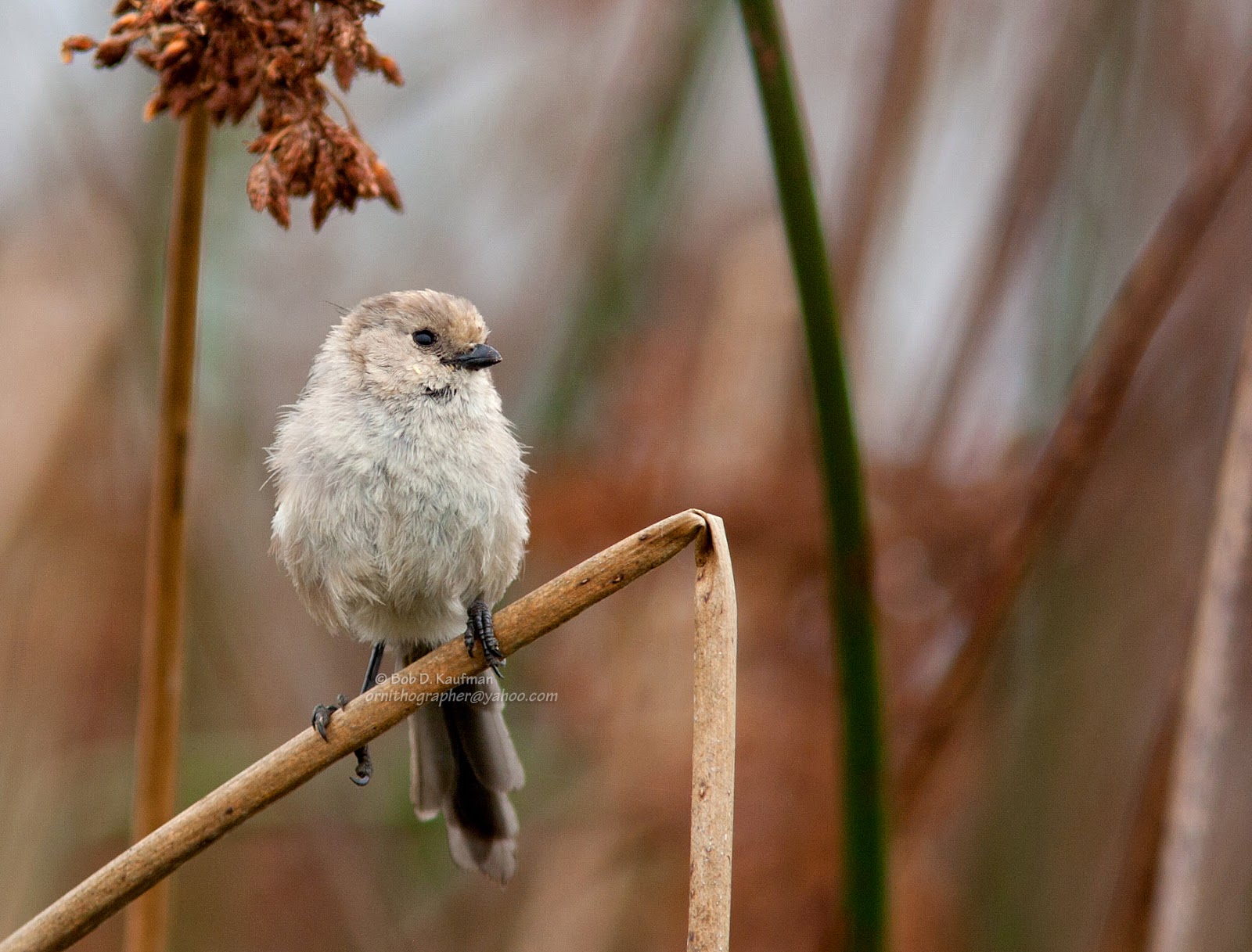 We moved on, crossing piles of dead reeds, side-stepping stinky pools of seawater. Eventually we reached the sandy shore and there they were - throngs of seabirds, mostly pelicans and gulls with a smattering of peeps. Cynthia then exclaimed, "Look at the color of that killdeer!" I looked and saw a bright orange- colored bird with a large black "necklace". (Looking at our field guide later, we found out that it was a Ruddy Turnstone, a lifer for us).

We spent some time at the beach enjoying the birds around us. After a while, we felt a little cold (the skies were still overcast) and the wind was a bit gusty (the waves were high enough for surfers to have a field day). As we turned to go back to the parking lot, we came across a fenced-in area where snowy plovers were supposed to be nesting. We looked and looked, straining our necks but we couldn't find a single one, not even a nest or an egg.  Disappointed, we continued on. On a small dune were several brownish birds that we discovered to be the vey common House Finches. But then among them were about three birds that were larger and did not have the telltale reddish tinge of the finches. Using my binoculars, my heart leapt when I recognized the black bib and crown of Horned Larks! Having seen these birds only once before in Lake Isabella at the other side of the state, I was pleasantly surprised to see them here. 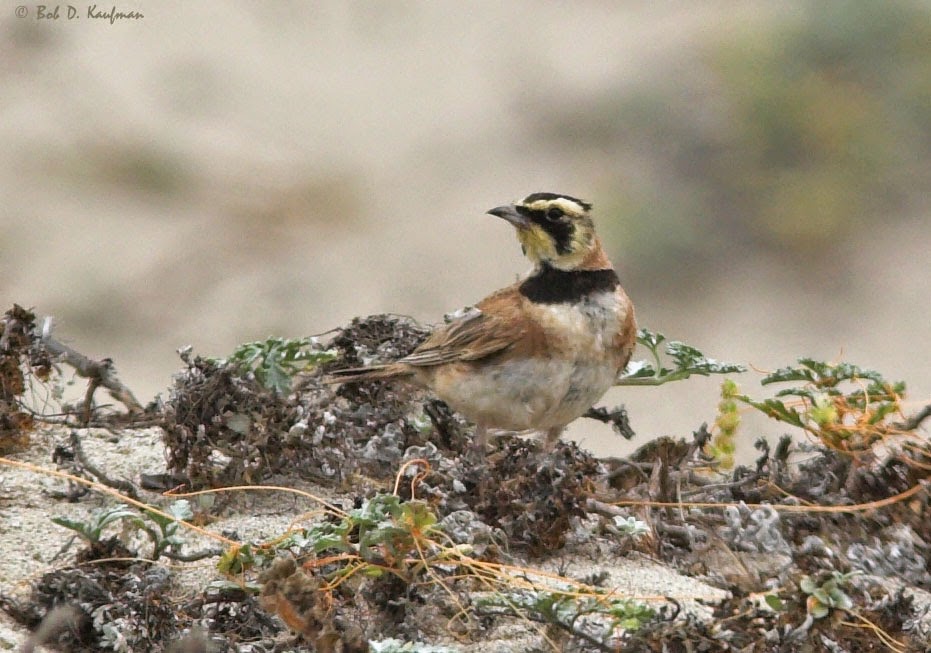 Happy with the fortune we had with the Horned Larks, we moved on to another spot in Camarillo, where there was only a parking space and then some expanse of grassy land before it becomes the Pacific Ocean. The parking lot and this expanse of land was separated by a very shallow creek with steep banks. We crossed the only bridge that spans this creek in the hope of getting close enough to photograph the pelicans and other birds in a sandbar about a hundred yards from where we were. But we have only walked a few steps when all, and I mean all, the birds in the area flew away from us. Hmmm, my deodorant must have worn off already. As we were returning back to the car, I noticed two birds fly in to the creek. I hurriedly went after them and was rewarded by the sight of two Greater Yellowlegs feeding in the shallow waters. 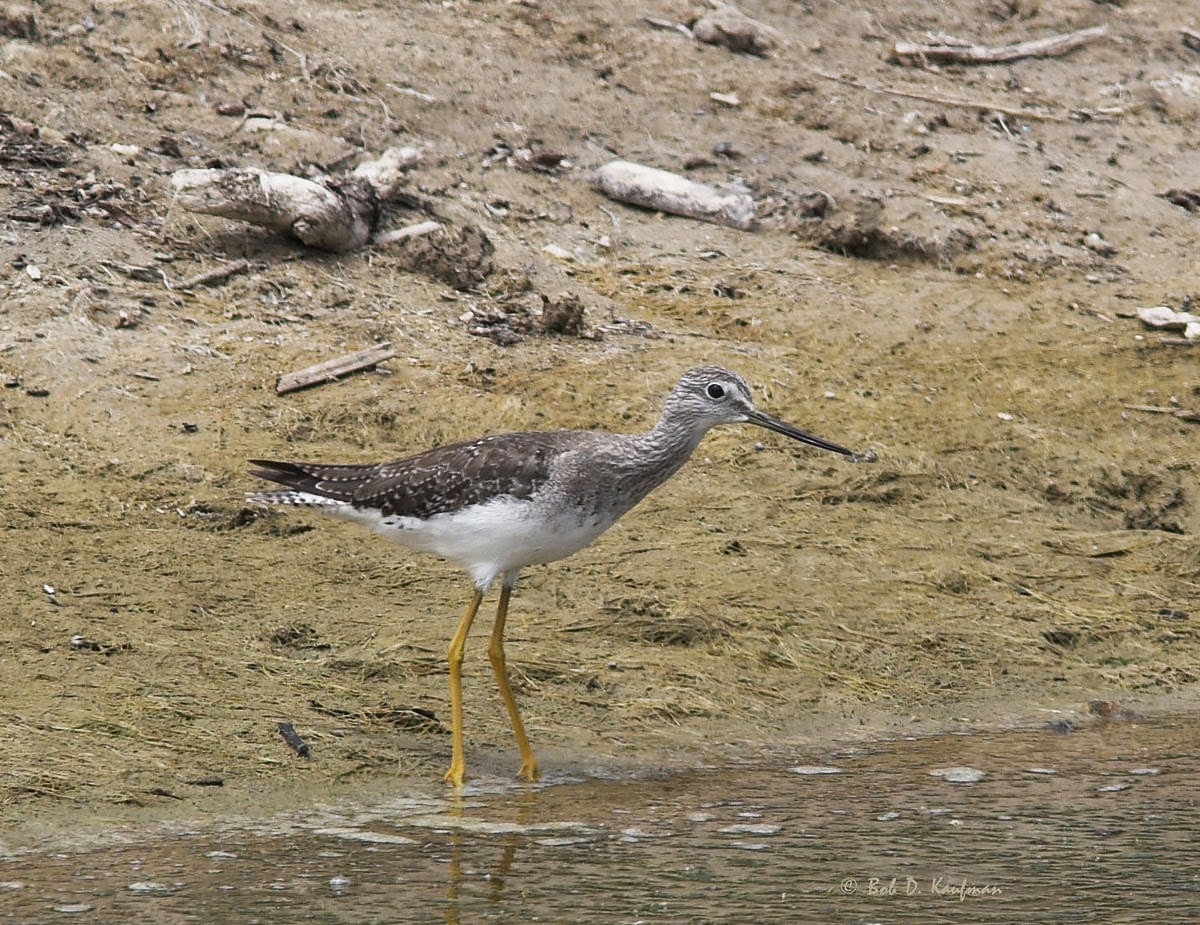 From there we went to the mountain place that Cynthia culled out from the hiker she talked with at Santa Clara river. The place turned out to be a dud, bird-wise, probably because it was getting really hot (this was about noon, and the cloudy skies finally gave way to blistering sunlight) or maybe because we didn't venture far enough (a hiker was actually lost at that time according to the forest ranger that we met). I did have a glimpse of our target bird, the White-tailed Kite, but it was too far away for a decent shot.
As we left, we resolved to return to Santa Clara in spring of next year when the river will be at its fullest, and we hope so will the birding activities.
P.S. Regretfully, we were not able to return to the Santa Clara River after this so we never found out if it actually became a river or remained as a creek.
Posted by Bob Kaufman at 5:09 PM