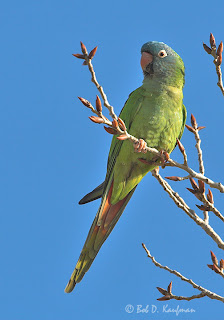 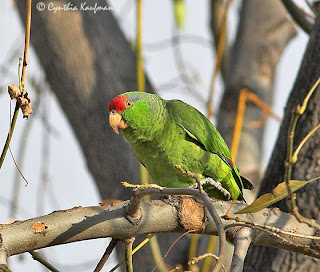 We purposed to chase parrots today. San Gabriel Valley in southern California has been known to harbor several species of parrots. The original birds were allegedly escapees from a pet store fire in Los Angeles several decades ago. They have since proliferated and have expanded their territories where in some areas they are even considered nuisances (all those screeching!).

We cruised down Golden West Avenue in Temple City and soon enough Cynthia's super ears heard the unmistakable raucous cries of our quarry. Not long afterwards she saw a pair flying down the street and I almost recklessly followed them. But we lost them anyway. We then proceeded to the other places nearby where parrot sightings have been reported. To no avail. Cynthia suggested that we go back to where we first saw the birds. Trusting her intuition, I readily agreed. As we approached Daines Street, Cynthia saw them again. This time two Red-crowned Parrots landed on a tree near the street. I hastily parked the jeep across from the tree and Cynthia, as always, had already jumped out and started shooting while I assembled my gear. Surprisingly, the parrots remained and probably were just as curious at two human beings aiming white things at them as we were at the two bright green colored avian creatures in front of us. Soon a mischievous crow harrassed our parrots and giving an indignant squawk, they flew away.

Flushed with our success (our day was already made) I decided to visit Peck Road Water Treatment Plant (aka Peck Pit) instead of the original plan to go to Santa Fe Dam, and save $7 in entrance fees in doing so. The first bird I saw at Peck Pit was an Osprey perched on a tall (a very tall) tree above the eastern side of the lake. Meanwhile, Cynthia was so enthralled by the bright patch of red on the head of a Ruby-crowned Kinglet. Note that this red patch is very difficult to observe - we have seen hundreds of Kinglets before and this is the first time Cynthia saw the "ruby-crown" for which the bird was named. And so while my wife was trying to get a photo of the active little kinglet, I snuck over to edge of the lake to try my luck at the Osprey. Suffice it to say that we both failed miserably at our endeavors.

As we meandered among the picnic tables, we spotted a flock of Western Meadowlarks feeding nonchalantly among the grass. We got our shots and that buoyed up our spirits once again. Just then, Cynthia's super ears once again picked up some squawking overhead. "Parrots!" she yelled pointing up. "Parakeets!" I corrected her and referred to the long tails for confirmation. Our hearts began to sink as both parakeets flew past. Then as if following a divine order, they wheeled around and perched on a leafless tree right in front of us! There they preened and posed as we took their pictures to our hearts content. And when they concluded that they have done their job, off they went to their intended destination. Later on at home, I found out that we just saw a pair of Blue-crowned Parakeets - a lifer for both of us.

Everything was anticlimactic after our encounter with the parakeets although we also got some good shots of Lark Sparrows, White-crowned Sparrows and Ring-necked Ducks.

To top what we already considered a perfect day, we bought our dim sum lunch at the nearby San Gabriel Superstore. Enough food to feed 3 people (that is two people with an appetite of three) and it only cost us $10.75!