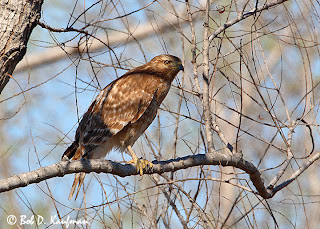 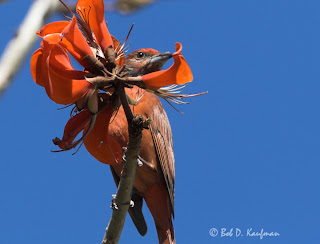 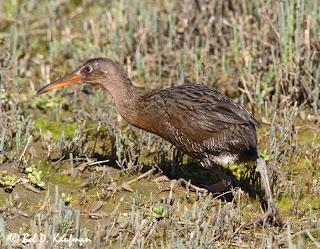 We were cruising down the 5 Freeway. Songs of praise and worship softly playing from the car stereo. Both of us unusually quiet. Unbeknownst to each other, we were thinking the same thoughts: Given our recent spate of bad luck, is it worth driving the 120-odd miles to San Diego to see a species of tanager that is seldom seen in these parts of California? But we are birders and birders are made of sterner stuff. We take our disappointments lightly and our victories jubilantly. We persevere, taking no-shows with a grain of salt and then moving on.

We arrived at Imperial Beach around 9 am and not seeing any McDonalds to uphold our tradition, we settled for Jack in the Box instead. There we partook breakfast noting that the other clientele were a group of elderly Pinoys (must be retired U.S. Navy personnel, we presumed).

Hunger satisfied, we proceeded to the Tijuana River Estuary Visitor Center to inquire on the whereabouts of their local avian celebrity. The Park Ranger was apologetic, unable to give us the exact location of our quarry. We peered at every tree in the vicinity hoping to glimpse something red. Nothing. It’s still early, I told Cynthia, but more as a self-encouragement. It was true in a way though, as previous sightings were reported anywhere between 10:30 am and 1 pm.

We decided to go to the Bird and Butterfly Garden not too far away. Along the way, Cynthia suddenly pointed to a dark thing in a tree. “Hawk!” she shouted. I screeched to a halt, grabbed my binoculars and saw not one but two Red-shouldered Hawks. Hastily, I assembled my camera and quietly inched closer. Despite my stealth, one of the birds (of course, it had to be the male, which is much colorful) flew off. Thankfully, I was able to get a pretty decent shot of the remaining hawk.

The garden itself was frustratingly quiet, except for some cooperative Juncos. At least I was able to take a picture of one that is not on the ground. Juncos are seed-eaters and spend the majority of their lives feeding on grassfields. That morning we saw more kinds of butterflies than we did of birds. Instead of sparrows we saw sparrow-parrow, ha-ha. And this despite my attempts at “pishing”. I just finished reading a book called “The Art of Pishing”. Pishing is the alliterative term of getting the attention of wild birds by making sounds from the lips as in “pssh”. Done right (right being the operative word) it is supposed to guarantee that birds of various species would show up upon hearing these strange sibilations. I guess I need to practice more.

Not getting anywhere, bird-wise, we thought we’d give the tanager another chance. Just as we parked, we saw this birding couple (the binoculars were a give-away) with smiles on their faces. We asked the customary, “Have you seen it?” question. We got an enthusiastic “yes!”

“It was in a tree with red flowers, between the apartment complex and the ballfield” we were told.

In a flash, we were at the prescribed site. We saw a group of birders but they were all looking at a different direction. I fixed my gaze on the tree with red flowers (which was behind the birders) and soon enough I saw it. I trained my long lens on the bird and all of a sudden the other birders stampeded to where we were. The long drive was worth it after all as we added Hepatic Tanager to our life lists.

Flushed with our success and it being past noon, we went native and had lunch at Margie’s Karihan just a few miles away. We have eaten here before but we have forgotten how generous the servings were! The Lechon Kawali and fried Tilapia being taken cared of, we went on one last sortie into the Estuary itself. The wind was picking up a bit but we still saw some birds: Says’ Phoebe, a smattering of Sparrows (House, White-crowned and Savannah), Whimbrels preparing to take a nap, a Killdeer already napping, Willets twittering among themselves. As I was meandering along the creek, Cynthia yelled, “Clapper Rail!” I turned just in time to catch a glimpse of the ruddy colored marsh bird skulking among the reeds. I stalked the rail as it weaved in and out of the tall grass. Everytime it disappears from view, Cynthia would clap loudly to coax it to show itself for a photo op. (It is, after all, a “clapper” rail). While we were waiting for the Clapper Rail to reappear, a man wearing nothing but a pair of boxer shorts, shoes and binoculars came by and talked animatedly about his various bird sightings in the area. Remember that it was quite windy and Cynthia and I were both clad in jackets. The weather and the man both getting more blustery, we concluded it was prudent to head back to the Jeep.

As we drove back home, we both realized that the spell has been broken, we got our lifer and even a bonus in the Clapper Rail – a bird not easily seen.

Cynthia missed her afternoon siesta, though.
Posted by Bob Kaufman at 8:33 AM