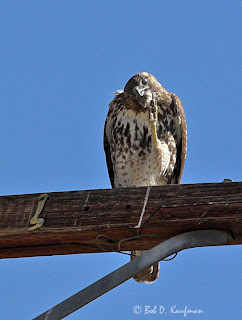 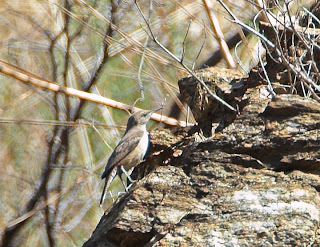 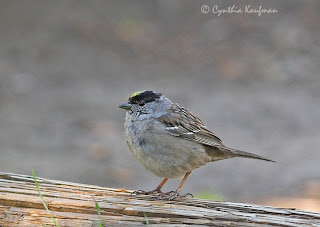 With gas prices ballooning lately to over $3 a gallon, we thought it wise to go birding to a place closer to home. Placerita canyon is such a place. Less than 30 miles away, it is a place we have not visited for quite sometime now. Placerita is a wooded canyon in the north side of the San Gabriel mountains in southern California.

After our Saturday morning ritual at MacDonalds (where else but in our own hometown of South Pasadena), we pessimistically drove north. Pessimistically because there was fog all over. Our fears thankfully went for naught because after a few miles the sun was already brightly shining.

There were already some volunteers sprucing up the area when we arrived. Just as soon as we parked, Cynthia was already calling out birds that were right in front us: “Juncos and House Sparrows!”

“You’re half right”, I said, “the sparrows are actually Golden-crowned”. Of course, she was already shooting away before I could even get my camera out of the Jeep. Then again the sparrows were used to people so I was able to squeeze in some shots of my own.

We moved on to the trails where we got some good looks at Acorn Woodpeckers and singing House Wrens. Further up the trail, Cynthia hushed me and said that she heard a different bird call, something she has not heard before. We stood still while Cynthia tried to locate the source of the strange new song. Soon she was yelling, “There it is! There it is!” all the while pointing to a small brown bird high up on the hillside. At first I thought it was some kind of a flycatcher a it hawked after some insect. But then…..

It has a long bill - so very unlike a flycatcher. Looking at it intently through my binoculars, going over images in my brain that will match the identity of the bird in my sights. Then it came to me. “Rock Wren!” I shouted triumphantly.

“Are you sure?, Cynthia asked trying to curb her enthusiasm since this is a rather uncommon bird. I have seen this species only once before, in Patagonia, Arizona a couple of years ago (she missed it).

“Without a doubt.” I assured her.

We both agreed that that was the highlight of the day. On our way back, we added Spotted Towhee, California Towhee and Nuttall’s Woodpecker (!) to our photo list.

As we were leaving something deep within me, call it gut feeling, prompted me to turn right from the park exit instead of turning left which would be the way back home. When I moved to the side of the road to let the truck behind me pass, I noticed a bird perched on top of the telephone pole. I quickly grabbed Cynthia’s camera (mine was already packed and stowed at the trunk) and started shooting the juvenile Red-tailed Hawk. Perhaps it was the clicking sound of the camera but the raptor took one look at me, sized up my personality and consequently gave me the “finger”. One of them juvenile delinquents, what can I say?
Posted by Bob Kaufman at 9:38 AM