Saturday was the Los Angeles Audubon Society's field trip to the Upper Newport Bay in Orange County. The reason for this is that the tide will be quite high that day which hopefully would drive the marsh birds closer to shore and ergo better viewings.

When my wife and I looked at the weather section of the Los Angeles Times that morning, we saw this: 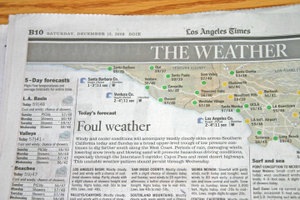 However, looking out our window, the skies didn't seem that dark. And we are birders, of course, where neither rain nor sleet can stop us from pursuing our hobby. (These are pep talk words, by the way, spoken to ourselves to dispel any lingering discouragement we might feel).

We met the group at the boardwalk. Nick and Mary Freeman, the group leaders, were already busy pointing out the Clapper Rails in the distance. They were the ones who showed us where to find the Varied Thrush at Galileo Hills a month ago. Then there was Barbara Johnson who showed us our first Black Oystercatchers and Surfbirds at Playa del Rey a few years back. And our birding buddy, Tom Starcic, was there, too. In the pay-it-forward scheme among birders, we were the ones to show Tom his first Spotted Owl at Placerita Canyon early this year.

We were all lined up along the boardwalk waiting for the tide to reach its peak when somebody yelled "Bittern, flying in!". Binoculars went up in unison while Cynthia and I raised our cameras and started firing away. After several passes in front of us, the Bittern settled in a dense brush. 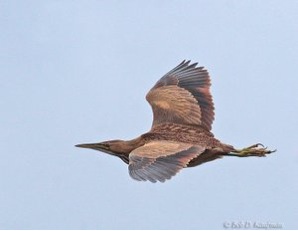 We continued to pass the time watching a Northern Harrier patrol the back bay. Suddenly Nick Freeman came rushing and announced that another American Bittern had landed not too far from the boardwalk. Like the crowd when the stores opened on a Black Friday morning, we all rushed to the point that Nick said the Bittern was. This was the first time that Cynthia and I have seen an American Bittern in full view. Who knew they have yellow legs! 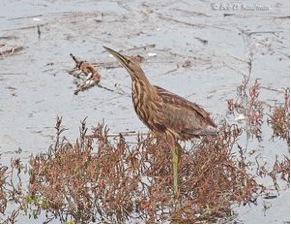 It started to drizzle a bit. Mary suggested that we all go to the back bay drive and see if we can get closer looks at the birds. Surprisingly, the sun shone just as we entered the one way street along the bay. Most of the birds - Marbled Godwits, Willets and Black Skimmers were sleeping and the ducks were still far off into the waters for any good photography. The only bird that piqued our interest was a young Common Moorhen foraging by the "falls". 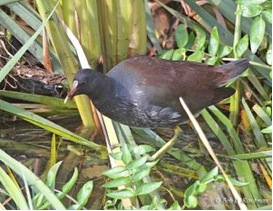 We said goodbye to our friends and made a stop at Bolsa Chica. However, the cold wind blowing incessantly kept most of the birds huddled far off shore, not even daring to fly in this harsh condition. Even the most intrepid birders know when it is time to quit. It was time to quit.

Nice picture of the bittern flying. You both visit excellent birding sites and have a lot of excellent adventures that you are sharing. Thanks for giving us a peek into your view finders.

Too bad it was that windy, at least you often get to go to great places!
Thank you for sharing!

Beautiful photographs. I love visiting to see what everyone is out seeing.

Great shot of that Bittern!

What a great bird to see so well.