I visited Legg Lake Monday to look for Canvasbacks. The only photo I had of this species was that of a female taken at Bolsa Chica several years ago. It wasn’t long before I found a group of them lounging at the third lake. Also in the area were a bunch of Ring-necked Ducks. Inasmuch as these species would be a lifer for my birding buddy, Tom Starcic, I asked him to meet up with me on Tuesday morning. That was also an excuse for me to bring my bigger lens. My images of the male Canvasback that I got on Monday with my 100-400mm zoom lens were not big enough for my taste.

I was already taking shots at the Canvasbacks when Tom arrived. We proceeded to the area where the Ring-neckeds hang out. Along the way we were startled by a pair of Northern Flickers which darted across from us and landed on a nearby pine tree giving us some nice photo ops. The Ring-necked Ducks, on the other hand, were all sleeping way out at the middle of the lake. We moved to a point that would bring us closer to them and patiently waited for some activity. Eventually a few Ring-neckeds awoke and started their morning ablutions. Tom and I had some nice views.

As we were rounding the lake, Tom would every now and then stop and point to a flock of parakeets whizzing overhead, screeching as they went.

When we reached the parking area, Tom stopped and stared at a sycamore tree.

“The parakeets are there.”, he said. 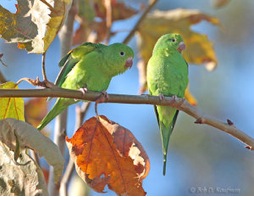 Silently, we approached the tree until we saw a pair of the Yellow-chevroneds. Tom was smiling as we reviewed our shots of the lovely exotics. He just got his second lifer of the day.


We then proceeded to north Rosemead – still a part of the Whittier Narrows Recreational Area – to look for the Pine Warbler reported seen last Monday. Although the place was quite birdy (lots of Yellow-rumped Warblers, House Finches, American Goldfinches, Western Bluebirds and Black Phoebes), the Pine Warbler was nowhere to be found. What we saw was a Plumbeous Vireo and Tom’s third lifer for the day.


Since it was still early – a little after 10 am – Tom suggested that we visit Bonelli Regional Park which is not too far from here. After enduring a terrible traffic jam at the Pomona Freeway, we arrived at Bonelli around 11 am. Our first stop was the area next to Restroom 8 where the Painted Redstart spends winter every year. Sure enough, it was in its favorite tree and was very cooperative in posing for us. 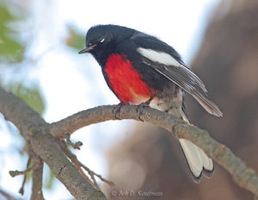 The lake itself was surprisingly devoid of a lot of birds. The Redheads I saw just a week ago were gone. Only a few Scaups and Western Grebes dotted the lake. At this point I was already tired from lugging my heavy gear so I just rested while Tom explored the lakeside trail. After a while, he called me saying that there’s an Osprey perched not too far from where I was resting. I hauled my camera and tripod and proceeded to where Tom said the Osprey was. There it was, unperturbed by the harassing of a pair of American Crows. 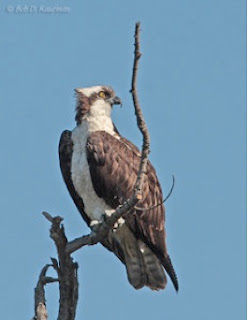 Soon Tom returned from his foray. We made several more stops along the lake but bird activity had pretty much slowed down. It was 1 pm and we both were getting hungry so we agreed to call it a day. It was a great birding day for both of us; Tom getting three lifers and me getting good shots at the male Canvasback and getting a good work out for my back. 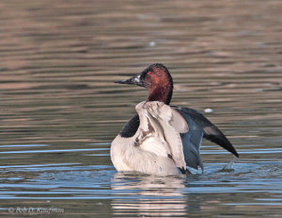 Nice job on getting your Canvasback shot and in an interesting behavioral pose. I am impressed with the parakeets. The photo is great and it must have been fun having the opportunity to watch them.

Great photos all around - I am really enjoying the blog and the photography.
Cheers!

Some great captures on a grand outing. It would be for me! I love the little redstart image.

WOW! Excelent photos!
I'm glad you managed to find it and take such a great shot.
Hugs from Peru,
Mel