My good friend, Tom Starcic suggested that I visit the lake at the Huntington Central Park (HCP) in Orange County if I wanted to add a couple of species to my year (and life) lists. The Red-throated Loon and the Tropical Kingbird can both be seen there, he said.

So, despite a pounding headache that would stay with me most of the day, I was at HCP bright and early on Wednesday morning. Finding the loon was a piece of cake. It was just sitting at the edge of the lake. 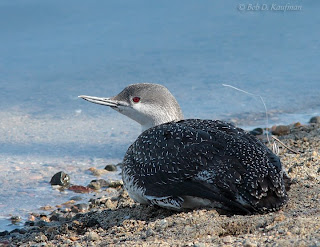 It didn't move even as I approached to about fifteen feet from where the bird was. I dared not come any closer as I had this uneasy feeling that something was wrong. The loon looked quite alert but another friend, Glenn Price, has posted a picture of this same bird in this same spot in basically the same position. That picture was taken last Sunday. If the bird hasn't moved in four days, something's got to be wrong. I fear for it's life since there were unleashed dogs occasionally running about. As a matter of fact, a little bit earlier I saw such a dog kill an unfortunate Coot who got tangled in the reeds. A lady birder, who I believe is associated with the Sea and Sage Audubon Society came by and when I told her of the poor loon's predicament, she said she will notify the bird rescue group of Orange County.

The Tropical Kingbird was not as easy because there were a couple of Cassin's Kingbirds associating with it. There's some degree of difficulty separating the two similar-looking species since they usually stayed high up at the top of the trees and most of the time against the morning sun. So I did what every bird photographer would do in such a situation... take photos of all three birds and then study them at home with the help of various field guides. Looking over the results of my "shotgun" approach, there was indeed a kingbird that had much more yellow on the undersides that extends almost up to the throat. And the notched tail also was a giveaway. 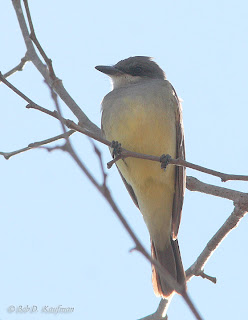 As I drove home, my headache was a bit exacerbated by my concern for that hapless loon that seemed to be stuck at the edge of a small lake in Orange County.

Nice shots! I've learned that volunteers from the Wetlands Wildlife Care Center in Huntington Beach went down there to try to catch the loon for rehabilitation, but it flew off before they could get it. The fact that it's well enough to fly suggests it's recovering--let's hope this is the case!

Hi Felicia,
Thanks for the heads-up. It seems like our loon is quite healthy. :-)

What a beautiful loon. I hope it fairs well.

You sound like me with my images. I learn so much by studying them, even when the light is all wrong! Loved your new kingbird.

I would have been concerned too. I have never seen a loon on dry land. Good to know that it was able to fly off.

I hope the headache dissappeared :)