Cynthia and I visited the campus of the University of the Philippines which has always been a good birding place according to the local birders. Early morning of the 7th we were happy to meet Gabs Buluran near the Main Library parking lot. He is a member of the Philippine Bird Photographers  (PBP) group (to which I also belong). After a short introduction, he suggested that we go the Marine Science Institute (MSI) area where a Blue Rock Thrush was recently seen, apparently quite a rarity here. Soon we were joined by the other members of the PBP - Mark, Toto and Ding. It wasn't long before everybody was all pointing their cameras up a tall acacia tree - for there perched nonchalantly on a branch was our Blue Rock Thrush! Eventually the bird flew off and the excitement died down a little...except for me. For them seeing Yellow-vented Bulbuls was like seeing Black Phoebes in California...they were just everywhere! But for me, although I've seen this species in my previous trips, I was still thrilled to watch them gobble up the berries from a nearby fruiting tree.

The members of the PBP meanwhile would talk shop until one of them would yell "Black-naped Oriole" and everybody would be all agog, then a short pause, and once again, "Colasisi!" (a tiny hanging parakeet) and we would all point our cameras in that direction. This was then followed by a shout of "Pied Triller!" and the routine would be repeated. After a while there was a lull in bird activity and everyone spread to cover more birding ground. Luckily we tagged along with Toto who discovered a Yellow Wagtail lurking in the grass.

With bird presence now limited to the ubiquitous Bulbuls, everyone agreed that we return to the Main Library area. There we met two more PBP members, Bong and Doc Mando. This time the stake out was for a Coppersmith Barbet a small (yet very loud) colorful bird. We were all scanning the treetops trying to locate the source of the "pok-pok-pok" sound from among the what else - Bulbuls - fluttering about. It was sheer luck that it was me who first saw the Barbet and I excitedly pointed it out to my colleagues.

It was quite anti-climactic after that and reluctantly we bade goodbye to our new friends.

Cynthia and I had time to kill on Sunday morning before attending church services so we decided to visit the University of Philippines again. We went to the MSI area where we were treated to a show that I will not forget for the rest of my life. It was like watching an episode in the Discovery Channel. Too bad we did not have my videocamera with us, but luckily I was able to capture some of the scenes with my camera. The fabled Blue Rock Thrush was on the ground battling a defiant Praying Mantis. The insect which was about 5 inches long was standing up with wings spread making it appear bigger than it actually was. The Thrush was circling trying to find a vulnerable spot and an opportunity to make a swipe at its formidable looking prey. Sometimes the bird (which is about the size of an American Robin) would turn away pretending to lose interest on the mantis. Interestingly, the insect did not fly off when given such a chance, determined instead to stand its ground. Patience paid off and the Thrush was able to strike a fatal blow. To the very end the Praying Mantis held its head up high bravely facing its conqueror. 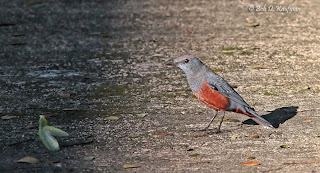 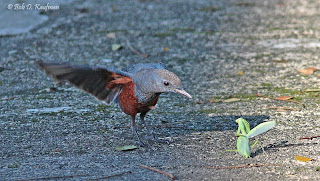 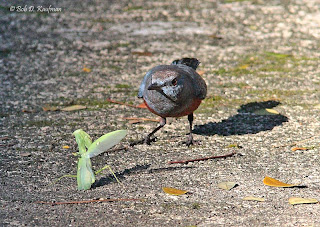 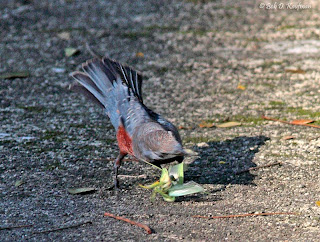 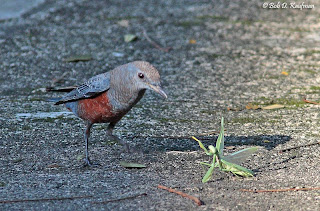 For other (less brutal?) birding blogs and photos please visit:

The Blue Rock Thrush is a beautiful bird. Your photos are great. What a fun experience for you to be back after 30yrs.

Nice series on the thrush! Birds like that tempt me to expand my birding beyond NA.

Amazing photo sequence with the robin. Not missing the camcorder at all with photos like that!

I have the same reaction when birding in a new area. The most ordinary birds are wonderful when you don't often see them.

Very cool! Glad you're enjoying your trip home—and all those birds, too!

Great photos and you are lucky to have a whole new world of birds to explore! Its especially good that you already have some knowledge of the birds there so you are not totally overwhelmed by new species. Good luck with them all and I look forward to you sharing them on your blog.

Wow, what an amazing interaction between the thrush and the mantis! It's like watching "Crouching Tiger, Hidden Dragon."

Super series of the Blue Rock Thrush and the praying mantis Bob! What an amazing event to watch.

Are you going to be in the Philippines for awhile or just a vacation?

@Larry, just a vacation, albeit a short one.

Thanks everyone for your nice comments!

great catch and it is always nice to see birds in actions.

What a fabulous trip it sounds like you had. And great photos of the thrush/mantis battle.

Wow!, what a great encounter of nature process.