Franklin's my dear, I got a lifer!

I thought I would be getting my first dip of the year. Not a good way to start the year was what I felt as I left Legg Lake a little before 10 am, Monday morning. I was searching for the Franklin's Gull that was observed here just the day before. After going around the lake looking at every single gull that was there, and not finding my quarry, I reluctantly left for home.

After lunch I checked the Yahoo group postings for a possible update on the gull's whereabouts. Chris Akiyoshi, a birder friend, who originally found the bird, posted that it was seen again by the main lake at 11:30 am. By 4 pm I was once again scouring the shores on the north side of the lake. Ed Stonick, another birder friend, was already there and gave the bad news that he couldn't find the Franklin's Gull. When he said he will try to look for the Tropical Kingbird, which hangs around the middle lake, instead, I decided to go the south side of the main lake and try my luck there.

There were a bunch of Ring-billed Gulls standing on the shore when I arrived. Then I noticed a smaller gull with some dark feathers on its head. My heart leapt as I realized that I finally found my lifer! I started taking its photograph when a kid came and flushed all the gulls away. Luckily I was able to get a few shots before the gulls, including the Franklin's, flew off to parts unknown. I checked the north side again when I returned to the parking area but the little gull wasn't there.

Nevertheless, I am quite happy that I got my 505th lifer, just 4 days into the new year. 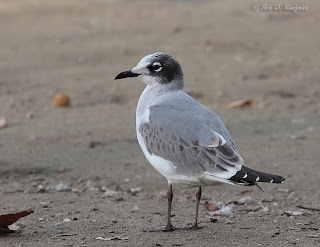 For other (just as thrilling?) birding blogs and photographs, please visit:

that is a goodlooking gull. I am glad you had teh chance to see it.

Yeah!! Glad you got your bird, and a really nice photo too!

Glad you got the bird you wanted - and you have shown the rest of us what determination can do!