The light was fading fast. It had been a gloomy day to begin with. Looking up at the branches of a tall acacia tree, Cynthia and I were searching for the source of the twittering sound emanating from somewhere up there.

We were at the campus grounds of the University of the Philippines in Quezon City. It had been 10 days since we arrived in the Philippines and we've never gone out birding yet. Trying to settle down and getting started again in our native country wasn't as easy as we thought it would be. But my birding itch had to be satisfied. We had finally bought a Nissan X-Trail from a birder-photographer friend that morning and I begged my wife to come with me to UP despite the fact that it was already late in the afternoon. I needed her because she's the one who knows the directions on how to get there. It's been a long while since I drove in the streets of MetroManila and a lot of changes had occurred since then.

There we were listening when suddenly we saw a brownish bird alight and began tapping on the branch. A Philippine Pygmy Woodpecker! A lifer for both us. I managed to get off a few shots of the bird silhouetted against the darkening skies. The photographs turned out to be of "documentary" quality only. As we continued to scour the tree branches for hopefully other species, a young man approached us. He turned out to be Bert Madrigal, another birder-photographer and a co-member of the Philippine Bird Photographers (PBP) group. When asked if he had seen the Scops Owl that was photographed in this area recently, he said that it had not been observed in the last 3 days. As dusk fell, we bade him goodbye and we went home happy that we have gotten a lifer. 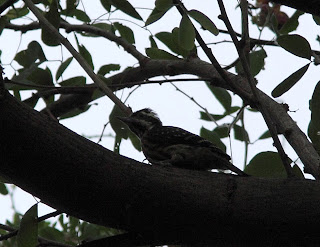 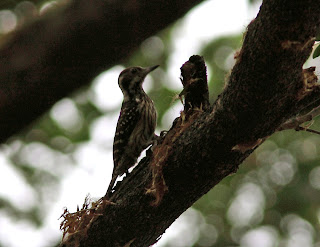 Early the following morning, we were at Loyola Grand Villas at the invitation of JV Noriega, another member of the PBP. This time our target bird was the Philippine Hawk-Cuckoo that had been frequenting this area lately. We were soon joined by Ralf Nabong, another PBP member (and the guy who sold me his SUV). Two hours of vigilance but the bird was a no-show. A sumptuous breakfast at JV's home concluded our morning's sortie and erased the disappointment of not seeing the bird we came to look for.

Light was fading fast. It had been another gloomy day to begin with. This time we are in the company of Tonji and Sylvia Ramos and Tina Mallari (all of whom are also members of the PBP) as we staked out an open field in the Ayala Alabang Country Club. Camera gears all set-up we waited for the sun to set. Our target bird this time was the Savannah Nightjar. Three of them actually. 7 pm and the birds started flying in. The unmistakable white stripes in their underwings confirmed that Cynthia and I have seen another lifer. At 7 pm the area was just too dark for my camera to capture the nightjars. We dared not use flashes so as not to spook these intriguing creatures. After about 30 minutes, the nightjars flew off towards the trees. We gathered our gears and thanked our gracious hosts not only for showing us the Savannah Nightjars but also for their generous hospitality.

It was a long drive back home and although a part of me was a bit frustrated for not being able to photograph the birds, the birder in me was quite happy to add another lifer to my list.

For other birding blogs and photographs please visit:

What a gorgeous fella!
Lucky you to have spotted him :D!
Congrats!

All those new birds are great! Going birding would have to be a very nice way to get settled into the new place where you are living.

Great to be able to add to the lifer list even if no photos.

So you've finally made your way back to the Philippines! I'm glad you've hit the ground birding—can't wait to see what else you'll discover out there!

Wow, a Pygmy Woodpecker! How big is that little guy Bob?

Congrats on all your new lifers! I know, now that you are back in the Philippines, you will be getting many more.

Thanks for keeping us updated on your experiences over there. I look forward to more great posts and I know the photos will be coming!

@Larry, they're just about the size of a Downy Woodpecker.