I have not been birding for quite a while. My son, Kurt, is here visiting from the United States. Since this is the first time in 23 years that he will be seeing the country where he was born, I've been busy showing him around. And as any self-respecting birder knows, the longer you don't go birding, the stronger the itch becomes.


When fellow bird photographer, Bong, informed me that he and another colleague, Ely, will be at the University of the Philippines campus in Diliman on Tuesday morning, I got excited. It so happened that I had a couple of hours to spare that morning before I return to my paternal duties, so off I went.


My first destination was the area in front of the Marine Science Institute (MSI) building. This is the haunt of the Blue Rock Thrush. And sure enough, as soon as I had my gears ready, it  flew to its favorite acacia tree. It wasn't long when Ely arrived and joined me. We both discovered that Blue Rock Thrushes (or at least this one that we're looking at) also eat fruits! It would swallow whole the red berry-like fruit of a palm tree and after a few moments regurgitate the seeds out. Very interesting since I thought all along that these species are insectivores. 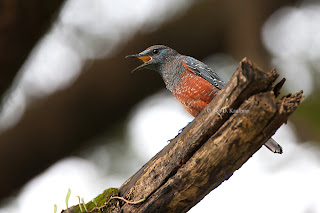 Ely and I were photographing the thrush's antics when he got a call from Bong. Bong informed us that he saw the now famous juvenile Philippine Serpent Eagle near the Vargas Museum not far from where Ely and I were.


Perched on a tree not far from the museum building, indeed, was the Serpent Eagle. Unmindful of the three birdnuts (which were later augmented by some curious students) taking its picture from different angles, the raptor just stayed there seemingly to the point of utter ennui. 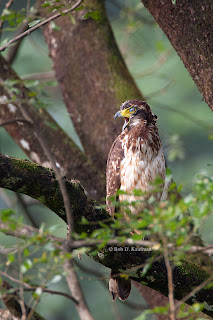 Two hours went swiftly by and I bade my comrades adieu. I was smiling as I drove home, thinking, what do you say when your itch had been scratched? You say, "aaahhh!"
Posted by Bob Kaufman at 9:54 AM

Nice photos and story too...

Hello,
I m Really looking forward to read more. Your site is very helpful for us .. This is one of the awesome post i got the best information through your site and Visit also this site
Nandi Hills
Really many thanks