I'm not exactly sure why I am fascinated with Oriental Pratincoles. They're not among the gaudiest birds in the Philippines. As a matter of fact it's quite difficult to see them unless they are flying. Perhaps in the deep recesses of my mind I might have seen them in the early years of my birding life, more than thirty years ago. I would travel by public vehicle and get off at the side of some remote provincial road. There, unaided by binoculars or a camera, I would gaze at the freshly plowed rice fields before me and try to figure out what those brown birds moving about were. Maybe they were sandpipers. Or rails. Or pratincoles.


When I returned to the Philippines in March of 2010, I kept asking my birding buddies where I can find these birds whose memories seemed to have been imbedded in my brain. It was in September 10 of that year that I first (again?) saw the pratincoles. The place was San Juan, Batangas, but the birds I saw were fleeting glimpses of what appeared to be gigantic swallows gliding smoothly a great distance away.


Then came that fateful day in February of 2011. My wife and I were in Candaba having just seen a White-shouldered Starling when I saw the same gigantic swallow-like bird fly past us and land at the muddy field nearby. We gave chase and my heart pounded heavily because this time I was afforded a really good look, and even got some pictures of, my dream bird despite it still being a considerable distance from us.


We had another encounter with this species several months later at almost the same spot in Candaba but this time they were once again on the wing and never even bothered to land.


When birding friend, Undersecretary of Agriculture Fred Serrano, informed us that Oriental Pratincoles were quite plentiful at the Agricultural Park in Los Banos, Laguna, we were a bit skeptical. Only because we didn't see any the last time we were there. Then a week ago, Fred informed us that the fields have been recently tilled and the pratincoles should be there, he assured us.


Early in the morning of Saturday, June 4th, Cynthia and I were at the Agricultural Park, this time in the company of Professor Tirso Paris of the University of the Philippines, Los Banos. It didn't take us long to spot the unmistakable flight of the pratincole. But now they were also landing on the muddy fields. Not only that, they were quite close! Which made me conclude that this must be the Pratincole center of the Philippines.

"pratincole center" - trust me, there are two pratincoles in the grassy paddy area 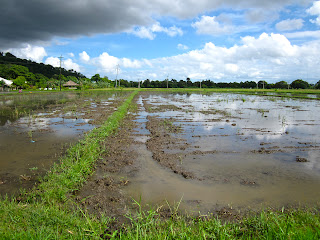 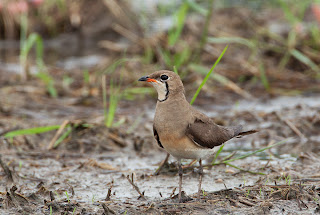 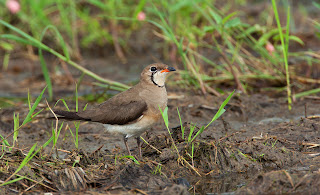 This one surprisingly landed only a few feet away from Cynthia, who tried to juggle an umbrella (it was scorching hot even at 8 am) and her camera in order to take this picture. This was the first time we've seen it land on a grassy area instead of the usual muddy one. 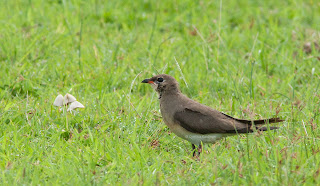 You got some great shots of a very cool looking bird there Bob. I hope the Oriental Pratincole was all you remembered it to be, and more. Well done!

Awesome photos of the pranticole!