Don't Shoot Until You See the White-eyes

My wife, Cynthia, is my birding partner. More often than not she would also carry a camera to take pictures of the birds we see. However, whenever we meet new people in our bird photography trips, she would almost always introduce herself as my "director". I am the cameraman and she would be the one to tell me what to shoot, when to shoot, where to shoot, what angle, how often......well, you get the picture (pun definitely intended).

It was pretty much the same scenario during our recent trip to Kota Kinabalu. On our very first birding day, we were up early. We were standing at the terrace behind our suite looking at the fruiting tree which was now slowly being illuminated by the rising sun. To our delight that particular tree soon became a center of avian activity. We observed some sort of a pattern wherein a flock of birds would come, feed on the fruits, then move on. A few minutes later another (or probably the same) group would repeat the whole routine. Without fail, the first birds to arrive, the leaders of the flock, so to speak, would be the Black-capped White-eyes - tiny olive-green birds with black-caps and white-eyes, of course.
With my camera gear now on place, I aimed my long lens at the general direction of the said fruiting tree. We waited for the next wave of birds to come.
"Don't shoot until you see the white-eyes", my director-wife instructed me. I'm not sure if she was even aware of what Colonel William Prescott told his soldiers in the battle of Bunker Hill ("Don't shoot until you see the whites of their eyes") but what she just said sure made me laugh I almost missed the white-eyes. 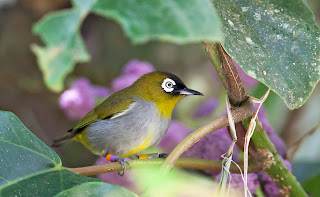 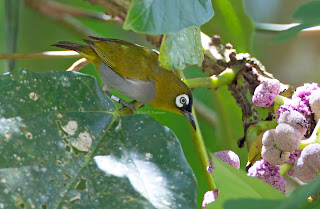 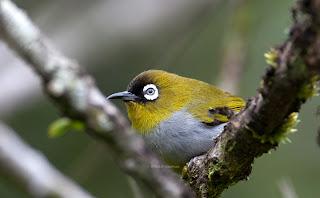 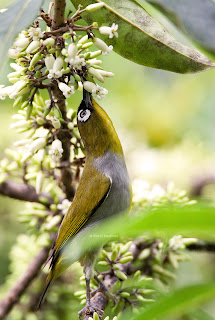 Congrats to both the director and the cameraman. The photos are great. Not only can I see the white around the eye but most also have a glint of light in the eye. btw are those all taken in the same tree. The flowers look different in a couple of photos. Also I can see bands on some of the legs.

Mick, there are actually two trees next to each other, One is the fruiting tree I mentioned in the blog, the other is taller and had broader leaves. Some of the birds inside Kinabalu National Park are banded to monitor the areas they frequent and the population.

What an amazing looking bird!

WOW!!!, I was not prepared to see such an expressive bird!!!

it is hard to miss that one. Great shots Bob. :)

Teamwork! Those white-eyes can be hard to capture in a photo, so well done, you two!