Going for the Keel

Bird photographers are, generally speaking, a persistent sort. If they failed to accomplish a mission the first time around, they will try again. As long as an opportunity to take a picture of a particular bird presents itself, they will be there. Sometimes that persistence pays off, sometimes not.


A very good example was what happened to a trio of bird photographers last Saturday. For Neon, Bong and myself, the desire to capture the image of a male Narcissus Flycatcher still burned deeply in our photographic souls. We failed in our first attempt about a week ago. Persistent folks that we are, we were back at the area next to the Main Library of the University of the Philippines in Diliman hoping that our luck would change.


Bird photographers are, generally speaking, quite adept at making lemon juice out of sour lemons. During our vain vigil for the vagrant flycatcher, there were occasions when we turned the proverbial lemons into lemon juice. There was the time when our better halves (who accompanied us into this birding foray) spotted a Coppersmith Barbet nearby. Lenses were aimed and shutters clicked at the colorful bird. 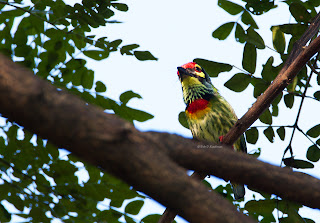 Then there was the focusing challenge presented by a flock of frolicking Flyeaters. 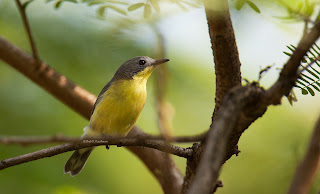 Or compensating for the backlit image of a Long-tailed Shrike grabbing a lizard by the head. 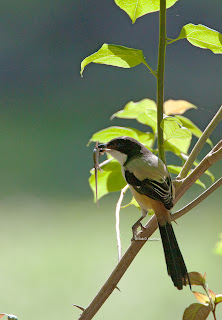 The real adventure came later though. When we were pretty much certain that it would be no use waiting for the Narcissus, Neon suggested we go for the Flowerpeckers reportedly flying friskily close to the Post Office building. Did I mention that bird photographers, generally speaking, love challenges?


Facing the mistletoe tree, the three of us spread out and observed the comings and goings of those tiny, active, feathered creatures. "Red-keeled Flowerpeckers!" Neon informed us. It was quite a surprise to learn that these dainty birds thrive in this semi-urban landscape. It was a trying experience photography-wise, yet exhilarating as well. 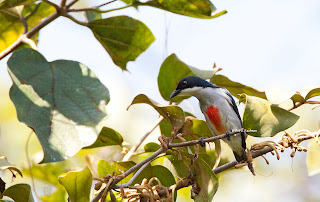 All the while that we bird-photographers were having our adrenalin rushes, our faithful partners decided to sit it out and killed time by munching chestnuts and sharing spousal stories. 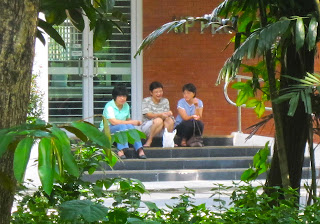 The adage "time flies when you're having fun" certainly rang true for us that special sunny Saturday. Soon it was almost noon and it was time to go.


We were all thankful that we decided to go for the keel. And got keeled!
Posted by Bob Kaufman at 9:04 AM