February 20, 2021 - My wife and I decided to forgo our usual Saturday birding trip. It's just that we've been to only two places since the start of the pandemic almost one year ago - U.P. Diliman and Baras and so we would just be seeing basically the same birds. In addition there was a typhoon coming and we were worried that we might get caught in the rain. Unfortunately we are unable to go to the other birding places. Because of our age we have to follow certain protocols that are in effect during this pandemic. Also driving long distances has become physically daunting for me.

So this Saturday we both agreed just to have breakfast at one of our favorite restaurants. Cynthia suggested that I bring along my camera just in case we encounter some birds along the way. Good thing I did. We made a stop at the small waterway by the White Plains road where we almost always see a Little Egret. Unfortunately, it wasn't there but when I looked up I saw it perched on a tall tree beside the waterway. Then it flew and in a short while returned to where it perched earlier. That was some sort of routine for this white wader so I positioned myself and waited until it flew back to the tree top to get some BIF (bird in flight) shot. Luckily I did. 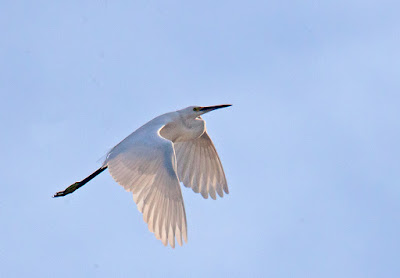 From there we drove along Temple Drive. At the bare trees by the roadside, we saw several species basking in the morning sun.

As we passed along Katipunan Road I suggested we pass by the subdivision where we used to live. We added two more species to our list.

From there we went for our much anticipated breakfast. As expected it was very delicious. To top it off, the cashier and the server remembered us despite the fact that we only visited this place just one time during the pandemic, although as I mentioned earlier, this is one of favorite eateries and we've patronized this place many times before. 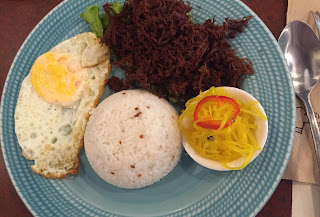 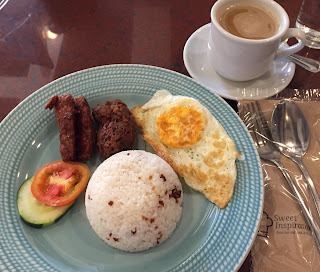 After breakfast, we both agreed to pass by the Marikina River to see the Whiskered Terns and maybe a Little Egret or two. The terns were quite plentiful and we were surprised to find a Chinese Egret!

Even though it was a short "urban" birding foray we had fun and we did see quite a number of birds. Not to mention a very sumptuous breakfast.