What do you do when you turn 61 and is out-of-work?

I thought I'd celebrate my three-score-and-one years of existence by going back to Santa Fe Dam where I had a fairly good birding experience last week. Unbeknownst to me, Wednesday was the day they turn the sprinklers on. Water was spurting practically everywhere...most especially at places where seed-eating birds normally feed. After an hour of driving around and not finding the usual array of avian species expected here, I decided to hightail it to Peck's Pit in El Monte, hoping that the bird gods (not to mention the birthday gods) would shower me with mercy and make the anniversary of my birth not so disappointing as it had been so far.

I always have misgivings whenever I go Peck's Pit by myself. The place had been known to occasionally harbor some unsavory characters. Thankfully, it was not so today. Thankfully, too, that there were sparrows galore.

At the edge of the lake, after taking a shot at a Cormorant, I staked out a Belted Kingfisher which flushed when my subject cormorant flew. Knowing that birds are creatures of habit and that kingfishers usually come back to their favorite hunting spot, I waited for close to an hour for it to return. Alas, all that waiting was in vain. This kingfisher must have kicked the habit, I murmured to myself.

As I was waiting for the uncooperative kingfisher, I noticed a Great Egret fly by. What caught my attention was an orange thing sticking out of its back. When I looked at the picture later that day, my worst suspicions were confirmed - it was an arrow! It seemed that the big bird was none the worse for that, but it makes me mad that someone could be so cruel to do that kind of thing. 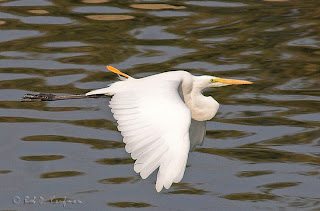 Tired of waiting and upset at what I have just seen, I thought it was about time to go home. Approaching the trees close to the parking lot, I noticed a flock of small birds with dark heads. Juncos, I surmised, and inasmuch as I still don't have any decent photos of these cute migrants, I immediately assumed my best stalking stance and inched closer to where they were feeding. But wait, why were their bellies striped and why were there plain brown birds hanging out with them? Surely these can't be Juncos, but what are they? 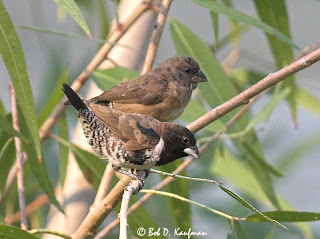 Using my binoculars I focused on the group and realized I was looking at a species that calls Africa its home. Bronzed Mannikins (aka Bronze-winged Mannikins) are small sparrow-like birds that are rather common as caged birds. What I was looking at were most likely escapees that have established themselves in the seed-rich grassland of Peck's Pit.

Now that made my day, and my birthday a happy bird-day.
Posted by Bob Kaufman at 10:54 AM