There's a Kind of Thrush 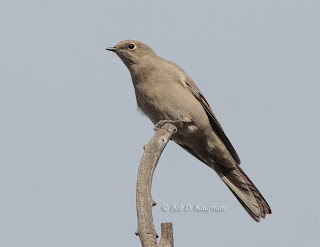 There's a kind of thrush that is unlike other thrushes. It has a long tail and has a plain, dull gray color. Except for a tiny patch of buff on its wing and a white eyering, it is a nondescript looking bird. It may be less attractive than its more colorful cousins but we wanted to see it anyway. The Townsend's Solitaire, should we find it, will be our 87th lifer for the year 2008. A good place to look for it is at Big Bear Lake 8,000 feet up in the San Bernardino mountains.

The sun was slowly emerging from the mountains on the horizon and spreading a pinkish hue on the eastern skies as we drove to Big Bear on Saturday morning. There were only a few people braving the six degree temperature at Lake Arrowhead where we tried to get some warmth from the steaming hot coffee at MacDonalds. It was still freezing cold as we traversed the boardwalk at Stanfield Marsh at Big Bear Lake half an hour later. The Common Goldeneye pair that was reported seen here the day before was now nowhere to be found but a flotilla of Hooded Mergansers were swimming around. Next to the boardwalk Mountain Chickadees were already busy hunting for food.


Our next stop was the Discovery Center at the North Shore Drive. The lady volunteer was very eager to help but when asked about the Solitaire, she didn't even know there was such a bird. "Ask the guy at the Wild Wings store", she suggested, "he knows where to find the birds in this area." We thanked her but before proceeding to meet the local expert, we spent a few minutes next to the feeder that the center put up where a Pygmy Nuthatch and several House Finches were enjoying the seeds.


The gentleman at the Wild Wings store was indeed very knowledgeable of the area's avifauna. He mentioned the possible places where we will most likely encounter the Townsend's Solitaire. One of the places he mentioned was a route called 2N10. When I first heard the name, it seemed strange to call a place "two and ten". Why not just call it "twelve" I thought to myself. 2N10 turned out to be a rural dirt road that only a high clearance vehicle can negotiate. The Forest Ranger that we met told us that the route runs for about 7 miles through a pine forest. Half a mile into it and not encountering any bird at all made us decide to turn back.


We then tried the different trails (located at various points around the lake) suggested by the Wild Wing guy but we dipped on each of those. We even went to the Ecology Center, further east and north of the now dry Baldwin Lake, but the birds there were even more sparse.


At the trail at Juniper Point around 3 pm we saw a single Cedar Waxwing perched forlornly atop a dead tree. As we were going back to the Jeep I told Cynthia that I would like to leave for home earlier than we originally planned. One of the suggestions of the guy at Wild Wings was to look for Poor-wills at Polique Point at the North Shore. They can be easily found along the road as soon as it starts to get dark, he said. As tempting as getting another lifer would be, I would rather not drive through the downhill zigzag road when it is already dark. My wife whole-heartedly agreed. So we decided to do one quick stop at the Discovery Center to prepare ourselves (read: use the restrooms) before embarking on an almost two-hour trip home. Just as we were about to enter the building, Cynthia saw a Robin flitting among the pines. Why not one last attempt at photographing this bird she said. As we were following the Robin, a gray bird flew nearby and landed on a tree across from where the Robin was. There it started flicking its wings as if teasing the somewhat perplexed Robin perched at the opposite tree.

"What bird is it?", Cynthia asked.

"Townsend's Solitaire", I replied trying unsuccesfully to curb my enthusiasm.

"You're joking", my wife said. My non-response and the fact that I kept clicking away with my camera confirmed to her that I was not.

The bright red sun was sinking slowly and its orange rays were surrendering to the blanketing blue back of the evening. Along the way we can't help but talk about our serendipitous encounter with our target bird. We have been searching for it all day and to find one at a place where we were not expecting it was nothing short of a miracle.

I couldn't agree more.
Posted by Bob Kaufman at 1:29 AM

I used to see townsend's solitares on the other side of the cascades near Winthrop, WA in Ponderosa Pine/Douglas Fir habitats. They are kinda of cool with their white circle around their eyes.