“You’ll never know what you will get.”
South end of the Salton Sea. We just pulled into the corner of Lack and Lindsey Roads. There were cars lining up the edge of the narrow dirt road some 20 feet above the shoreline. Birders from the San Bernardino Valley Audubon Society were lined up by the road peering into their spotting scopes at the birds below. We asked one of the birders, Dave Chadsey whom I have met at Legg Lake before looking for the Bay-breasted Warbler,  if there was anything interesting down there. “Just a bunch of gulls, including some Herrings”, he replied casually. My wife and I looked at each other. “Herring Gulls, you say?” I commented in the same casual tone – trying to sound like I have seen this species a gazillion times already (which Dave probably had) – when as a matter of fact it would be a lifer for Cynthia and myself. So I raised my binoculars to the group of gulls bunched together on tiny strip of mudflat below and tried to figre out which of these are the Herring Gulls. As I was just about to take a picture of the gull flock, Dave announced that the group are moving on to Obsidian Butte to try and look for the Yellow-footed Gull. I asked Dave if it’s alright that we tag along. Graciously he said ok. We quickly packed our gear (thus not being able to photograph the Herring Gull(s?) and jumped into our Jeep since the birding caravan had started to move.
By and large, birders are very nice and accommodating. However….
Yesterday afternoon we drove to Unit 1 of the Salton Sea Refuge. At the observation deck, we met an elderly couple who were scanning the area with binoculars. We asked them the usual “Anything interesting?” question. The little old lady smiled and said, “Well, there’s a bird…..”. We waited for the continuation. A few minutes passed. Had we been sitting, we would have fallen off our seats at the unbearable suspense. But then she just smiled and continued looking through her binoculars. At this point,  Cynthia and I descended from the observation deck and walked towards the ponds further down the road, to look for one of our target birds, the Stilt Sandpiper. When we were out of earshot from the couple on the deck, I yelled, “What bird was it?” My wife stared at me and was at once concerned with my state of mind. “I just needed to vent”, I assured her. Having done that, I was now able to breathe normally. Thankfully, as some sort of a palliative, we got our Stilt Sandpipers. 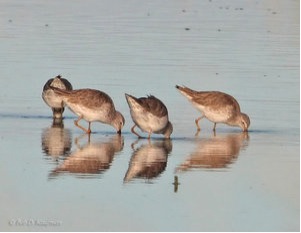 The following morning, at the same area, we met Taurino Tadeo, a young guy we have also met previously at Bolsa Chica. Taurino and I have a lot of things in common: we are both half-Filipino, we enjoy photography, we love birds and we are both exceedingly good-looking (well, at least he is). We exchanged information on where to look for particular birds, him giving us directions on where to find Burrowing Owls, and us showing him where the Sandhill Cranes hang-out during the day. Wishing each other good luck, we parted ways on our separate missions.

Back at Obsidian Butte with Dave and the group, it didn’t take long for them to locate the Yellow-footed Gull. The bird was quite a distance – perhaps the length of a city block - but the San Bernardino Auduboner’s were so nice in letting us look through their spotting scopes. We were so grateful to them for our 7th lifer of the year. 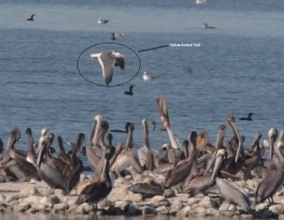 They decided to stick around to look for the Lesser Black-backed Gull, so we grudgingly said goodbye to the friendly group inasmuch as we still have to look for our other target birds: Mountain Plover, Sprague’s Pipit and Chestnut-backed Longspurs.
We failed miserably on those three despite searching diligently for over two hours the areas where they were reported seen. On the return trip home we took the east side (Highway 111) route. On a whim, we decided to stop by Mecca Beach on the north shore of the sea. There we were greeted by gulls! Lot’s of them! Easily I recognized Ring-billeds and Bonaparte’s. Then a huge gull with dark wings flew over and alighted on some rocks about a hundred feet away. “I think that’s a Lesser Black-backed Gull”, I told my wife. “It was reported seen here quite recently.”

A hundred feet seemed like forever when chasing a lifer, but eventually I was able to get close. Close enough to correctly identify the gull as a Lesser Black-Backed. 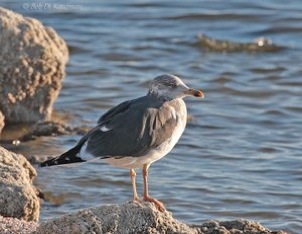 As we resumed the trip home, our conversation went something like...

"What about that other gull?  Is that a third year Western?"

"Could be a winter adult California"

I especially like the photo of the Sandpipers. The gulls sound just too hard!

I'm falling off the chair at your last convo :) It's like looking for the needle in the proverbial haystack... you need to see all the deets to id it correctly and even then...

Congrats on the herring gull... now that you've spotted one, you'll probably see hundreds and get that photo lifer.

Gulls always stump me. I generally recognize size differences, but unless there is something absolutely, clearly distinguishable, I generally just have to call it a gull. Sad, sad... Sounds like a fun few trips.

Great post, always a joy to read about your adventures.

Congratulations on the life bird, we just got one yesterday; an eastern-straying Spotted Towhee. It is so exciting to find a new bird or two! :-)

Good birding to you!

Bob and Cynthia, I love hearing about your birding adventures. I'm sure it brings smiles to many of our faces.

As far as the gulls go... pretty tough IDs is all I can say. I haven't spent all that much time looking at gulls but there sure are some beautiful gulls out there.

And trying to tell first, second and third year Herring Gulls from Thayers and, well, need I go on?

Very beautiful birds. Nice photos. :))) I am generally pretty bad at identifying many of the shore birds. :)))

Funny how some Californians like myself see gulls so often and haven't really learned the various species. Some don't care, but hopefully I will learn the different species. Loved your stilt sandpipers.

Gulls are to hard for me.