Early Tuesday morning as my wife was getting ready to go to work, she asked me if I plan to go birding that day. I stayed home Monday, so she was concerned that I have given up on my project of adding species seen to my year list. But I am a man of resolve, if anything, and I assured her that I will be going to Hansen Dam after I take her to her workplace.

That was the start of a three-day birding binge that covered dam sites – Hansen at Lake View Terrace as mentioned earlier, Bonelli (though technically not a dam, but actually a reservoir) in San Dimas, and Santa Fe in Irwindale. Despite having the same ecological habitat, each one harbors some species that are not found at the other sites – at least during this week.


I always go to Hansen Dam with a certain degree of trepidation, especially when I’m all by myself. The lower parking area almost always have cars with the drivers just sitting there as if waiting for someone, or something to happen. Carrying a camera with a long lens in a trail through a forest where evidence of recent activities by homeless people punctuates every turn can be quite daunting. That is why I stayed close to the water’s edge where it was more open and was nearer to the main, and more family friendly, parking lot. I soon as I saw my target bird – the Common Mergansers, even though they were way beyond photographic range – I called it a day.

Wednesday, I was at Bonelli, where the Painted Redstart is a can’t-miss winter resident. It’s symbiotic partner, the Red-breasted Sapsucker didn’t show up while I was there. The Osprey was also a no-show and so were the Cactus Wrens. I was rewarded however with two species of woodpeckers – a Downy and a Nuttall’s were playing king of the hill, or in this case, the tree. They were chasing each other trying to establish pecking rights on this particular sycamore. At the grassy area near the water’s edge, a Lincoln’s Sparrow and a Marsh Wren (!) gave me a quick once-over before diving back into the dense greenery. 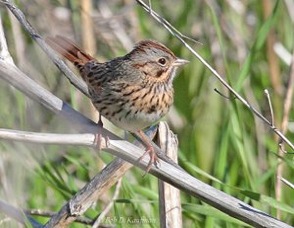 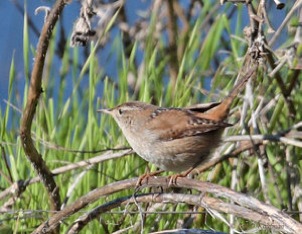 I decided to drive to the north shore hoping to see the Gray Flycatcher but dipped on that one. I was watching a single Ross’s Goose mingling with a flock of Coots when into my line of view popped Dave Chadsey, whom I met at Salton Sea just last week. He was quite amused by the all-white little goose who thought it was an all-black Coot. The Coots of course welcomed the goose like it was part of the clan – they would forage on the grass together, swim together and preen together.


The following day I visited Santa Fe Dam. The area next to the willow forest was always a good place to find birds. Yet as I completed the route, I did not see anything except for a particularly skittish flock of Savannah Sparrows. The usual Rock Wren pair and the family of Orange Bishops were conspicuously missing. Then the reason for all this emerged from the bushes, gave me a quick glance and trotted off back to the bushes. This coyote was roaming around the area perhaps in search of breakfast. Not long after, a Cooper’s Hawk glided by. No wonder the tiny birds were scarce – the predators were in full force that morning. I trekked back to where the Jeep is parked starting to feel miserable. Dark clouds of gloom started to hover above my head when out of nowhere a Mourning Cloak appeared and circled around me and flew off taking with it the feelings of disappointment that was beginning to haunt my heart. How can I feel sad when a lovely butterfly flies next to me lifting my spirits with its fragile wings?


As I drove towards the exit, I saw a brown bird standing on the stones by the roadside. As I came near, I realized it was a Rock Wren! It even stayed put until I was able to park the Jeep, walk towards it and take its picture. 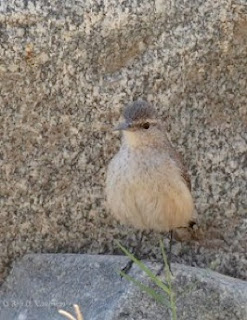 Encouraged by this turn of events, I decided to continue to where the nature center was. The trails were buzzing with Yellow-rumps and White-crowned Sparrows. I was standing in the shade of a tall bush when I heard what sounded like the sputtering of a car engine behind me. I turned around and lo and behold a Cactus Wren was calling from atop a brush! This species had been quite difficult to find lately even though they were known to reside both here and at Bonelli Park. 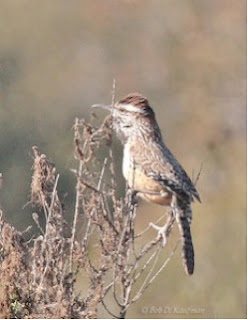 I’m not a superstitious person – far from it, but the change of luck after being buzzed by a butterfly, the first time that happened, by the way, was something I’d be thinking about for some time.


Frankly, it was damn good.

I used to bird in Pacific Grove at Asilomar (by the golf course). Saw lots of gulls, plovers, sandpipers, loons, grebes, etc. But, I've got to say I envy your sightings! Great photos. I'll trade you a sighting of one stunned Cooper's hawk who knocked himself out trying to get at my feeder birds for a mere glimpse of your magic butterfly! :)

That Lincoln Sparrow is a beauty!