That was the theme of our first of two days of birding at Jacksonville. We would encounter birds and lifers galore but getting photographs of them was another story. Most of the birds were either flying swiftly overhead or flitting non-stop among the shadowy parts of tall trees.

The day started out somewhat ominously as buckets of rain poured upon us as we drove out of Orlando. As we neared the junction of Highway 95, the road that would take us north to Jacksonville, the rain stopped. And so did our GPS unit. It just completely died. Of course, we would be completely lost, literally, without it. I started to panic. Without a GPS we would never be able to go to the birding places we planned to visit. Then we noticed that the city of Daytona Beach lies at the end of I-4, the freeway we were currently on. We prayed that we would find a store there that sells this handy gadget. Just after exiting the freeway, we were so glad to find a Target store almost immediately. We procured a new GPS unit and happily continued with our journey.

Our first stop was Little Talbot Island State Park, where the presence of fishermen and beach goers meant the variety of birdlife was quite limited. Except for the Laughing Gulls, a couple of Fish Crows and the ubiquitous Boat-tailed Grackles, we didn’t see much. We managed to photograph a pair of Mottled Ducks in one of the ponds along the highway. Other than that, it was just the usual melange of egrets, gulls, pelicans and terns.

At Ft. George Island Cultural State Park was where we chalked up most of our lifers. The combination of forest and lake side was ideal for a diversity of birdlife. Driving through the forest, we caught a glimpse of a Pileated Woodpecker, which promptly disappeared as soon as we got out of our car. At the parking area we added two more species to our lifelist: Carolina Chickadee and Tufted Titmouse, both of which stayed high up in the trees, constantly moving behind the branches and leaves. Here we met Roger Clark, the Park Ranger. We had a long talk about birding at the Jacksonville area. Every now and then, Roger would stop and point to a bird flying overhead. “Chimney Swift!”, he would call out. Or “Wood Stork!”, “Swallow-tailed Kite!” Everytime we raise our cameras to take a picture of these lifers, they would invariably have already flown past our shooting range. Noting our frustration, he suggested we go to the upper deck of his house (which was within walking distance). According to Roger, Northern Parulas would always gather in the afternoon to bathe and feed at the “drip” and feeders that he set-up in his backyard.

We proceeded to Roger’s house and staked out the feeders and the drip. But there were no Parulas. A Ruby-throated Hummingbird would occasionally visit the feeders,but that’s just about it. Soon Roger arrived (he stayed behind because he had to close the park gates at 5 pm) and he was incredulous when we informed him that the Parulas were a no-show. Just wait a bit more, he said encouragingly. First the Cardinals will come and the Parulas will follow. And just like that, soon we were surrounded by the “teacher” “teacher” songs of the Cardinals. Then came the Parulas, one of which afforded us some good photo ops. 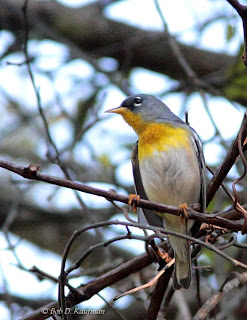 We thanked Roger profusely for his kindness and finding for us a lot of lifers. Despite a not so promising start, the first day of our birding vacation ended beautifully.

This is part of a bird-photo carnival at Birdfreak. Please see other entries at:

Hola amigos,
It is good that you managed to get some lifers after all.
I too find it hard to photograph some birds (to be honest, MOST birds)
They are fast and I'm never fast or precise enough... I get blurry images or not even that!
I'll wait for the next parts of your trip :)
Besos,
Mel

Very nice capture of the Parulas Bob. I love the phrase "usual melange of egrets, gulls, pelicans and terns." I'm sure Bob, that you know some folks would give body parts to see some of those birds!

Remember, our everyday birds are lifers for someone else!

It's great to meet someone like Roger isn't it? What a wonderful day you ended up with. I hope the rest of your birding trip goes as well.