Do You Hear what I Hear?

There were confirmed sightings of a Yellow-throated Vireo at Peck Pit in Arcadia last Sunday, June 21st.

Peck Pit - not a flattering name for a place that would host such a rare avian visitor as a Yellow-throated Vireo. But that's how it is known to birders in the San Gabriel Valley. It's real name is Peck Road Park and is actually more popular among fishermen due to the trout and catfish population of the lake within the park. No one really knows how it became to be known as "Peck Pit" to birders. Note that only birders refer to it by that name, not the fishermen and not the occasional picnickers.

But I digress. Monday morning I was at the "Pit" hoping to locate the aformentioned vireo. After going around the park and not finding the bird, I sat at one of the picnic tables not far from the parking lot, pondering what to do next. As I sat there deep in contemplation, a birder approached me and asked the inevitable "Have you seen it?" question. I shook my head and smiled sheepishly at him. Only a passionate birder would understand the feelings of "dipping" on a rare bird and this guy knew instantly what I was experiencing by the pained look in my eyes.

"It was here yesterday", he assured me, pointing to the tall sycamore trees not far from where we were. "Best way to find it is to listen for it," he said, explaining that it is visually difficult to spot the vireo as it blends perfectly with its chosen habitat. Then he asked the question I was afraid would come next: "Did you hear it calling this morning?"

I explained apologetically that I was a bit hearing impaired. I can hear normal human speech (at close range) but not the high pitched twitter of tiny birds up in the treetops. "No problem", he said as he asked me to follow him under the sycamores. In a few minutes he was exclaiming: "I can hear it!" followed almost immediately by: "There it is!" Indeed there it was, a tiny yellow green bird peering at us from among the yellow green sycamore leaves. I was even able to get off a few photos. 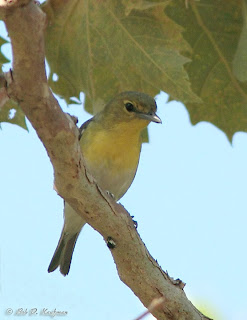 "Well, I got to go work", the guy said. I thanked him profusely for finding the bird for me as he waved goodbye. This has happened quite a few times in the past when a birder would lead me to a rare bird. My wife calls these people "angels". Today, not only did I get an "angel" named Larry, he became my hearing aid as well.

...beautiful little bird. I've never been able to photograph one of these. You've got a very nice capture on one here!

Do you mean Larry, the hearing aid or did you get a real hearing aid? If so, good for you ;-)

if someone in the future (let's call him Larry II) finds an Eskimo Curlew - for example - would that make him Archangel Larry II?

Just wondering...
but wouldn't that be nice?

@Dale, if Larry II could show me an Eskimo Curlew or an Eared Trogon in California,I'd call him Saint Larry II, LOL.

Nice capture of the Yellow-throated Vireo Bob. I'm getting to feel very special with all this talk about "Larry" blended with angels :-)

You get that every now and then, same thing happened to me last weekend where a passer-by took me to a fishermen wharf to witness a colony f black crowned night heron, how nice.

Looks like you and Vickie both found vireos this week. Great picture, and what a wonderful story. As a relative newcomer to birding, I can't count the number of times a kind soul has stopped and gone out of his or her way to help me find rare birds (or even common ones that are just new to me). Yet another reason I love this hobby!

Lovely bird and photos. I like your angel - the helpfulness of most birders I've met is extraordinary. It's a great community to be part of.