Things seem to be looking up. Patches of sunshine were peeping through the gray clouds promising fair morning weather. The Renaissance Faire held annually at Santa Fe Dam was finally over. My birding and photography fix can now be satisified at a place that I wanted to visit for some time.

Alas, parking lot #5 and the access to the willow forest was closed due to some construction. There goes the possibility of sighting the sparrows and orange bishops, I told myself. Undaunted, I tried the trails behind the Nature Center at the other end of the park. Immediately after crossing the paved bike path, I noticed some movements from a bush. Suddenly a Cactus Wren emerged, saw me, sized me up and then dropped the pieces of dried grass hanging from its beak and uttered what can only be described as the sound made by the strained cranking motor of a Studebaker. (For you young people, you have to google that name). That was what I presumed to be a signal because Cactus Wrens began popping out of bushes only to vanish just as quickly - not unlike those critters in the Whack-a-Mole games. Pretty soon the original rabble rouser himself disappeared. When I returned to the exact same spot fifteen minutes later it was so surprisingly quiet as if it had been devoid of life for centuries. Had I told somebody that this place was the convention center of Cactus Wrens just a few minutes ago, he would have laughed at my face and pronounced me wacko right there and then. Or complimented me for my vivid imagination. 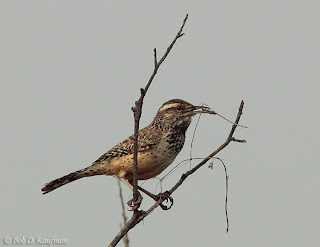 Closer to the Nature Center it was even quieter, bird-wise. So I just contented myself at photographing the various blooms in the area. Then it happened. A chattering noise, a flash of brown that landed on a dead branch. Bewick's Wren. It saw me, raised it's tail, turned around and was gone as quickly as it appeared. 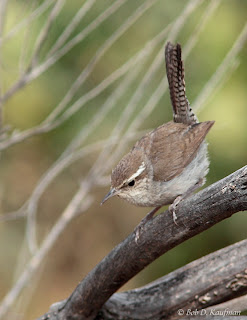 Then came the "ark", "ark" of the Ravens. Six of them were on the ground making those raspy sounds peculiar to their tribe. It seems that they were looking for something - perhaps a carcass of some unfortunate animal. Not finding what they were searching for, they flew off. However two of them circled a few feet above me, all the while making those raucous calls, occasionally swooping close to me as if I were some dead meat. Come to think of it, flies were swarming all over me, too. I needed to get out of there. Fast.

Back at the main area of the park, the lack of bird activity created such a gloomy condition in much the same way as the darkening skies did. It was only ten in the morning and while driving, I was debating with myself whether to go and have an early lunch or to linger awhile and hope for better encounters with the bird kind. The answer came almost immediately. By the roadside were a couple of brown birds hunting for insects among the grass. I made a quick u-turn, parked on the shoulder and peered through my binoculars. My eyes almost popped out of their sockets when I realized I was looking at Rock Wrens. There they were, the Mom hunting for food and then giving them to the almost full grown offspring, both unmindful of my watching them a mere twenty feet away. 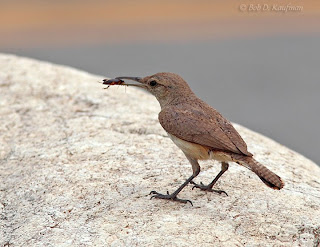 And so my birding day at Santa Fe Dam was highlighted by these three wren species. My week-long hiatus was finally over and it felt like a renaissance was sparked within me. As I mulled on my birding plans for the very near future, rain fell.

Such interesting birds - and so very different from the wrens I posted! I like your play on the name too - wrenaissance!

thank you for stopping by my blog.
Dale

...lovely photos...these little birds are so cute. I have to agree with Mick--nice play on the word "Wrenaissance!"

expect the unexpected or better still have no expectation at all for the day (birding)...let nature surprises you. the wrens with food in his beak is a great photograph

Wrens are had to get great photos.

Who doesn't love wrens?! When I discovered a little house wren nesting in my backyard I felt like I'd won the lottery. Great photos, thanks for sharing.

thanks so much for following my blog page, your support ,,,is mucn appreciated.

You always find interesting places to visit!
All those Wrens would be lifers for me. Love the title of the post!

Lovely sightings. I'm very envious of the ravens. I've only ever seen one in the zoo. Awesome birds.