Tales from the Pit - Episode 2 - Heron There

Peck's Pit - a name that stirs the imagination. Images of a dark, cavernous place fraught with creatures that defy description are conjured by the mere mention of that name: Peck's Pit.

In reality, it is a park-like area where picnic tables stand over lawn-like grass and shaded by oaks and sycamores. Then there's the lake where fishermen cast their poles with the hope of catching some catfish. It is also a favorite haunt of birders, particularly of late, when some unusual birds were spotted there.

And so, self-respecting birder that I am, visited this birdy place with a strange name a few times trying my luck at finding those unusual birds. There were times I got lucky - seeing both Blackpoll and Lucy's Warblers (see my previous blog) - but more frequently, I wasn't. Although I missed out on the rarer kind, the local bird population, most especially the herons, have been quite cooperative.

One fine day as I was scanning the tiny strip of land in the middle of the lake for a possible Solitary Sandpiper (yes, that single bird bane of my life) and once again dipping badly, a Great Blue Heron suddenly gave a loud squawk and flew towards my side. With the agility of a hungry leopard, I lifted my camera and captured the flight of the huge wader. 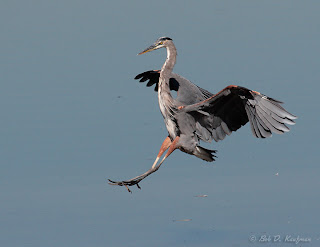 A couple of days later, at the north end of the lake, while searching for a Northern Waterthrush (and again failing miserably) I saw a Black-crowned Night Heron knee-deep in green duckweed water. Actually herons don't have knees but I'm just trying to anthrophomorphize the scene I was witnessing. 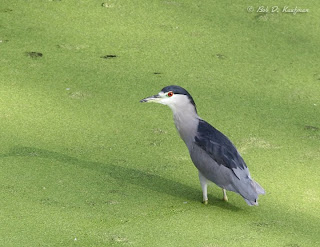 A short distance from it, a Green Heron, hating to get its feet wet, perched on some branch jutting from the greenish puddle. 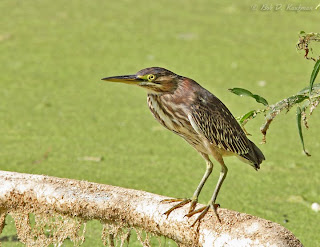 Getting pictures of three herons there on the pit is quite a feat and I was happy I picked a place like Peck's.

A nice collection of herons - a couple more, and you'd have a winning poker hand. That first photo is very striking, well done capturing the bird mid-flight like that.

I love the photo of the Great Blue coming in for a landing too. Didn't really see all the details until I enlarged the photo...it really shows his beautiful eye.

Those great blues are tough to get in flight - nice job

Awesome heron captures Bob! The Great Blue is fantastic (all due to your leopard like agility no doubt). But just to get such great photos of 3 herons in a short time is pretty good shootin' partner!