I’m thinking of taking up astronomy. After all, among the local birding circles I am getting to be known lately as the “big dipper”. Since finding the Lucy’s Warbler a month ago (thanks to the help of Steve and Becky) I have dipped consistently at finding the uncommon migrants that passed through the greater Los Angeles area. Missed the Brewers Sparrow, the Northern Waterthrush and Black-throated Sparrow at Peck Pit and the warblers at Laguna Tams. I didn’t even bother to chase the rarities at HCP. And of course, the bird that holds a certain degree of schadenfreude for me – the Solitary Sandpiper - from everywhere!

So I considered my visit to Santa Fe Dam last Tuesday as my “physical exercise” (yeah, right! uh-huh). As was expected, I dipped miserably on the Vespers and Grasshopper Sparrows. At least I got the White-fronted Geese – now even a blind birder, if ever there was one, could not miss these birds. My day, however, was made right by the unusual cooperativeness of wrens. Two kinds, actually. The Rock and the Cactus.

First off, as I was traversing the path along the spillway, two, count ‘em, two, Rock Wrens were busily hunting for food a few feet away from me. They just did their thing, completely oblivious of me as if I was merely a part of the landscape. This was one of those rare moments that I don’t mind being treated like dirt. A couple of hundred feet up the path, another Rock Wren was basically doing the same thing. 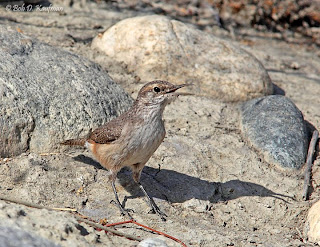 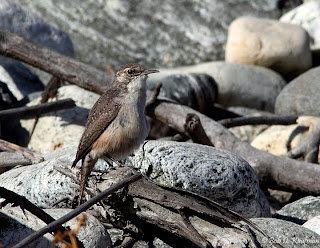 Checking the grassy area just below the spillway for the uncommon sparrows and seeing nothing but the (ho-hum) Savannahs and White-crowneds, I returned trudgingly and perspiringly to the parking area. (Oh look, there’s those White-fronted Geese again, whopee!). I drove over to the other side of the park where the nature center was and hoped I won’t be mobbed again by vicious Ravens like my last visit there.

Just a few feet off the bicycle path I noticed a Cactus Wren building a nest! A little bit unusual for that to happen in October, I mused. But opportunity presented should be opportunity taken. And so for a good half-hour, I waited (the wren would fly off away from sight and would return minutes later with nesting stuff in its beak) and watched from a distance the untiring efforts of the this wren in building its home. In the blistering heat of the noonday sun even! After this, I continued on the trail and was surprised to find two, count ‘em, two, more Cactus Wrens playing tag ahead of me. 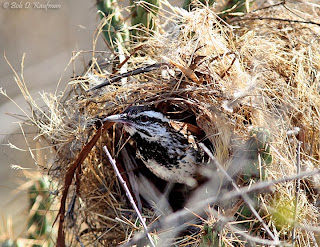 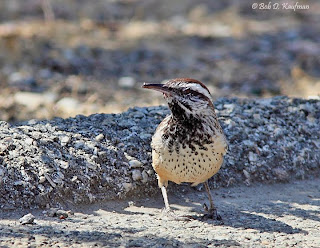 For other (more correct?) birding blogs and photos please visit:

Ha! No sympathy from this birder on your dippiness Bob. I don't care how many birds you have "dipped" on when you come up with a story of seeing two Rock Wrens and watching a Cactus Wren building its nest! Are you kidding me?

I would give a big tip to someone that could lead me to a place to watch a Cactus Wren building a nest!

Great captures of these guys.

BTW, I wouldn't talk to "ho-hum" about the Savannah Sparrow after reading Corey's post over at 10,000 birds ;-)

Sounds like you had a great birding outing. Great photos of the Cactus Wren and the Rock Wren. I believe they both would be lifers for me.

Love those Cactus Wrens...and seeing one build a nest is crazy cool!

Oh, those are great!
And yes, being treated like dirt sometimes is a good thing ;)
I totally love that nest shot.
And you are sooo lucky :)
I admit,I'm a bit envious.
At your "Lick" as well as at your endurance.
I'm not good at enduring the heat, bbrr.... ;)

It is interesting learning bout birds I have never heard of, but thats millions because I'm new to this. I just like taking photos of them and trying to identify them.

Great photos, Bob, and what a wonderful experience! And of course, what could be better than a day with multiple wrens?

CAWR is rather gregarious, but the ROWR is much more shy, at least in my limited experience, so I envy you on those images.