Godwit us ...and everything just falls into place

It was one of those days when everything turned out perfectly. Last Saturday's outing was saved by seeing a Golden Eagle scarfing on an unfortunate Coot. Earlier that morning we completely dipped at finding the Bar-tailed Godwit - a southern California rarity that had been seen it seems by everybody else but us.

But it was completely different this Saturday. We were so lucky to have "angels" who showed us what we were looking for. We planned our birding sortie like so: First, go the Upper Newport Bay and look for the Bar-tailed Godwit, then proceed to nearby Mason Regional Park to see White-tailed Kites - all nine of them, and finally to San Gabriel City to add the Lewis' Woodpecker to our yearlist. Sounds simple. But as any birder knows, accomplishing even the best laid plans is quite a different story.

Bright and early we were next to the bike path beneath the Jamboree bridge at Upper Newport Bay. I was scanning the small strip of land to the west where a bunch of shorebirds were still sleeping. However, one of them was busy foraging the island's edge. It looked different from the  snoozing Marbled Godwits next to it. Is it possible that we finally found our quarry? I was photographing this bird when a couple of birders appeared on the other side of the creek and started peering through their spotting scopes at the opposite direction of where I was pointing my camera! I looked up at these birders with a puzzled look on my face. One of them, perhaps noticing my curious mien, shouted, "The Bar-tailed Godwit is under the bridge!" I quickly left my camera (which was on a tripod), my wife, and sanity, as I ran down from the bicycle trail to the muddy, slippery part directly under the bridge peering at the edge. And then seeing the godwit, which was on our side of the creek, fly off to other side! My wife, who gingerly followed me, saw my exasperation and as in numerous other occasions, consoled me by pointing to the Godwit which was busy looking for food right across from us. I retrieved my camera gear and spent the next hour or so trying to take a picture of our beloved Bar-tailed Godwit. Which was not a simple task considering the bird kept moving as it searched the muddy edge of the creek for food and every so often disappears from view as it gets behind the huge concrete bridge supports. 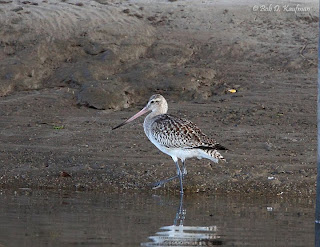 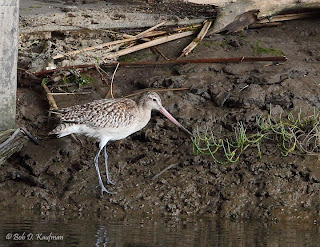 Elated at our success in finding and photographing the Bar-tailed Godwit, we then proceeded to the William R. Mason Regional Park at University Avenue. We drove around the park trying to locate the "wilder" east side where the Kites reportedly hang out. No "wilder" parts, no kites, only picnickers. Cynthia and I were mulling our next move when Shelly, the local Park Ranger, drove up to us. We told her our dilemma and "angel" Shelly asked us to follow her to the entrance gate, where she 1) gave us the directions to the "wilder" side, 2) gave us a map of the park, and 3) refunded our $5 entrance fee! We happily thanked her and without further ado, drove to where she directed us. As we walked into the "wilder" part (which was actually called Phase III of Mason Park) we saw a lady with a camera and a zoom lens (a bird photographer, we rightly concluded). When asked about the kites, she said she was just taking pictures of them and that she would be happy to take us there. And she did, and there atop a tree were kites, all nine of them! 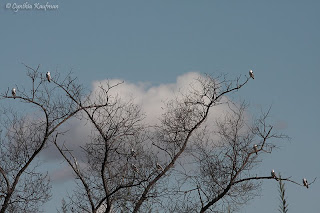 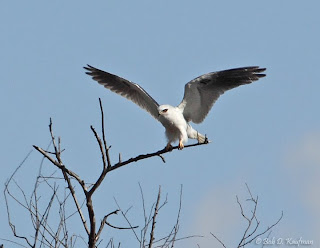 We were now batting two out of three! Our plan in looking for the Lewis Woodpecker would be after lunch, because that was the time that it had always been reported seen. After our rendezvous with the Kite family, we had a leisurely lunch at Irvine. Then off we were to the suburban neighborhood in San Gabriel. I did a drive by in this area a few days earlier after taking Cynthia to work (which was not that far from the Woodpecker site) and saw nothing. This time we parked in front of the house at 510 Del Mar and stared at the electrical post behind it. Nothing. Just a pole standing starkly against the grey skies. I decided to walk further up to get another angle. As I stood in front of the 512 Del Mar house, I saw it! The bird was behind the pole. As I walked back to get my camera, the Woodpecker decided to cooperate and showed itself in full view right in front of where we were parked. And that, as the saying goes, was icing on the cake. 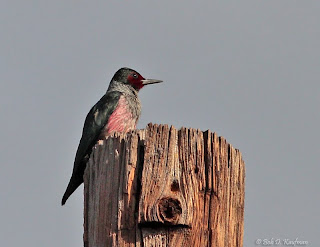 According to the encyclopedia, the word "godwit" came from the Old English words, "god" and "wihte" which means "good creature". If our experience today was any indication, the Godwit indeed lived up to it's name.

For other (more down to earth?) birding blogs and photos please visit:

Impressive and amazing!
How nice of that Lady to take you to the kites :D!

Good fortune and a great birding day Bob. Beautiful shots of the Bar-tailed Godwit (that would be a lifer for me) and the Lewis's Woodpecker and I love the shot of the juvenile White-tailed Kite with the wings spread. Was it landing or just exercising its wings?

If only every day was like that one.To get what you went looking for is amazing.

Very lucky indeed to get your 3 target birds for the day. All you northern people could see hundreds and even thousands of Bar-tailed Godwits right here - if you came down for a holiday!!!!

Wonderful to see the results of your perseverance. Three great birds!

Bob - Is there any way you could describe the location of the tree within the wilder side of Mason? I live adjacent to this park (I'm not a birder, but interest is growing) and would love to have a look at these kites. Also if you might recommend an ideal time of day. Enjoyed your blog. Best, J.T. Storey

@J.T. Coming from Culver Drive, turn to Campus Dr then left on Turtle Rock Drive, left on Hillgate. Hillgate ends at Rockview. Park on Rockview and walk down the sidewalk on the left of Hillgate. Best time is in the morning. You can also contact the Park Ranger, Shelly, and she would be glad to show you the way. Contact her at shelly.meneely@ocparks.com.
Enjoy!

Well, it took a while but I finally saw them! I'm a bit embarrassed as I live literally a stone's throw from this tree, on the very drive you referenced. Your photo and directions helped me identify the exact tree, and after several visits at various times of day, I saw three kites on Sunday afternoon. I was with my four year old son who - having made several visits already - was somewhat less impressed to see them than I. Anyhow thanks from a novice birder.