Birders and Bird photographers go to Villa Escudero for one reason. It's not because Villa Escudero is of the finest resorts in the Philippines. Or because of the sumptuous buffet that they serve by the waterfalls while the cool waters of the river flow over your feet. It is not because of the ride on a cart pulled by a carabao (water buffalo) while the local folks serenade you with Filipino ditties. Nor watching the show depicting the culture of the Philippines. Not that these are not valid reasons to go there. As a matter of fact many tourists visit Villa Escudero to enjoy all of these. But birders and bird photographers? For them the main attraction of this resort is...

...the Indigo Banded Kingfisher! Villa Escudero is the place where this uncommon endemic can be seen without fail.

Wanting to become members of the Indigo Banded Kingfisher (IBK) club - an unofficial group of bird photographers who have the image of this tiny bird in their files - my wife, myself and fellow Philippine Bird Photographer (PBP) Gabs Buluran travelled the 90 km or so to go to Villa Escudero. We have made prior arrangements with the owner, Mela Balcazar (who is also an avid birder), to let us into the resort if we arrived earlier than their official opening time of 8 am. A little after 7 am and we were already driving inside the resort and already excited as we saw birds along the way. As soon as we parked and assembled our gears, we wasted no time chasing after the various birds by the roadside. Cynthia was going after the Purple-throated Sunbirds, Gabs was shooting at a Philippine Pygmy Woodpecker. While I was still fumbling with my gear!

Soon the three of us were taking photographs of a bunch of Striated Grassbirds as they paid tribute to the rising of the sun through their melodious songs. Eventually our excitement subsided a bit and we all went to the place where the Indigo-banded Kingfisher had been seen. Regularly. We asked the staff who were doing their early morning chores where the kingfisher hangs out and they all pointed to the area in front of the rest rooms (which was facing the river - for those of you who are curious). So we waited and waited. For almost an hour we waited and .... nothing! Feeling a little bit (okay, a lot) downhearted, we went back to the roadside where we saw a lot of birds earlier. Only to discover that the avian activity had died down. Considerably. We stood there in silence, our moods shifting from bright to downright gloomy.

Then I heard one of the staff members calling me. He announced that the kingfisher was already there - in front of the rest rooms. As if our feet were on fire we quickly followed our newfound friend - which was not easy as we have to descend a zigzagging path, although concrete, was quite steep and narrow. And I still enduring bravely the pain on my left knee.

And there in all its glory was our reward! Despite the difficult lighting conditions we still tried our best to capture in digital image the uncommon endemic, Alcedo cyanopecta - the Indigo Banded Kingfisher. 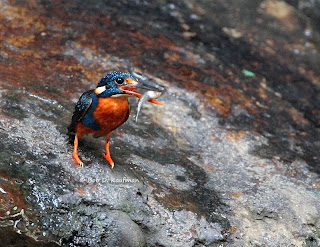 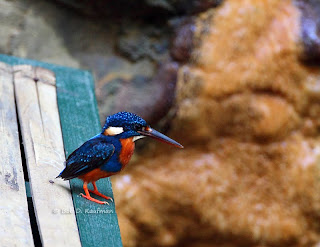 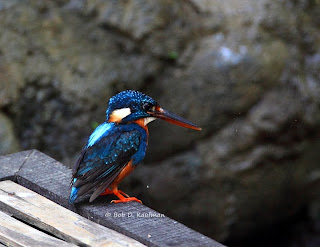 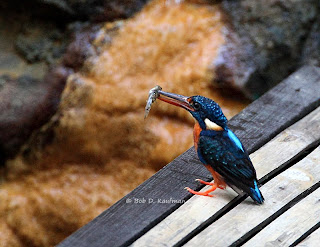 OMG Bob, what an incredibly magnificent bird! The contrast of the indigo and the rusty-orange with the white accents is truly breathtaking!

Kingfishers are one of my all time favorite birds and I must add, my nemesis bird photographically speaking.

They are so much fun to watch as they dive in the water and extract their unsuspecting prey.

You have captured this gorgeous bird beautifully.

Bob, what a cool looking kingfisher. Awesome photos and a great sighting.

I love kingfishers too but that one would have to be the loveliest I have seen! The rest of the resort sounds very interesting too. Careful - or you'll have a lot of birders want to visit you!!

WOW! That is a fabulous little bird. What beautiful colors. You are lucky to have seen one. Thanks for sharing. :)

wow. WOW! that is one good looking bird. THe photos are fantastic! I want to see this guy! So neat!

That Kingfisher is stunning!! Lucky you!
Besos desde Perú,
Mel