What happens when you go birding in a rainforest? You get rained on, that's what.

Last Thursday, on a whim, Cynthia and I decided to go to Subic Bay where patches of rainforest have remained pretty much undisturbed. Birding there, we were told, would be very productive. But then we came at the onset of the rainy season and we were showered at times by torrential downpours. They lasted for only a few minutes, but birds don't show up when the forest was being pelted by huge raindrops.

So we stayed mostly in our car even after the rain has stopped, listening to the forest come alive with birdsong. The trills and whistles were teasingly near and yet even with the aid of binoculars we couldn't locate the source of those melodious sounds.

We did see birds, many usually silhouetted against the gray skies, some as fleeting images among the dark forest undergrowth.

And we got some lifers, too! There was a tall tree where perched in sucession: a pair of Bar-bellied Cuckoo-Shrikes, a Balicassiao, a Green Imperial Pigeon (lifer!), a pair of Coletos (lifer!) and some Black-naped Orioles.

It rained less on our second day and this time we got a couple of Blue-naped Parrots (another lifer). Before we saw these parrots, we flushed a male Tarictic Hornbill which rapidly flew off into the distance and we never saw it again. On the way back to the hotel, my wife and I were discussing our frustrations at not being to get a photo of the hornbill. Just as we were passing Cubi point, I saw a huge bird perched on a limb of a tree overlooking the road. "Crow", my wife said. But I had my doubts, so I parked the car, took out my binoculars, and squealed in delight as I announced to Cynthia that this was a female Tarictic Hornbill. For the next hour or so we enjoyed the lovely treat that fate had given us that cloudy morning. 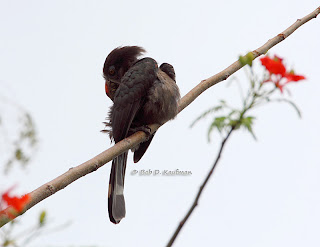 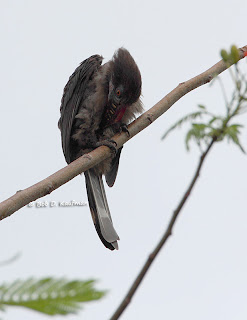 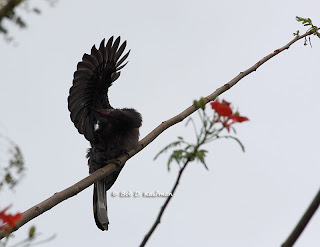 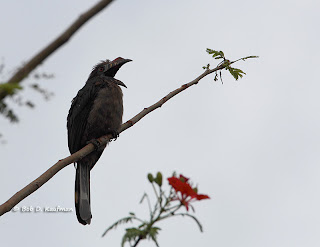 A video of the hornbill:


For other (drier?) birding blogs and photographs, please visit:

Beautiful shots of the Tarictic Hornbill Bob! The colors on the face and that red horn, very cool.

I like the shot of him preening with the wing up too. It had to be a good birding day seeing this and all the lifers, even if it was raining.

That's an impressive hornbill Bob with some nice shots to go with your list of great exotic birds.

Great sighting of the Tarictic Hornbill. Love the last photo.

Great that you got some good photos after such a frustrating time of seeing birds and not being able to photograph them. I like the music behind the video!

Love both the photos and the video of this fantastic bird. That is whats great with this challenge. To see things from far away that you would not have otherwise.

What a treat to see this bird! You really caught him well.

Great shots and sighting of the Hornbill.

that hornbill is too cool for words - wow! really, really want to see one! Sorry about the weather but sounds like you saw some excellent birds - fun!