U.P. and About Again

The recent incident in our home certainly put a damper to my birding enthusiasm. All my bird photographs since 2005 gone..just like that. So I thought a hiatus from birding (and reporting them in my blogs) would be appropriate until I have gotten over the shock resulting from that unfortunate event.
My friends, however, kept egging me to get back in the groove, so to speak. And then I got this email saying that my blog has been chosen as one of the top 30 bird-blog sites. Now how can I go on a hiatus with such support and encouragement?


Saturday morning my wife was pleasantly surprised when I told her that we will be going to the University of the Philippines (U.P.) campus in Diliman to do some... you know..birding. She hugged me like I was Lazarus coming back from death.


The first area we visited was the parking lot of the Marine Science Institute (MSI) Building hoping to find the visiting Blue Rock Thrush.  Which unfortunately was not there. Maybe the band of workers noisily paving the parking lot scared the poor bird. Now behind the MSI building was a different story. We followed the calls of the Black-naped Orioles but failed to see them too. However, the Shrikes, both Brown and Long-tailed, were bold enough to let us come reasonably close.

At the grass patch in the middle of a small circular road, a couple of Striated Grassbirds were looking for insects. 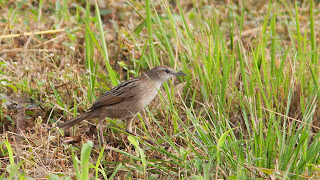 Cynthia then pointed to a black-and-white bird soaring above. I couldn't believe my eyes when I realized that it was a White-breasted Wood Swallow! I thought these birds only preferred high elevations. But when two (count 'em, two) of them perched on a bare tree I was flabbergasted! 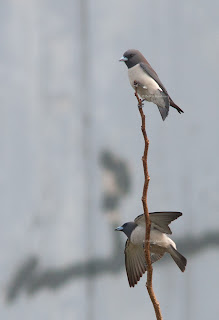 Our next stop was the "frogs" area where we saw absolutely nothing! Thankfully the Philippine Nightjar was where it usually roosted during the day near the Zoology building. 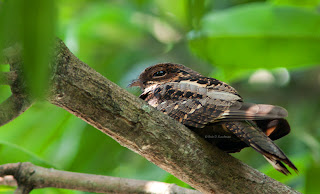 The grounds around the Tabujara school, the Vargas Museum and Human Kinetics all yielded zero birds, except for Golden-bellied Gerygones and Pied Fantails cavorting in the treetops, way too high to be photographed.

It wasn't a very birdy outing for us but at least I had a few good photographs to jumpstart my collection again. Just like a phoenix rising from the ashes of its death, I am starting to feel strength returning to my wings. Perhaps it won't be long when I'll be soaring above the storms of the past.

Bob sorry to hear about your incident and loss. What happened? I am happy that you are back out in the field as I enjoy your photography and writing. Will be back in the RP in April for a week in Negros. Keep well, Gerry