The trees were laden with fruits. There I was staring unblinkingly at the tree before me lavishly adorned with bright red fruits like an overdone holiday decor. And hoping that some other bird would be attracted to these feasts other than the noisy, ubiquitous Yellow-vented Bulbuls.
Then came a "ki-kiyaw!" So loud that even my impaired ears were able to hear it. Then came another and another, each one louder than the one before. I held my breath. Soon a flash of yellow ungracefully swooped through the green leaves and red fruits and ungainly landed on a branch. Followed by another flash of yellow. Why do they have to perch behind those twigs and bunch of leaves? I waited. Their hunger finally getting over their sense of caution, the Black-naped Orioles gave me some photo opportunities as they plucked the ripe fruits and swallowed them whole. 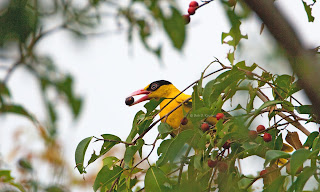 Having had their fill of these bounty, the orioles left. Only to be replaced by a group of Coppersmith Barbets. 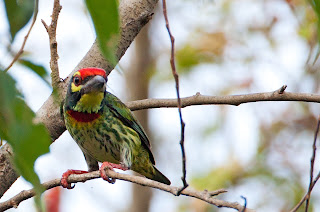 When once again only the Bulbuls were the only ones enjoying the fruits, I started walking back to my car. It was then that my friend and fellow bird photographer, Ralf Nabong, arrived. It was also then that the Philippine Hawk Cuckoo flushed from somewhere and alit on a branch not too far from us. I managed to get off one quick shot while Ralf struggled to assemble his gear. Just as soon as he was ready, the cuckoo flew to an acacia tree. We quickly gave chase but it flew again from tree to tree not allowing us to get a good look at it until the bird flew to where we would not be able to follow.
After calming down our frustrations, Ralf and I decided to go to where the Lowland White-eyes are found. As we approached the fruiting "alagaw" tree, I immediately saw the roosting Philippine Nightjar on the branch of a nearby tall acacia. 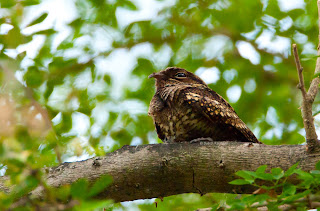 Turning our attention to the "alagaw" tree, we met another fellow bird photographer, Rey Sta. Ana. As always the fruiting tree was swarming with Yellow-vented Bulbuls. Once in a while a flock of Lowland White-eyes would fly in to feed on the fruits. All three of us enjoyed the challenge of photographing these constantly moving, tiny green birds that blend so well with the large alagaw leaves. 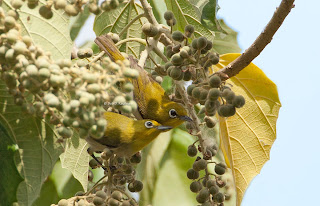 At around eleven, Ralf had to leave due to some personal duties. Rey and I went back to the cuckoo place but it was nowhere to be found so we too decided to call it a day.
Later that afternoon as I related to my wife our adventures that morning, she asked, "Are y'all happy?"
"Oriolelly am", I replied
Posted by Bob Kaufman at 5:01 PM

no wonder those birds looks all too familiar to me, birding Malaysia soon?

Great shot of the nightjar!

Great shots !!! Thanks for uploadng those awesome photos, including the Alagaw fruits.