Yellow-vented Bulbuls are so common here in the Philippines that very often they no longer get the attention of birders. A birder sees one (or two, or more) and the usual reaction is "ho hum, just another YVB". (Filipinos have this habit of shortening names and that applies to birds, too, more so with bulbuls because in Tagalog "bulbul" refers to an unmentionable part of a human being. Therefore one does not go around yelling "bulbul" when one sees this species especially if there are other non-birding Filipinos around).

It was not very birdy this particular Saturday morning at my favorite hang-out, the University of the Philippines' campus in Quezon City. The Black-naped Orioles were a-calling but they were not a-landing on the fruit laden tree in front of me. The only birds enjoying the fruitful bounty were "ho hum, just another YVB". Lots of them, actually.
So I decided to make lemonade out of the lemons I was given by photographing the antics of these ever present brown birds, capturing their images as they gobbled up the abundant fruit. 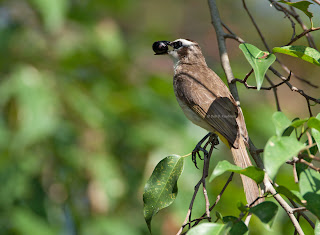 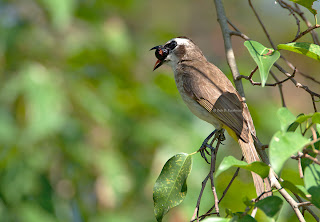 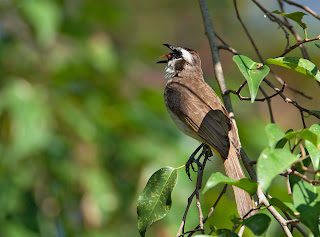 It was a good thing that I was at some distance from this tree. Otherwise I probably would have been the recipient of some Bulbul s*** (er, droppings).
Posted by Bob Kaufman at 1:34 PM