In my previous blog (the one I didn't want to write) I lamented the fact that my wife and I missed the Scaly Thrush at La Mesa Ecopark three times! With the encouragement of our friends, Cynthia and I decided to give it one more try. At first my wife refused to do it, reasoning that she probably would not be able to handle another heartbreak. I actually had the same thoughts. When our friend Irene texted Cynthia telling her that she and Rob would be going to the Ecopark on Friday morning and help us find the now seemingly imaginary bird, how could we refuse.

It was drizzling as we left our house. A dawdling breakfast at Jollibee's and the drizzle hasn't stopped yet. At the Ecopark we walked towards the mini forest under an umbrella. Close to an hour of scouring the leaf litter drenched in rain water not a single creature was seen stirring and our hearts were silently breaking. Then Cynthia's mobile phone tweedled, it was a text message from Irene. Rare bittern at spillway it said. My wife relayed the message to me. Rare bittern? what could be rarer than a Schrencks, I thought to myself.

"Ask her what kind" I told my wife.

A few minutes later, another message.

The news confirmed my suspicion. My wife and I looked at each other. The way our luck had been going lately we feared that the rare bittern will be gone by the time we had negotiated the long uphill walk to the spillway.

We continued peering into the dripping understory. Still not a creature was stirring, not even those pesky mosquitoes that had been the bane of birders in this dark, melancholic place.

Heaving a mournful sigh, we began the trek to where our friends were wallowing in the thrill of getting another lifer. Out of breath and out of hope we approached the deck overlooking the spillway. Rob told me to look through his spotting scope. I looked and saw nothing but a rock.

"It's there!" both Irene and Rob insisted. Cynthia and I went to the lower deck and scanned the shrubbery. There were some Barred Rails in the distance and as I used them to console myself, Rob suddenly yelled, "Flying! Flying!" I looked and saw something browny-orangey dive into a clump of tall grass.

"I saw it!" I replied to one in particular still unconvinced that it was indeed the Schrenck's Bittern that I just saw. Time slowly passed and the skies blew away the rain and welcomed a bright morning sun. When I saw a Little Egret walk towards the place where the flying bittern landed, I told my wife who was standing next to me, "Look, God sent that Little Egret to flush the bittern so we can see it." A few minutes later the rare bird emerged from its hiding and gave all four of us such good looks that there was no denying that this was indeed a Schrenck's Bittern! 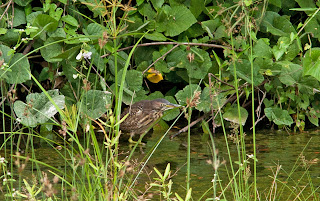 Once that fact had been established, text messages were immediately sent to our friends. Soon we were joined by Bram and then Jun and Maia. To their delight the bittern remained visible and so insouciant to its now celebrity status.

Thanks to a bird whose scientific name means harmonious bittern, the heartaches dealt by a scaly creature had been turned to a tuneful melody of joy.
Posted by Bob Kaufman at 3:54 PM