This day we get to explore the Rainforest Discovery Center (RDC), a prime birding place in Sabah, Borneo. We were as excited as children about to go to Disneyland for the first time.

At six in the morning as we waited for the van to take us there we discovered graciousness.

Actually it started yesterday. While we were having a late breakfast at the Banana Café (the house restaurant of the Sepilok Jungle Resort where we were staying) a group of American birders joined us. With them was their tour guide Susan Myers, the famous author of the book “Birds of Borneo”. She approached us and we got into a cordial conversation with her. As they were about to resume their birding activities (which will be at the RDC) she graciously offered to take us along. However, since we still have not checked-in yet and my camera gear were still tucked inside our luggage, we had to decline her offer.

This morning, Susan and her group were going back to RDC. Once again, she offered to take us along. However we had already arranged for van to take us there so we had to turn her down again. We also felt that it would be unfair to the members of her tour group who very likely paid thousands of dollars if we joined them and not pay a single cent (which I’m certain that Susan would not ask from us).

We discovered as we were traversing the Canopy Walkway at the RDC that the birds were not as plentiful as we had expected. Perhaps it was the time of day or the intense humidity even at half-past six in the morning. We did get our first lifer of the day though. An immature Red-bearded Bee-eater. (Another discovery we had in this trip was that many of the birds we saw were still in their juvenile stage.) 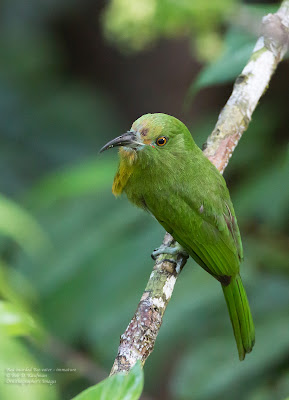 We discovered the hard way that today was a Malaysian holiday. We were sort of taken aback when several school busses unloaded hordes of noisy school children who immediately went up the Canopy Walkway! Of course, where there were boisterous kids, there were very, very few birds to be seen.

While lounging at the restaurant (a total misnomer because they don’t serve any food, only soft drinks, bottled water and ice cream – at horrendous prices even) we met Wonder Boys. Brothers Armao and Joao Pedroque, ages 9 and 7 respectively, were avid birders. They (along with their Mom and Dad and younger sister) were natives of Catalan, Spain and had been travelling all over Southeast Asia just looking for birds.

After “lunch” Cynthia and I explored the trails. While catching our breath at a place appropriately named Birders Rest, we heard some squawks and several huge birds flew in. I thought they were just the “usual” Oriental Pied Hornbills but when I looked through my lens they definitely looked different. They were Bushy-crested Hornbills! (Whoever named these birds must have a very vivid imagination.) 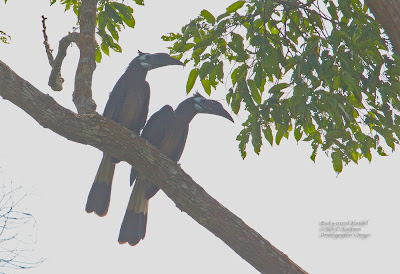 At two in the afternoon, things began to quiet down a little as most of the visitors have already left. We returned to the Walkway only to be greeted by Armao who came running towards us and in an excited tone told us that he just saw the Bornean Bristlehead about 20 minutes ago.  The adrenaline rush took over my fatigue as I sprinted up about 4 stories high into the aptly named Bristlehead Tower. Elizabeth, Armao’s mother was already there and announced that the rare endemic was already gone.

We waited with the hopes that the Bristlehead would return. Occasionally, we would wander around just to shake off the oncoming ennui. It was during one these wanderings that I saw another lifer. Another immature bird whose identification escaped me. It was only when we were back home and after processing the photo that I was able to find out what kind of bird it was – thanks to Steve Pryor and our friend, Irene. It was a Blue-eared Barbet. Another lifer for us. 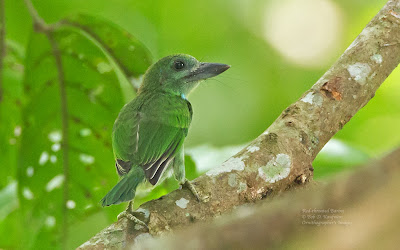 We gave up on the Bristlehead and as we were exiting the Canopy Walkway, we got another lifer, the Hairy-backed Bulbul (again an interesting name given by someone whose imagination had gone wild). 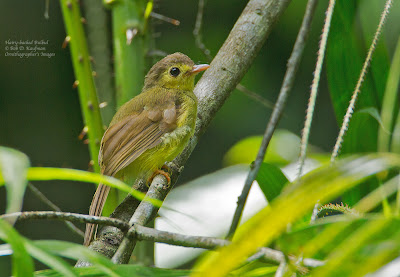 As we waited for the van to take us back to our hotel, we discovered that the flowering plants lining the street were host to some beautiful birds. Among them were the dark-colored Copper-throated Sunbirds. 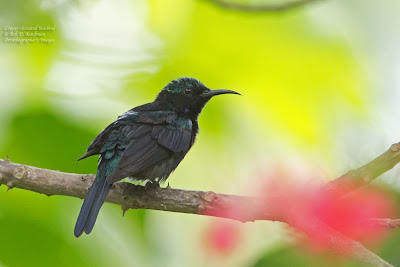 That night my wife and I discovered that we no longer had the energy to do some night birding. As if to confirm our decision, it rained.
Posted by Bob Kaufman at 2:22 PM