Yes, No, and Not Yet

The dark gloomy skies of my recent heartbreaking experiences (see my previous blogs) continued to darken whatever enthusiasm I have for bird photography. The most recent one was our failure to see the migrant Chestnut-cheeked Starlings at the premises of the Avilon Zoo. Those birds were seen and photographed the before we came. The day after our visit, friends were once again able to capture the images of those starlings. I was in that kind of funk when I got a PM Thursday night from Mhark Gee, the guide at Avilon. He said that the starlings were now in a different area, are more plentiful, and can easily be seen as they feed on the fruits of the ficus tree. I took a deep breath, murmured a silent prayer and then consulted my wife. Cynthia agreed to go the next day. I quickly replied to Mhark telling him that we will try our luck again.

Friday morning we were at Avilon even before they opened. A little before 8 am, Mhark came and took us to the "site". He pointed at the ficus tree and assured me that our target birds will soon be there. After a few minutes, a female appeared, at some distance, and behind some leaves. Again, Mhark gave us the assurance that they will come closer and more in the open. After about an hour that seemed like an eternity, the female once again appeared, and as our friend said, was out in the open. 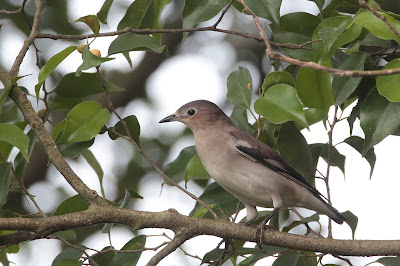 Then came a few boisterous Crested Mynas that caused the shy starlings to lie low for a while. 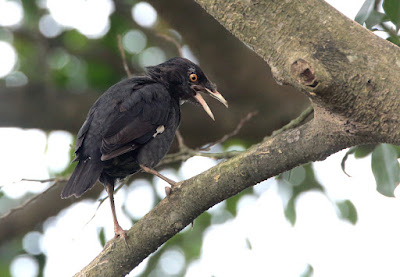 After the Mynas left, the emboldened Chestnut-cheeked birds continued their feeding on the red fruits. This time we were able to capture the image of the more colorful male. 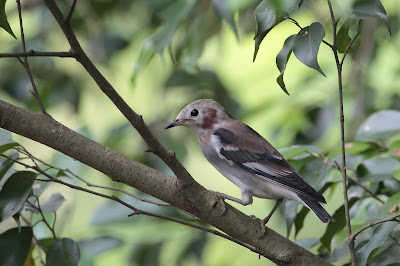 Elated that we had finally overcame the pall of gloom over my bird photography, we consented to Mhark's suggestion that we look for the other "stars" of this place: the Spotted Wood Kingfisher and the Indigo Banded Kingfisher. We did see "Spotty" but it was partly covered and in a dark area and Indigo was a no-show. Although we missed both, it was not a disappointment for us since we already had good photos of the two species of kingfishers.

Around 11 am, we said goodbye to our friend and thanked him profusely for helping us - me, more so - to get over my miseries.

Spurred by the apparent turn of events, Cynthia and I agreed to re-visit the Infanta road the next day. It was drizzling when we left the house early Saturday morning. It even poured hard as we were having breakfast at Pico de Pino in Tanay. Eventually, the skies cleared up a bit when we reached our destination. There were moments when mist covered the hillside where the birds usually frolic. However, despite the help of friends Tonji and Sylvia, our target species - the Olive-backed Flowerpecker once again failed to appear. It was deja vu as none of our hoped for lifer still remained unticked in our list. It wasn't a complete disaster because thanks to another friend, Anthony, we saw a Changeable Hawk-Eagle high up on the hillside. This was the first sighting of this species in this area, as far as we know.

As we endured the horrendous traffic going home, I remembered one of the preachings I heard at Victory Ortigas. The Pastor said that God answers our prayers in three different ways: Yes, No, and Not Yet. To me that explained the experiences I had the past couple of months. My heart is now at peace.
Posted by Bob Kaufman at 3:05 PM