We woke up late Saturday, Nov. 12th. It was one of those lazy, dazy, days of autumn. Not having a definite birding destination planned, we agreed to go to Sepulveda Basin Wildlife Reserve which is only about 25 miles away and always a sure place to see birds. Besides there had been sightings of a Blackburnian Warbler in its vicinity. That, of course, was incentive enough to visit the place.

We were just getting off the car when we saw the squadron-like formation of American White Pelicans slowly descending in the distance. We decided to carry both cameras; Cynthia handling the smaller and lighter 300mm lens while I lugged the humongous 500mm. When we reached the first lakeside lookout point, we witnessed the cooperative behavior of the White Pelicans. Several birds would herd the fish with a lot of wing beating and water splashing like a bunch of white clad cowboys. As soon as they have their quarry trapped between them, then the feeding frenzy begins. They were doing this at less than twenty feet away from the curious onlookers – birders, photographers (and a combination thereof), families with young kids, artists (there were a group of painters nearby who left their masterpieces just to witness the pelican’s behavior). Adding to this was an Osprey who did its own way of catching fish…flying about 50 feet above the waters and then suddenly swooping down and plunging into the lake, then rising up with an explosion of water oftentimes with a fish in its talons. All these commotion didn’t appear to bother the grebes and cormorants who just continued on with their respective businesses.

After a while we left to continue our search for the warbler. We did not have high expectations of seeing this bird because the directions given were not clear enough and a search party the day before did not find it either. Meandering along the trailway, we were surprised at the volume of people that we encountered. This must be “Take-your-child-birding” day. We met wave upon wave of adults guiding small children with tiny binoculars hanging from their cute little necks.

We eventually came into a place where there were no children (perhaps it was because the day was starting to heat up). We saw the usual suspects – birds that we see often enough. Cynthia practiced on her photographic style while I did some half-hearted shots. It was then that I witnessed something white on top of a leafless tree. It gleamed as the mid-morning sun shone upon its white feathers. I immediately looked at it through my binoculars and confirmed what I had hoped I would see – a White-tailed Kite! I pointed out the bird to Cynthia who wasted no time taking its picture. I, on the other hand, and with the stealth of a hungry tiger, inched closer while clicking away with my camera at my magnificent prey. 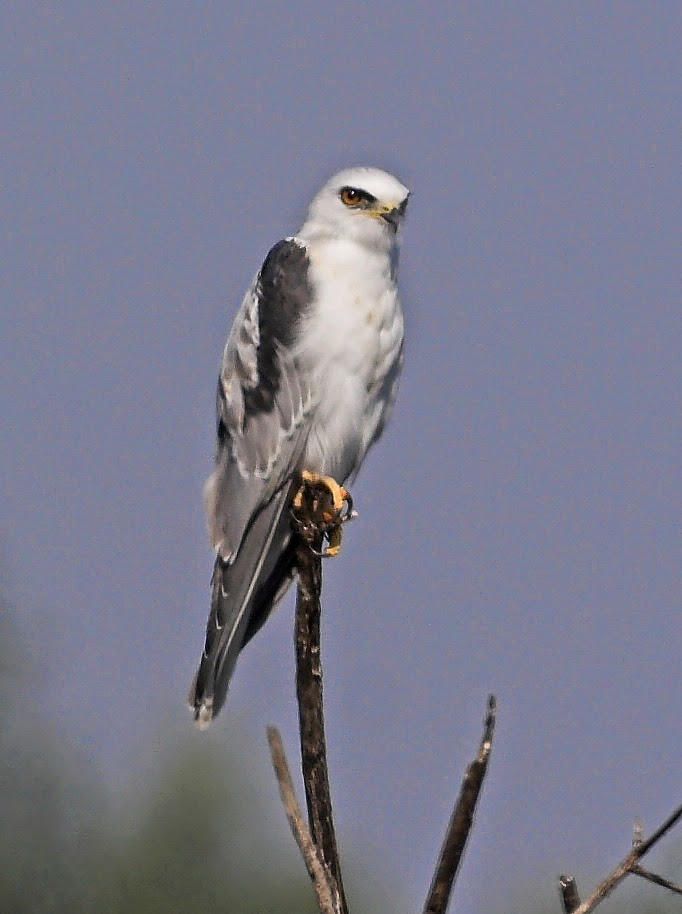 At about 50 feet away, the red eyes of the white raptor caught the movement of this strange object crouching in the tall grass and holding what looked like a big coffee can, and decided to fly away to an area devoid of weird creeping, hat-wearing creatures.

On the way back, although a bit anti-climactic, I got some good pictures of a friendly Western Kingbird. 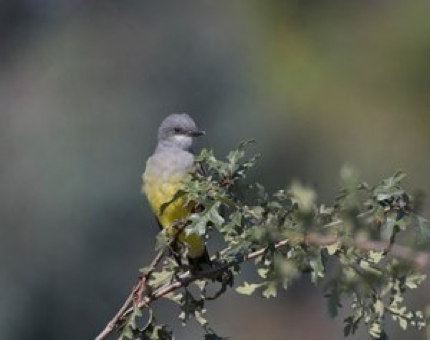 The Pelicans were still having a piscine party, the Osprey was still plunging into the water to catch its meal. Hmm, it is almost noon…fish seemed like a good idea for lunch.