The Hunt for the Red Celebrity

He was on the front page of a local newspaper (one of those broadsheets published by a city that has a total subscription of less than 10,000). Somehow, the local network television editors picked up the story and on the 6 o’clock news on Friday, November 4, 2005, “Rudy”, the Painted Redstart, became an instant celebrity.

I have read about the then relatively unknown warbler a few days earlier in the Los Angeles Birding Yahoo group. It was found near Restroom # 8 not too far from the entrance to the Frank G. Bonelli Regional Park. Admittedly, the Painted Redstart is an uncommon bird in southern California, its normal range being in Arizona all the way to Texas and northern Mexico. Uncommon, yes, but not that rare. Actually, this species had also been observed within the premises of the San Diego Zoo and another one was seen at the Elysian Park in Los Angeles just last week. There had been instances of sightings of much rarer birds (the Tundra Swan, for example) but none got the media attention that Rudy had.

And so it was with some feelings of trepidation (What if all media attention scared the bird away? What if there will be a circus of onlookers at Bonelli?) that we embarked on the hunt for this red celebrity that early Saturday morning of November 6, 2005. As we approached restroom # 8, I sighed a sigh of relief noting that the place was almost devoid of people! Only one birder was there and he was quite a distance up the road. As soon as I got off the car, I looked at the oak tree where Rudy was seen by the entire population of the greater Los Angeles area the night before (albeit in their boob tubes), and there he was, flitting among the leaves and working for his breakfast. I immediately set up my camera gear and started shooting away at the cooperative celebrity. 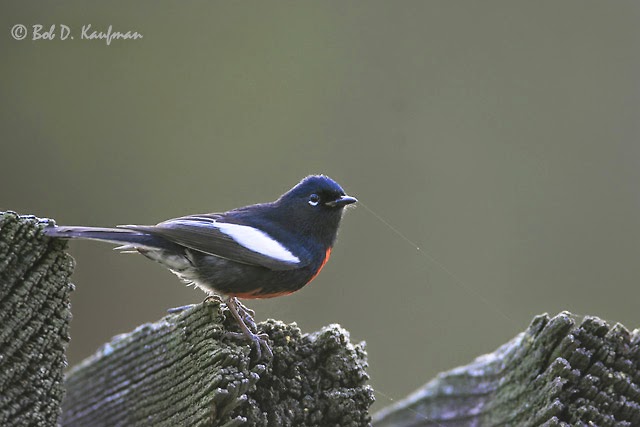 Occasionally, it would fly off across the street and then come back a few minutes later. That was the time another colorful bird, the Red-breasted Sapsucker would come and start drilling the trunk of the oak tree to eat the sap that would ooze out. The sap was probably sweet as it attracted a lot of insects. These insects in turn attract Rudy who feasted upon them every opportunity that he got. 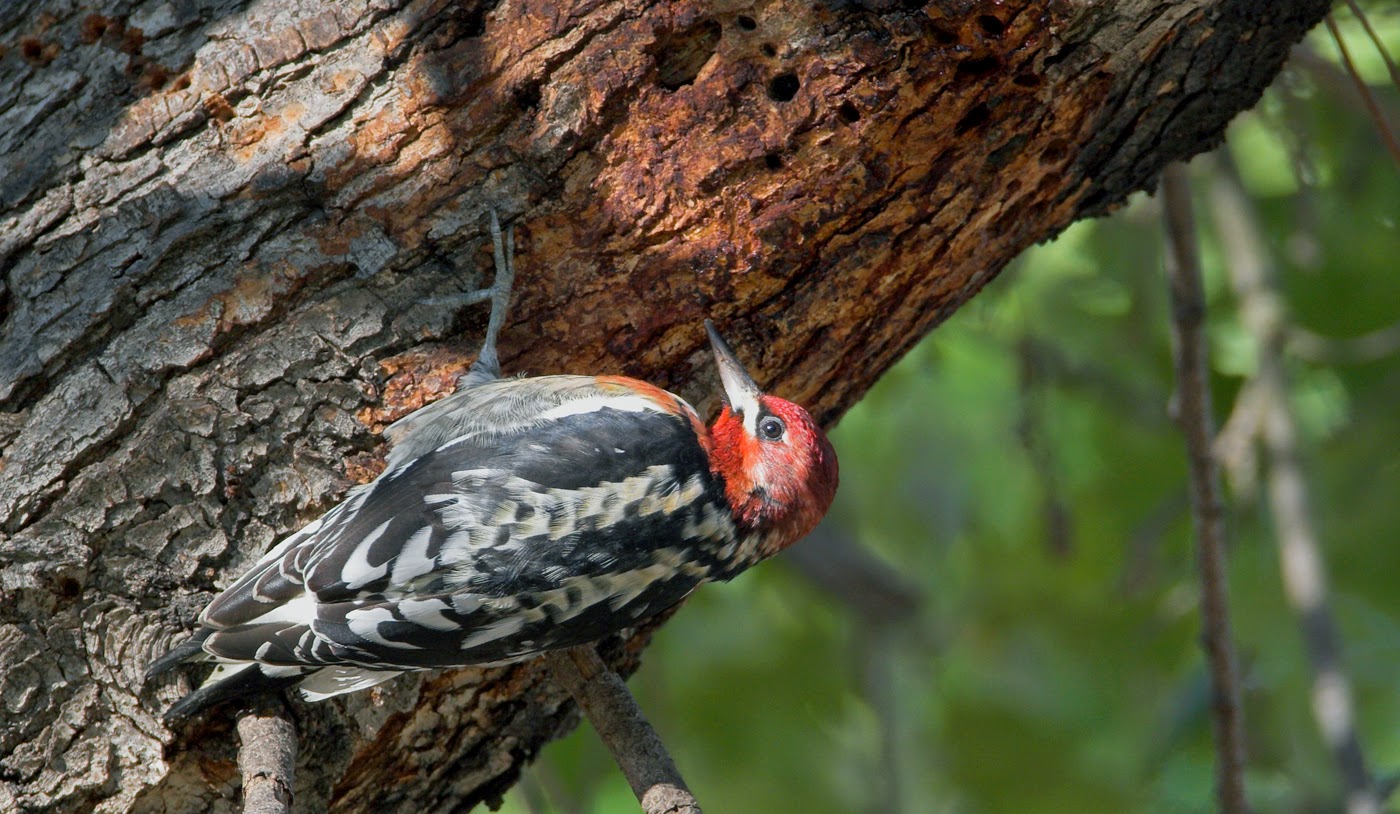 After a while we moved on to explore the other areas of the park, particularly those close to the lake hoping we would see a Belted Kingfisher or two. We found a group of birders looking up a tall fir tree. “Barn Owl”, one of them informed us. I looked up and there, 30 feet up, was an owl doing what it does during the day – sleeping. No amount of commotion below would rouse it from its deep slumber. Well, a Barn Owl, awake or not, was still a lifer for me. 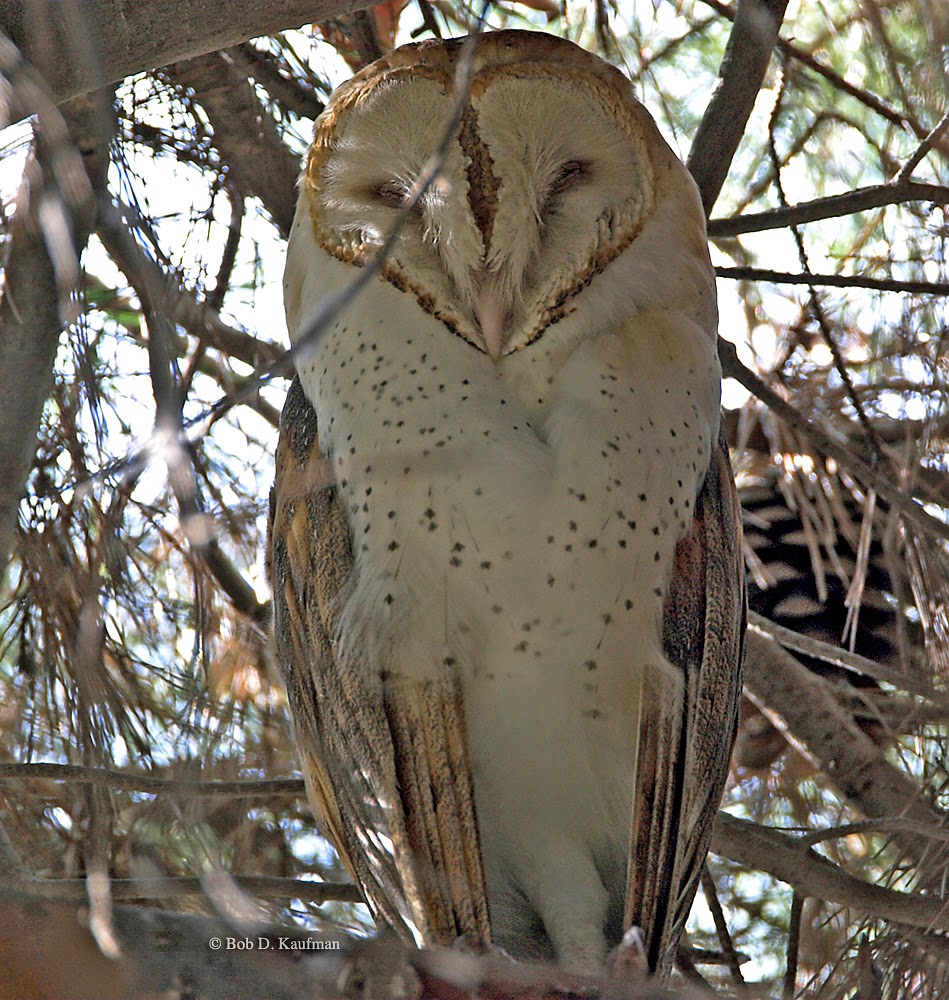 Walking along the lake, we saw the usual coots and mallards, several grebes, both Pied-billed and Western. An Osprey made a fly over. A lone Spotted Sandpiper bobbed its behind continously as it foraged for small insects in the mud. A couple of joggers told us they saw kingfishers (note the plural) in the area where the road ends. We found the area and the kingfishers (there were two of them) but both were so flighty that I was unable to get any picture at all.

We returned to Rudy’s domain where now there were photographers with huge lenses. Of course, the Painted Redstart was still there, oblivious of its newly acquired celebrity status. After some shop talk with the onlookers, we decided to call it a day and rest on our laurels (read: 2 lifers!).
Posted by Bob Kaufman at 12:56 PM