We Came to Playa

The gloomy skies of the past week gave way to the bright sunny Saturday of October 29. We dropped off Cynthia’s nephew and niece at Universal Studios around 9:30 am and from there proceeded to Playa de Rey. Surprisingly, traffic was light (the 405 is notorious for its nerve-wracking traffic jams) and we arrived at the Playa del Rey lagoon just about 10 am. Despite the drizzles we had the past week, the water at the lagoon was low and there were only a few birds around – most of them Snowy Egrets and Mallard Ducks. Or so we thought.

We decided to head for the beach which was just across the steet from the lagoon. At this point, I purposely did not bring my camera gear yet as we wanted to survey the area first and see if we would be able to find our target bird for the day – the Black Oystercatcher. About a month ago, famous bird photographer Bob Steele posted a picture of this bird that he took from the very same location that we are now. Although the Black Oystercatcher is not an uncommon bird in winter along California beaches, I still wanted to get a picture of this enchanting shorebird.

We walked along the sandy beach and saw nothing but Willets and the usual gulls. We moved on to the area where the Los Angeles river flowed into the Pacific Ocean. Slowly we traversed an elevated breakwater that separates the river from a cove. There were a lot of birds here – huddled and most of them asleep close to the water’s edge making them quite difficult to observe from our lookout point. There were Willets again (hundreds of them!), some Marbled Godwits, and a smattering of Gulls (mostly Western), but no Oystercatchers.

Finally, having explored the area for more than an hour, we grudgingly walked back to the parking area by the lagoon and re-draw our birding plans. We walked over to the restrooms and while waiting for Cynthia, a lady who was getting out of her car asked me if am a birder (with a pair of binoculars hanging from my neck, I thought that was quite obvious).

“Are you getting ready to leave?”, she asked.

“Because I will be going over to the breakwater and do some birding. Maybe I can help you find some birds.”

My face lit up as if a huge spotlight was suddenly shone upon it. As soon as Cynthia emerged from the restroom, I relayed to her the good news. I immediately hauled out my camera equipment while Cynthia engaged the lady (her name is Barbara Johnson) in a very intense avian conversation. Even before we left that morning, Cynthia and I prayed that we will be able to see our target bird for today. And now, just as we are about to give up, the Lord answered our prayers by sending us Barbara who turned out to be the guide who will be leading a birding tour here at Playa del Rey tomorrow.

First, Barbara led us around the lagoon and pointed to several gray birds feeding on the murky water’s edge. “Dunlins”, she said, “among the Short-billed Dowitchers”.  Now Cynthia and I had seen this group before and I even identified the dowitcher’s correctly, but for the life of me, I never noticed the Dunlins despite the obvious difference in size. After showing us two pairs of Greater Scaups she then asked us if we saw the White-fronted Goose. I said we saw a group of geese earlier and I just thought they were just the very common Graylags. She scoped the banks on the other side of the lagoon and as she pointed to the smaller of the four geese sleeping there, she said, “That small one is the White-fronted. It has been with us since last year.”  Since the geese were all taking their siesta which means their heads were tucked under their wings, I couldn’t confirm the information that Barbara just told us. Then, as if on cue, the small goose looked up and showed the tell-tale mark that gave it its name.  I just got a lifer that very moment.

The three of us then proceeded to the breakwater in the opposite direction of where we originally went. Cynthia and I didn’t think of going that way because we saw several fishermen there and we thought there couldn’t be any birds where there are people. Even as we approached the breakwater, Barbara was already pointing out birds – “There’s a Black-bellied Plover, that is a Western Gull, those are Double-crested Cormorants.”

A few feet into the breakwater, and not too far down were a flock of Surfbirds. This was the first time we’ve seen them this close and this many. 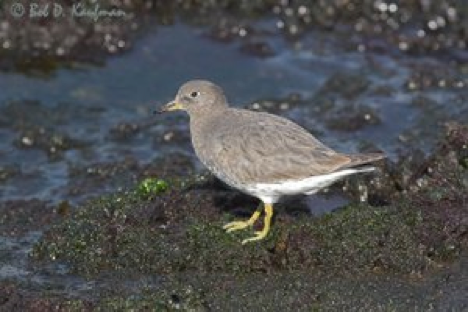 At the other side of the jetty were some Sanderlings, Least Sandpipers, more Surfbirds and Black Turnstones (alas, no Ruddy Turnstones). Barbara Johnson exclaimed that we were looking at 4 species of birds in just one tiny spot. Whimbrels were in there, too, watching us warily. All of a sudden, Barbara started yelling, “Black..uh..mm…O-o-oys…mm..uh, Ah..ah…” I knew right away what she meant and true enough, the black bird with the red bill stood prominently among the drab gray of the Surfbirds. Such is the striking beauty of this species that it made even a seasoned veteran like Barbara stutter. 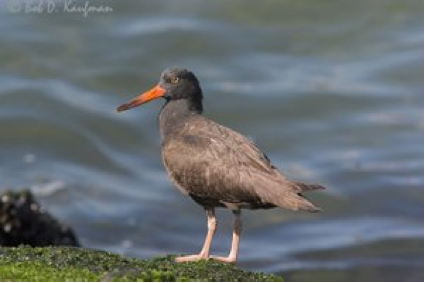 Satisfied that she had done her job, Barbara bade goodbye. We tarried for a while enjoying the Oystercatcher and other shorebirds up close. Soon it was time for lunch. We purposed to go the Ballona Creek after eating but our search for a place to dine brought us to Burger King in Van Nuys which was quite a distance away. We tried the MacDonalds near Playa del Rey but when we saw some unsavory looking characters hanging near the parking lot and with about $10,000.00 worth of camera equipment in the trunk of the car, we decided to look for a “safer” place. We also tried the Westwood/UCLA area but couldn’t find a place to park despite our numerous attempts!

From Burger King we went to one of our favorite birding grounds, the Sepulveda Wildlife Reserve. We have always good sightings here and today was not going to be an exception. Almost as soon as we entered the reserve I spotted a raptor perched on a tree close to the lake. It looked like a Kestrel but had darker plumage. I smiled as I came closer (while taking photographs) and discovered that it was a Merlin, a somewhat uncommon bird in Southern California. 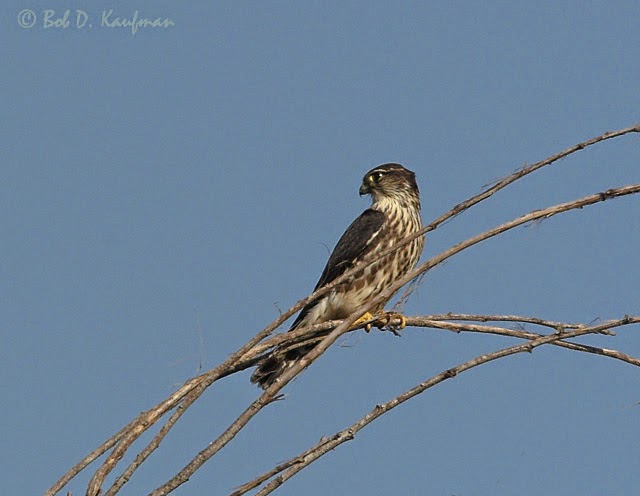 The reeds along the lake had its usual denizens of egrets (Snowy and Great), herons (Great Blue and Black-crowned Night), Mallards, Coots and Pied-billed Grebes. There were even a couple of Ospreys and a Belted Kingfisher flew by. By the meadows we saw the dark-colored Merlin again this time actively competing against the glorious white of the White-tailed Kite. Two beautiful raptors hovering, gliding against the backdrop of the setting sun. This was an image that is etched into the heart of every birder.

The sun started its slow descent to the horizon and as we were basking in its warm glow and relishing the beautiful birds that we saw today, our semi rapturous state was interrupted by the ring from my cellphone. Cynthia’s nephew and niece finished their adventure at Universal Studios and are ready to go home. And so were we.