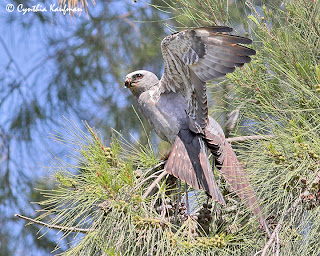 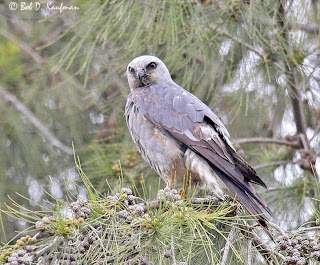 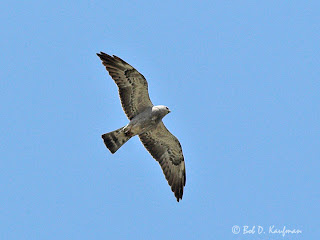 This was the second week in a row that we went to photograph a bird that is quite rare in Southern California. As its name implies, the Mississippi Kite is a raptor that is rather common in the southeastern part of the United States. It is very seldom found west of Texas. So when news came out that there is one such bird inhabiting the South Coast Botanic Garden (SCBG) in Palos Verdes, we decided to check it out, hoping that we still carry the same amount of luck when we saw and photographed the Bay-breasted Warbler (another rare vagrant from the east) in Orange County last Monday.


As we entered SCBG, we noticed that there was an entrance fee: $7 per person. Per person??!! Tightwads that we are, we were quite taken aback by that price. But then, a rare bird is a rare bird, and a paltry sum of $14 should not stop any enthusiastic bird photographer like us.


The gardens were beautiful with different kinds of flowers blooming everywhere! From the directions given us by the park volunteer, we realized that the kite was holding fort at the far end of the park. This was one of those times I was glad I didn't bring my heavy artillery along. We were both panting when we saw a group of birders/photographers already enjoying the sight of our visitor from the east. The skies were downright gloomy, but our subject was very cooperative, perched on a limb of a "she-oak" tree and staring back at a bunch of humans below. Everybody with a camera (even if it was only a point-and-shoot model) took pictures of the bird to our hearts content. Among them was Steve Wolfe, the person who "discovered" the Mississippi Kite, with his Pentax and Bigma combo.

By the way, on our way to where the kite was, we noticed a lot of hummingbirds, mostly Allens, enjoying the bounty of flowers. Cynthia said that as soon as we're done shooting the Mississippi Kite we'll return to the flower beds and shoot the hummers. It turned out that that afternoon, there was a wedding at the park and guess where all guests congregated? Cynthia was quite disappointed, to say the least.


Anyhow, at lunchtime we left the SCBG to satisfy our hunger. Jack-in-the-Box was our restaurant of choice. Did I say we were tightwads? Tummies filled, we returned to the garden, having been assured earlier that we don't have to pay the entrance fee again just as long as we showed our receipt.

This time the sun was shining in its full glory. As we approached our destination, we noticed that the birders were all looking up in the sky. We followed their lead and soon enough we saw our bird, flying effortlessly above us, even putting on some breathtaking aerial maneuvers, just to impress us earthbound creatures. After a while it alighted back to the tree where we saw it the first time that morning. Again, with better lighting conditions, we started shooting till our arms tired. The highlight of the day was when the kite made a short sally and came back with a green beetle in its mouth. It then proceeded to dismember the poor insect. The raptor had its lunch in front of a thrilled audience. Thank goodness there weren't any entomologists among us.
At around 3 pm, we decided to call it a day. Our luck held and our adventure with the Mississippi Kite was well worth the $14 we shelled out to see it.


Did I say we were tightwads?