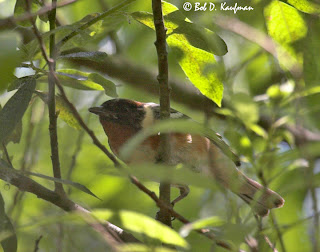 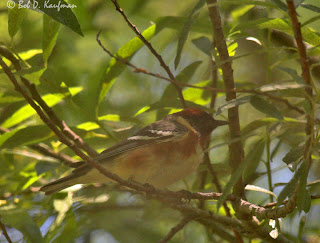 Today, Memorial Day, we had a singular purpose: to find, and hopefully, to photograph, the Bay-breasted Warbler seen yesterday at the Sea Gate Park in Huntington Beach.

We arrived at the park around 8:30 am. There were several birders there and as we approached them there was a shout of "there it is!" and we all rushed to where the announcement came from. This was not an easy task because to get to the location of the bird, we had to descend a steep and slippery (the sprinkler was just turned off just as we were about to go down) slope. I almost gave up the chase since I was carrying my 500mm + tripod combo. But a big thanks to Rusty who helped me and my gear get down without damaging me or my equipment. The place where the warbler was hanging out was such that it made my camera/lens/tripod combo useless. It was muddy and trees and second growth plants were all around. Add to that eight birders all eager to get a glimpse of our valued quarry. I saw the bird - a short glimpse - not long enough to even tell that it was indeed the Bay-breasted. In a few minutes, the bird was gone and the birders trickled out of the park, leaving us somewhat disappointed.

We lingered at the park for a little while longer and when Cynthia noticed my unease, she suggested a visit to Bolsa Chica. "We'll come back later after lunch", she said, "Anyway, it was around that time that it was seen yesterday."

And so we went to Bolsa Chica where we tried (and failed) to get flight shots of terns. After lunch, we went back to Sea Gate Park. Before long, Sandy and Tina (?) arrived and started staking out the elusive warbler. We thought we would give the place where we first saw the Bay-breasted another try - (Sandy was on the other side of the park) - but totally dipped there.


On our way back, Leigh and Peter called from the top of the "ravine" and asked how to get to where we were. We gave them directions and as we were resting from our "climb", we heard Tina yelling, "We got the bird! We got the bird!" The only reaction to expect from a birder after hearing those words is to run like heck to the source of the shouting. So we ran. I have switched to my much lighter 100-400 lens and I arrived at where Sandy, Tina, Leigh and Peter were in nothing flat. This time we had better looks at the lovely warbler. I had my pictures but then in my excitement I forgot to make the proper adjustments to consider the lighting conditions and the mobility and habitat of my subject. aaaarrrrrgggghhh!

Nevertheless, Memorial day has a new meaning for Cynthia and I as we both got our lifer.
Posted by Bob Kaufman at 9:18 AM

in bird talk, when you say "lifer" what does it mean? once in a life time deal? pardon my ignorance..