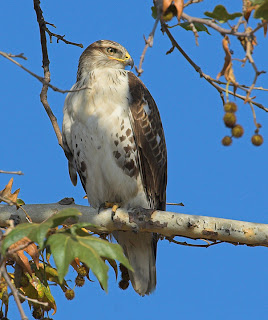 It was a beautiful sunny morning last Saturday - a perfect day for bird photography. But gasoline prices had gone higher and even worse, I was feeling a little bit under the weather. My birding spirit prevailed over this dilemma primarily because there was allegedly a Ferruginous Hawk (Buteo regalis) sighted at Peck's Pit. Peck's Pit was close enough that it would not create a huge dent in my gasoline budget and the weather was nice enough that my cold would not get aggravated. Besides birding experts are still not in complete agreement as to whether this was really a Ferruginous inasmuch as it is way off its normal habitat and I wanted to help - hopefully through photographs - confirm its identity.

We saw a couple of birders as we got off the Jeep. They informed us that they saw the hawk but they thought it was just a young Red-tailed - a very common species. They also said the bird flew across the lake and thought that it would probably go back to the school compound where it was first seen. Undaunted by this not so encouraging news, my wife and I proceeded towards the lake resigned at just photographing the usual denizens of the park. Just then I noticed a raptor flying in from the lake.

"There it is!" I yelled and sprinted after it, Cynthia following right behind me. It landed on top of a tall sycamore and we moved slowly to get a better view. We spent about half an hour taking photographs despite the distance and the elevation of our subject. Eventually the hawk flew and we thought that that was the end of it. But then it decided to perch on a lower branch of another tree a few feet from where it was! This time we got terrific views of the raptor as it sat there, less than 50 feet away! Without a doubt, this is a Ferruginous Hawk, albeit a juvenile one.

At home, as I was downloading our photographs, I realized that we took almost 200 shots of just one species of bird. With the exception of a couple of shots of a Red-tailed Hawk (which we took just so we can compare it with the Ferruginous), we did not take any picture of any other bird that day.

The Ferruginous Hawk certainly deserved to be the bird of the day.
Posted by Bob Kaufman at 11:20 AM