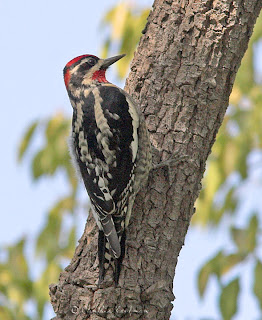 The weather was nice Friday so we thought we'd try again for the Bay-breasted Warbler at Whittier Narrows. And hopefully see the Canvasback (which I missed twice before) this time. Let me just say that the Bay-breasted broke about a dozen birder's hearts that morning by not showing up at all. My heart was broken on the other hand by the Canvasback who was also a no-show.

After much lingering in the area and not seeing anything interesting except for a cooperative Spotted Sandpiper and American Robins playing tag, my wife and I were just about ready to leave. Just then something different flew into the tree where the Robins were. It was a Red-naped Sapsucker! And then another one flew in to the same tree. For the next half-hour or so, we played hide-and-seek with these lovely birds, them doing the hiding and we doing the seeking. The joggers and picnickers who saw us running from tree to tree, all the while pointing our cameras in every direction imaginable must have thought that these couple in camos had gone loco.

When the sapsuckers finally flew off to a densely leafed pine tree, we gave up the chase and hoped that we have gotten good enough photographs of the woodpecker-like bird.